How Does Apple Make Money? Breaking Down Apple's Revenue in 2022

How do tech companies make money? This article is exactly about this, and to be more precise, we decided to take top tech companies one by one. In the spotlight is Apple, and we invite you to discover how Apple makes money.

First of all, we must agree that Apple products and services are at their peak of popularity and have brought solid revenue growth in the past several years. If we take a closer look at Apple products and services that bring money, it is obvious that iPhone sales are the major source of revenue and will probably continue to be so for the next 4-5 years But, the entire list of Apple products and services that has an impact on the revenue is:

Since 2008, the iPhone is the most valuable product Apple has released in terms of revenue. Apple has sold more than 1 billion iPhones so far, and the revenue share is estimated to be 50%. 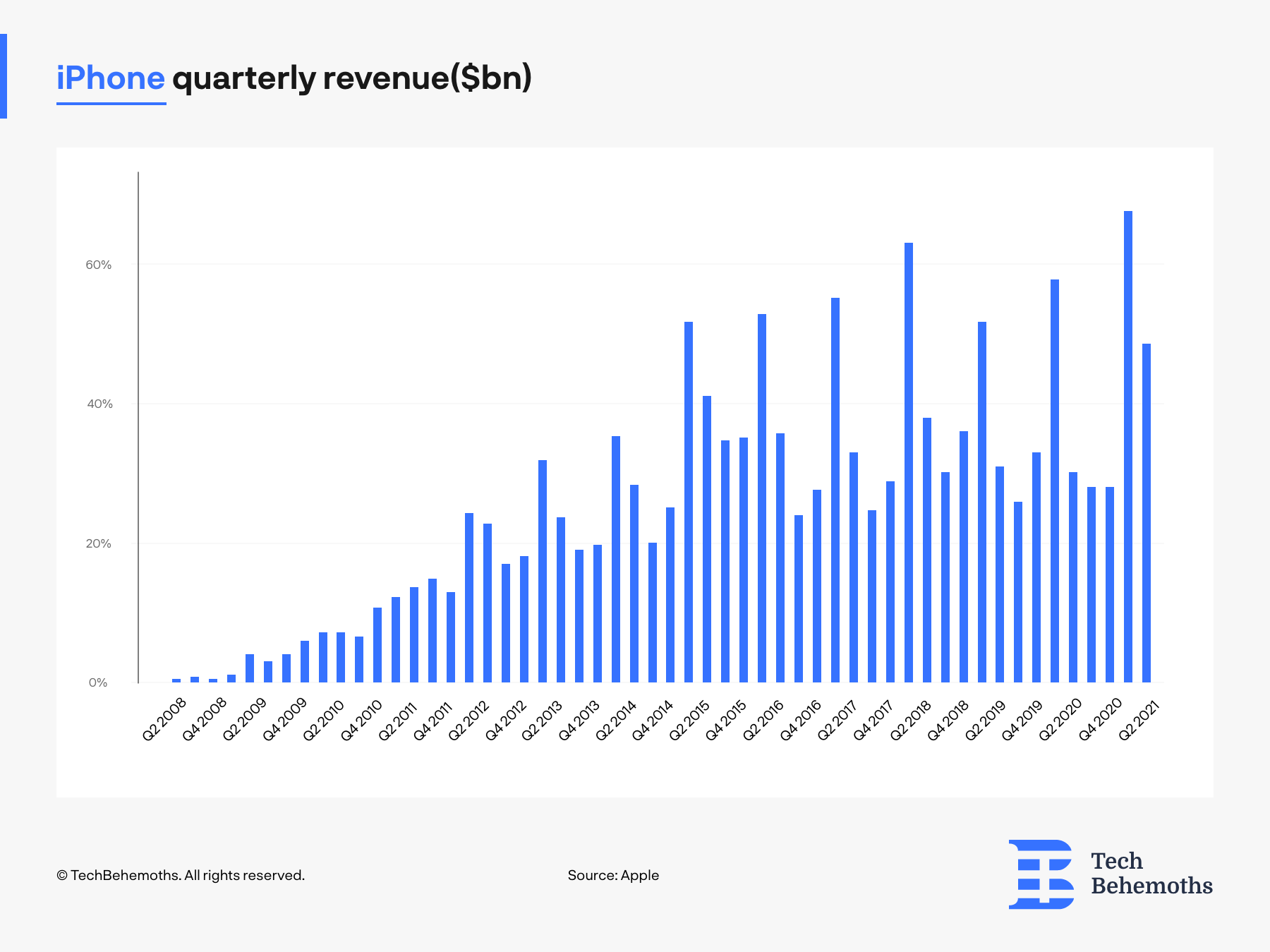 iPhone is most popular in the US, and on the American market, which was expected to be so. Europe holds second place in terms of sold devices, while China occupies the 3rd position. Also, another thing worth mentioning is that since 2015, iPhone gets two times less sales from the Chinese market - from 71.2 million to 34.9 million. In Addition to that, Apple failed to penetrate emerging markets such as Mexico, Brasil, Pakistan, or India - losing an important long-term development opportunity. 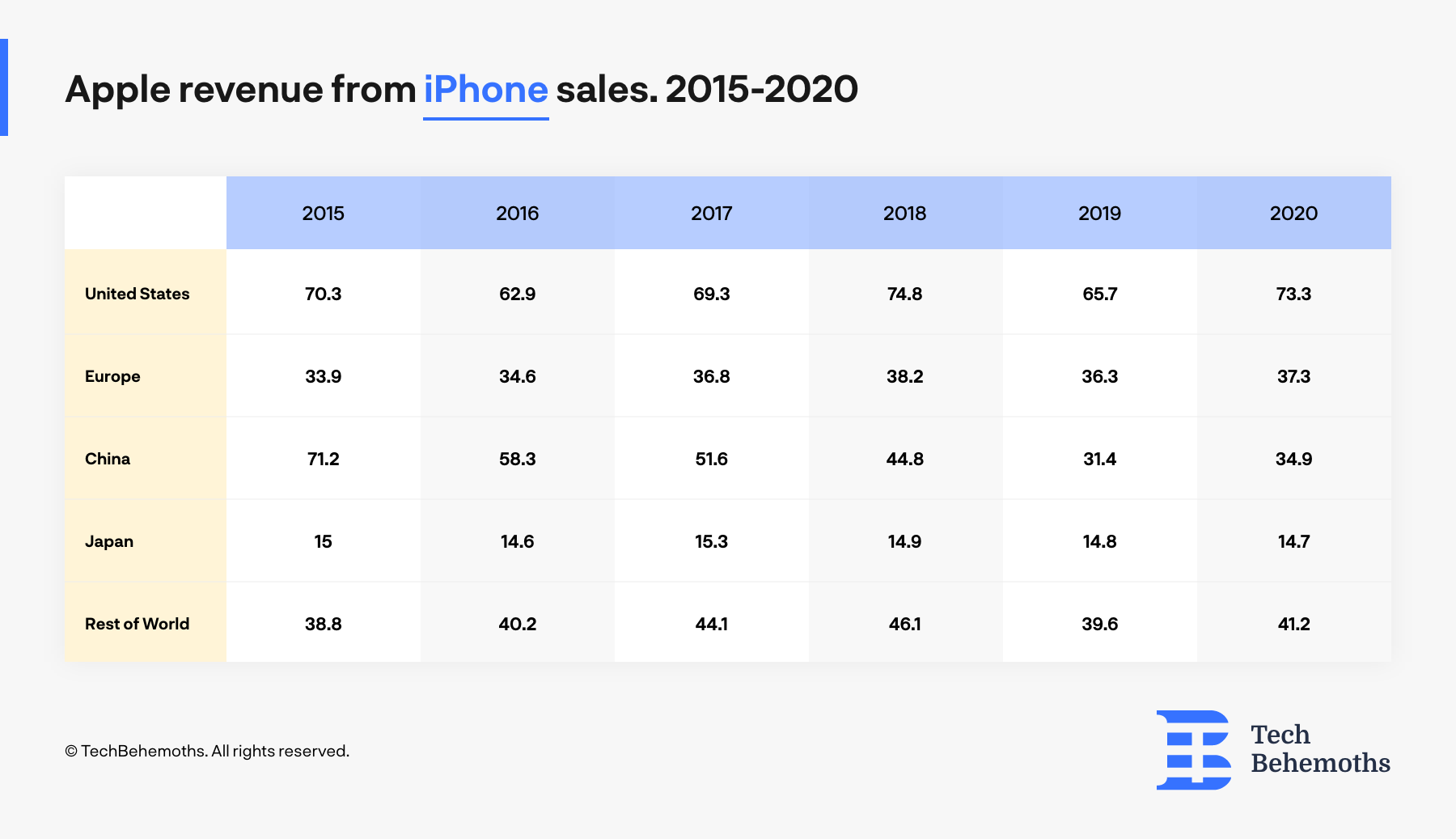 However, the number of new iPhone devices has increased twice over the past 5 years. But if we look back to 2008, then the numbers show a growth of 1000% 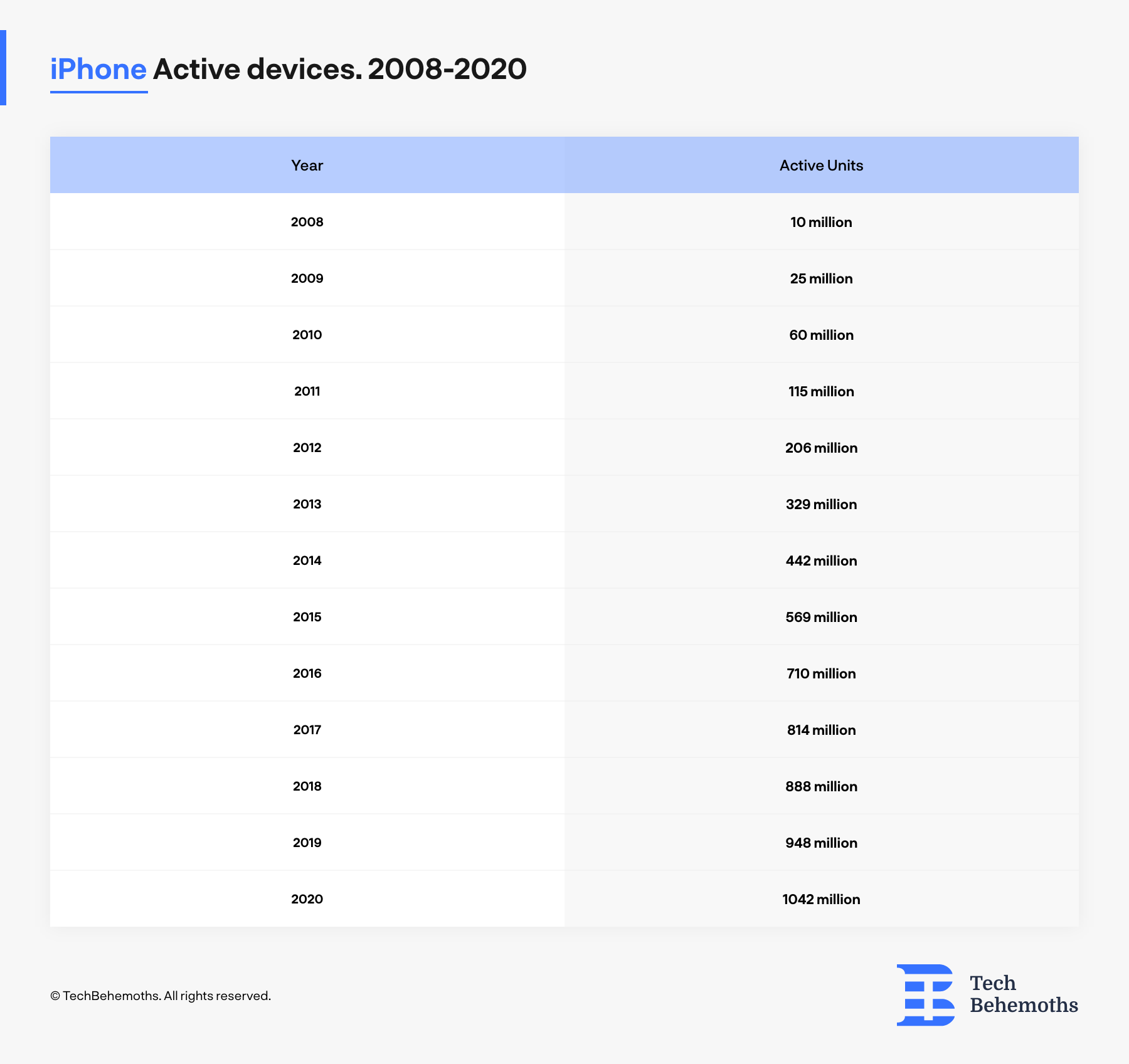 The iPad and its launch was a hot topic, once the iPad mini was released and became a hot topic on the market. The overall sales in the first year it launched only from iPad were estimated at $19 million, a good score but not as much as Apple expected. But in 2013, when the device was at its peak, the sales of iPad grew up to $30 million. 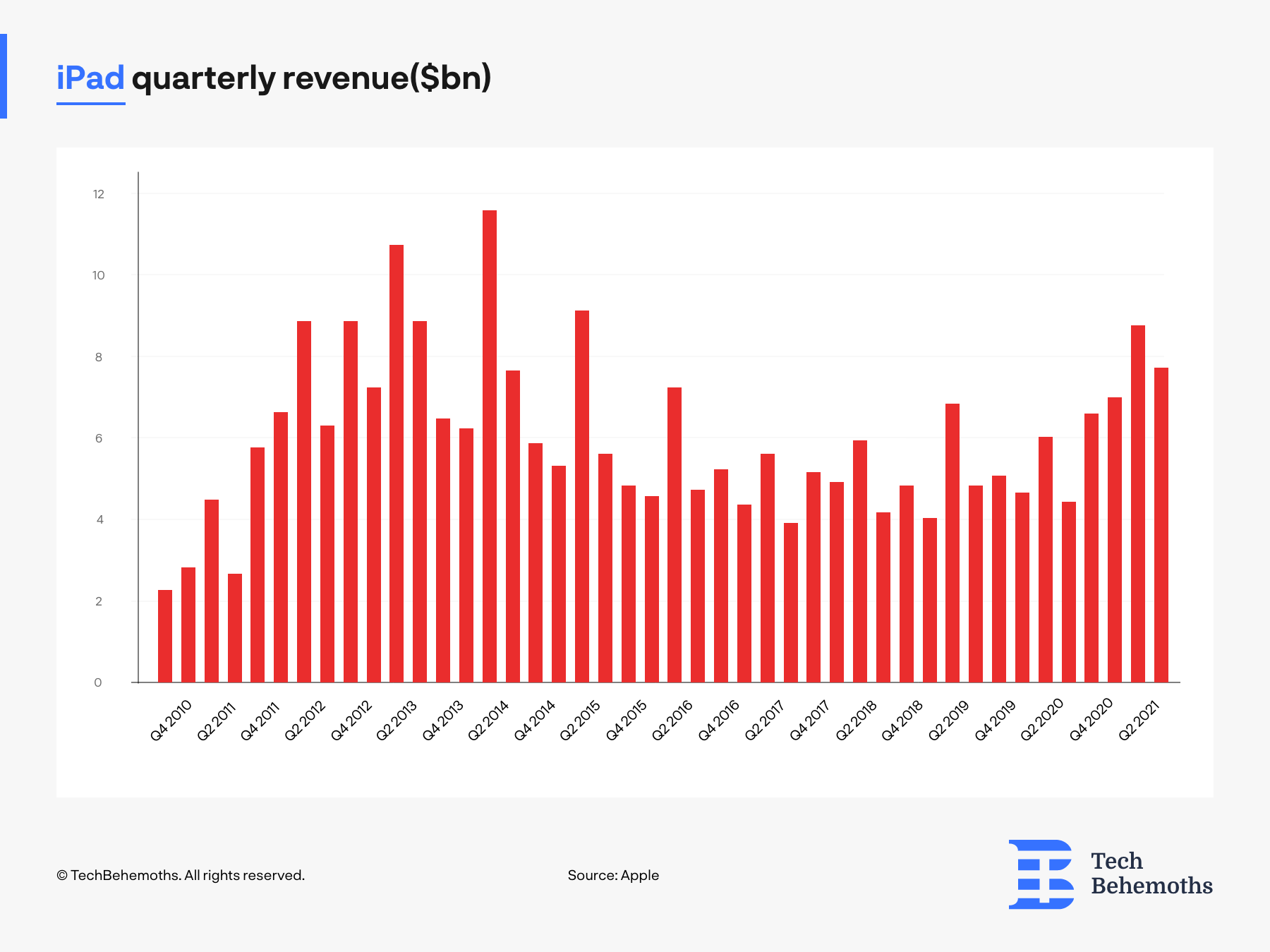 The iPad sales revenue dropped at ~$23 billion since 2015 and continued to keep the same rate no matter the specs and the news it brought to digital tech. But the real reason behind it lies not in competition, but in how popular tablets are. Smartphone screens are getting larger each year becoming phablets, and come with new technical specifications that only the iPhone can compete with. Moreover, the transformer laptops have also reduced the tablet users, such as iPads. 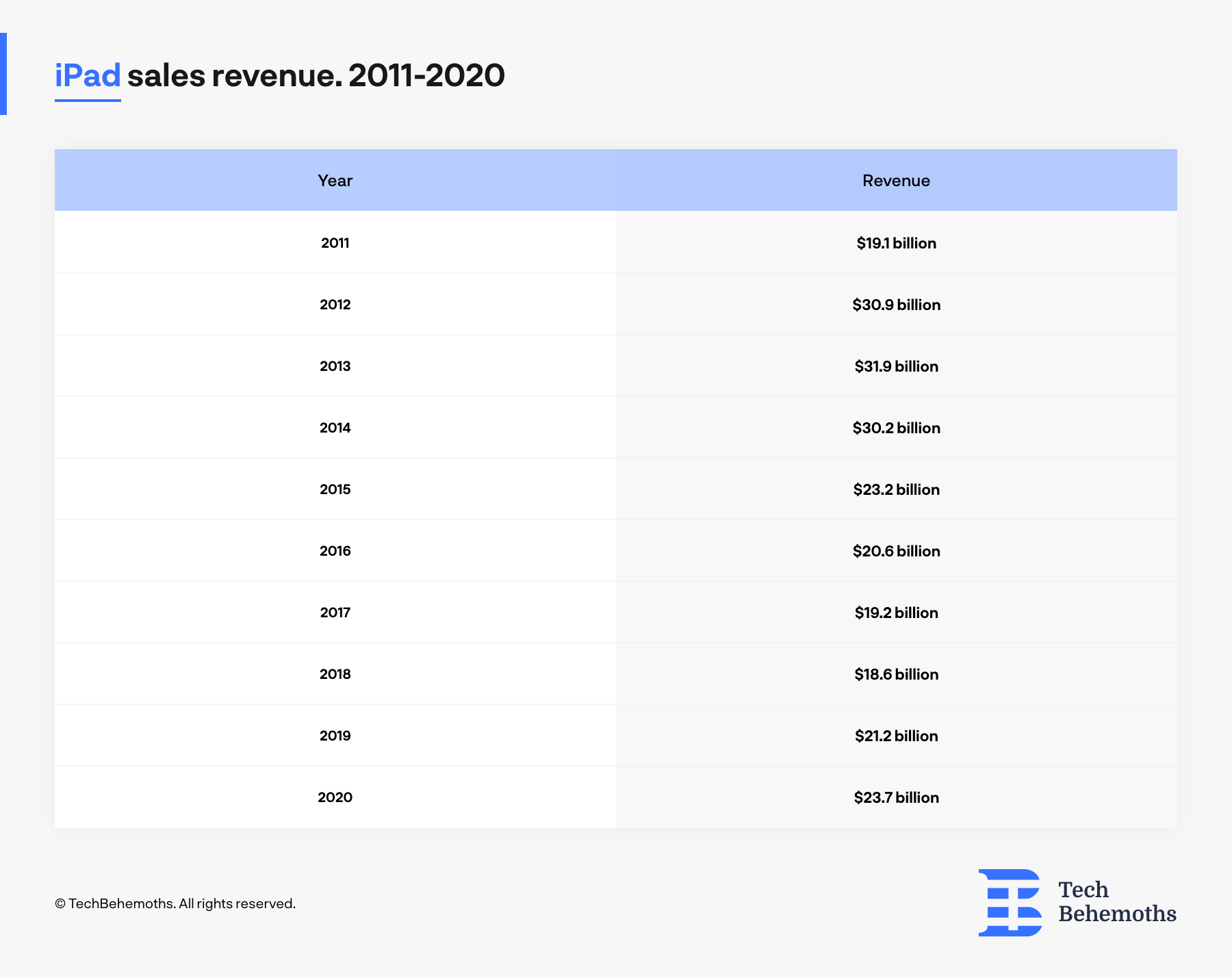 However, the Apple product and service range go beyond this, making out of their next release a new hit. The Apple Watch has also become an important source of revenue for the Silicon Valley tech giant. Since it was launched in 2015, Apple Watch continued to be an important accessory of the entire Apple ecosystem. The gadget’s popularity and sales were enhanced even more once it was “approved” by FDA back in 2018. To be more precise, the Apple Watch is considered Class II. And for Class II and Class I, FDA doesn’t give approvals, it gives only clearances. Now, when it comes to sales, the gadget is being sold in continuous growth. Only between 2019-2020 the sales went up from 30.7 million devices to 43.1 million devices. That’s a 40% increase, and in the next year, the numbers are expected to grow up to 50 million devices.

Compared to Apple Watch that can be activated only with an iPhone, a thing that restricts in a way the number of sales, AirPods have limitless compatibility with both Apple and Android devices, but also with desktop and any other Bluetooth devices. This is one reason why the AirPods were sold to more than 100 million pieces only in 2020.

But the sacred behind the scene is not limited to compatibility alone, but also quality and brand. Apple succeeded to create that piece of audio technology that gives users a premium feeling and comfortable wearing.

Even though AirPods are relatively new to the market, they managed to conquer most of the US and European markets. Back in 2017 when they were just launched as the first generation, people looked skeptical about their performance and usability compared to other sound giants on the market. But between 2019-2020 the sales growth went almost double - from 60 million devices in 2019 to 114 million devices in 2020

How Does Apple Make Money From HomePod?

Compared to other gadgets and Apple devices, Apple HomePods has made lower sales, a thing that was expected. And if in the case of iPod the competition had nothing to do with the sales performance, the HomePod case is exactly the other way around.

Amazon and Google are long before Apple in the industry and managed to match the consumer preferences and needs when it comes to virtual assistants. Apple’s HomePod is a limited success, it’s less visible on the market and is not so well-promoted as other Apple devices. Things go even further, and Apple stopped the HomePod production as of March 13, 2021.

How Does Apple Make Money From Apple TV?

Apple TV was launched in 2015, and it is one of the most popular services of its kind in the US. And there is a good reason why it is popular mainly in the US - The Apple TV app is not available in other countries, but can be accessed through a VPN service, which complicates things a bit for users.

Roku, on the other hand, is Amazon’s top service of the same type as Apple TV, and 50 million units ahead of Apple TV, although it’s also available only in the US. With all these, Apple TV sales are growing slowly but surely, and probably in the long run will reach the same level Roku is at this moment.

How Does Apple Make Money From Mac Devices?

Mac is another story for Apple when it comes to sales and revenue. With its main focus on mobile devices and gadgets, Apple’s Mac continues to bring continuous growth and more sales each year with every new device launched.

No need to mention Mac usability and its benefits compared to other similar devices that run on competing OS, MacBooks and iMac are extremely popular in the US and Europe for both home and business users.

With $9.1 billion in revenue in Q2 2021, Mac sales beat their previous records, especially after M1 processors were launched and new series devices are running on it. The new technologies not only boosted their sales but also are considered an important stimulus for competing companies to launch and run devices based on an improved or similar technology Apple is using for desktop and mobile devices. 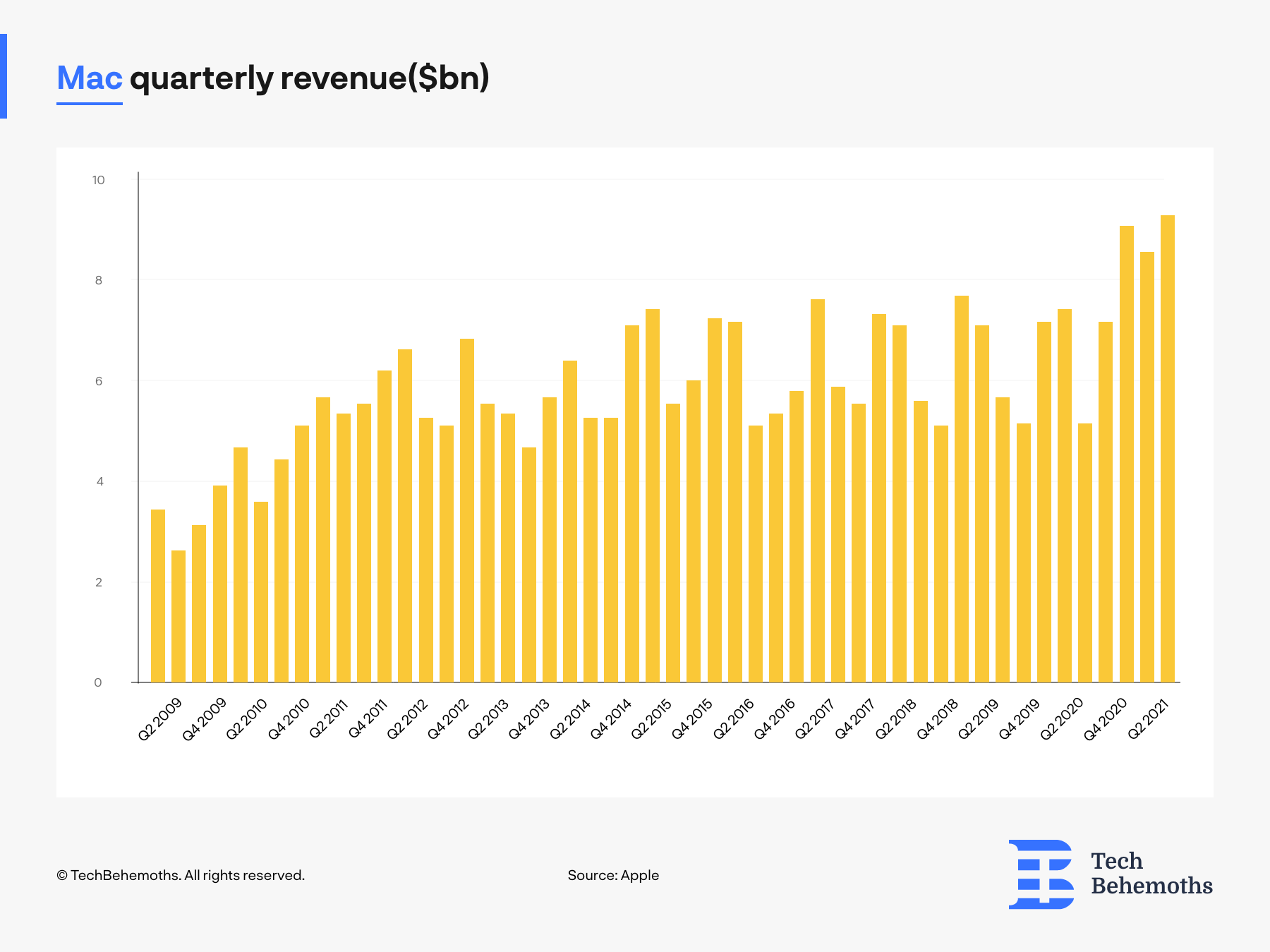 On the yearly revenue, Mac got most of its revenue in 2020 so far, with an estimated new record in 2021. To be more precise, $28.4 billion Mac devices have been brought to Apple treasury in 2020 alone. That's $3.7 billion more than 2019 when Mac devices were still running on Intel processors and using third-party GPU.

Overall what makes Mac devices so popular is more than just technology. The looks, the feeling, and the touch combined with hardware make Mac devices premium devices 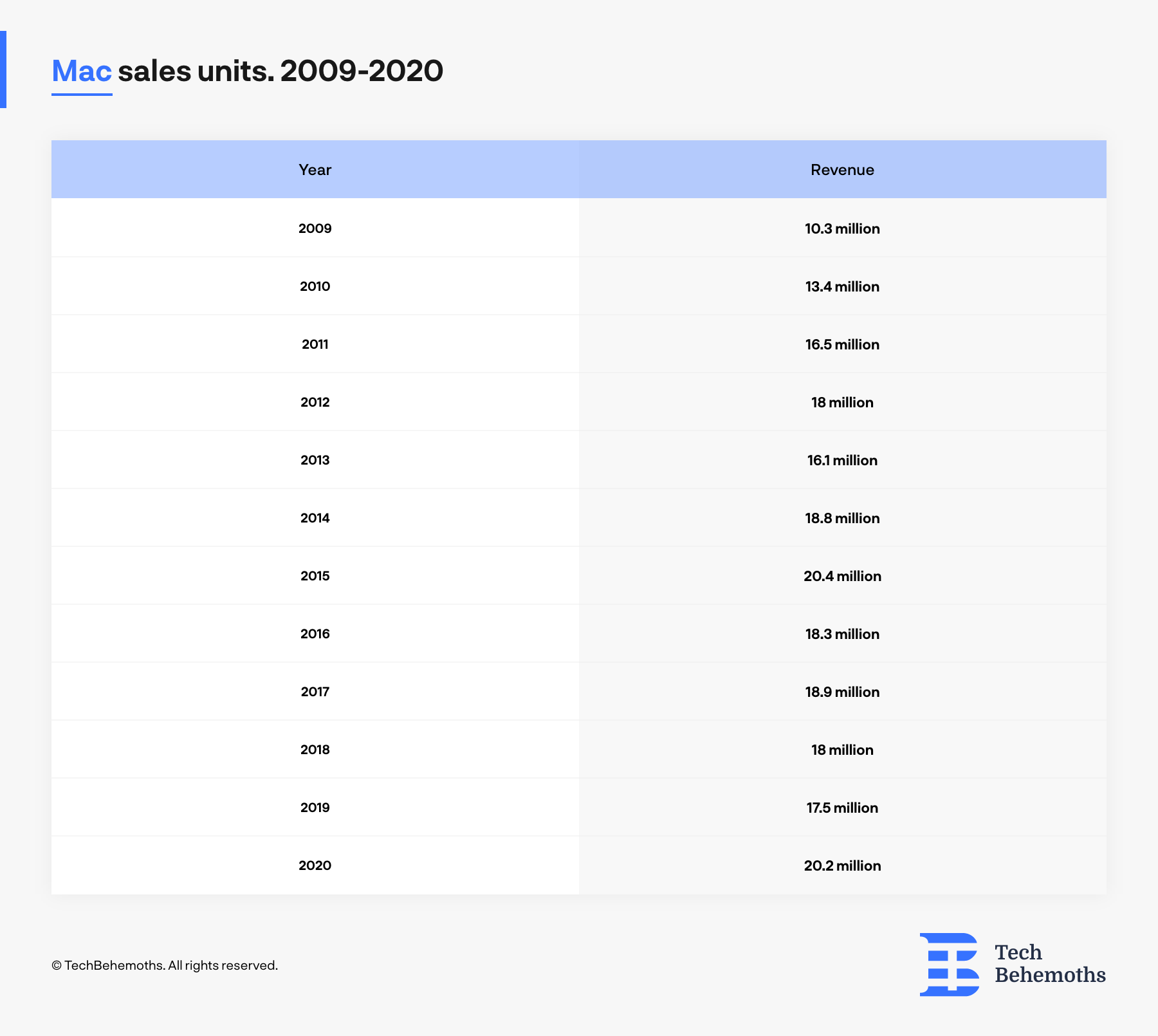 How Does Apple Make Money from Apple Services

In addition to gadgets and devices, Apple services also play an important role in the financial reports of the company. As an extension to their products, Apple services come in hand for most Apple users. Or, in other words, the services enhance the feeling of being part of the Apple ecosystem.

On the other hand, iCloud, iTunes, FaceTime, and Health apps are not public to anyone officially, and thus, relying on unverified data would make more assumptions than concrete facts. That’s why these services are not included in this research.

However, the general numbers related to Apple services are accessible, and the figures are impressive, confirming that Apple does not rely on hardware alone. 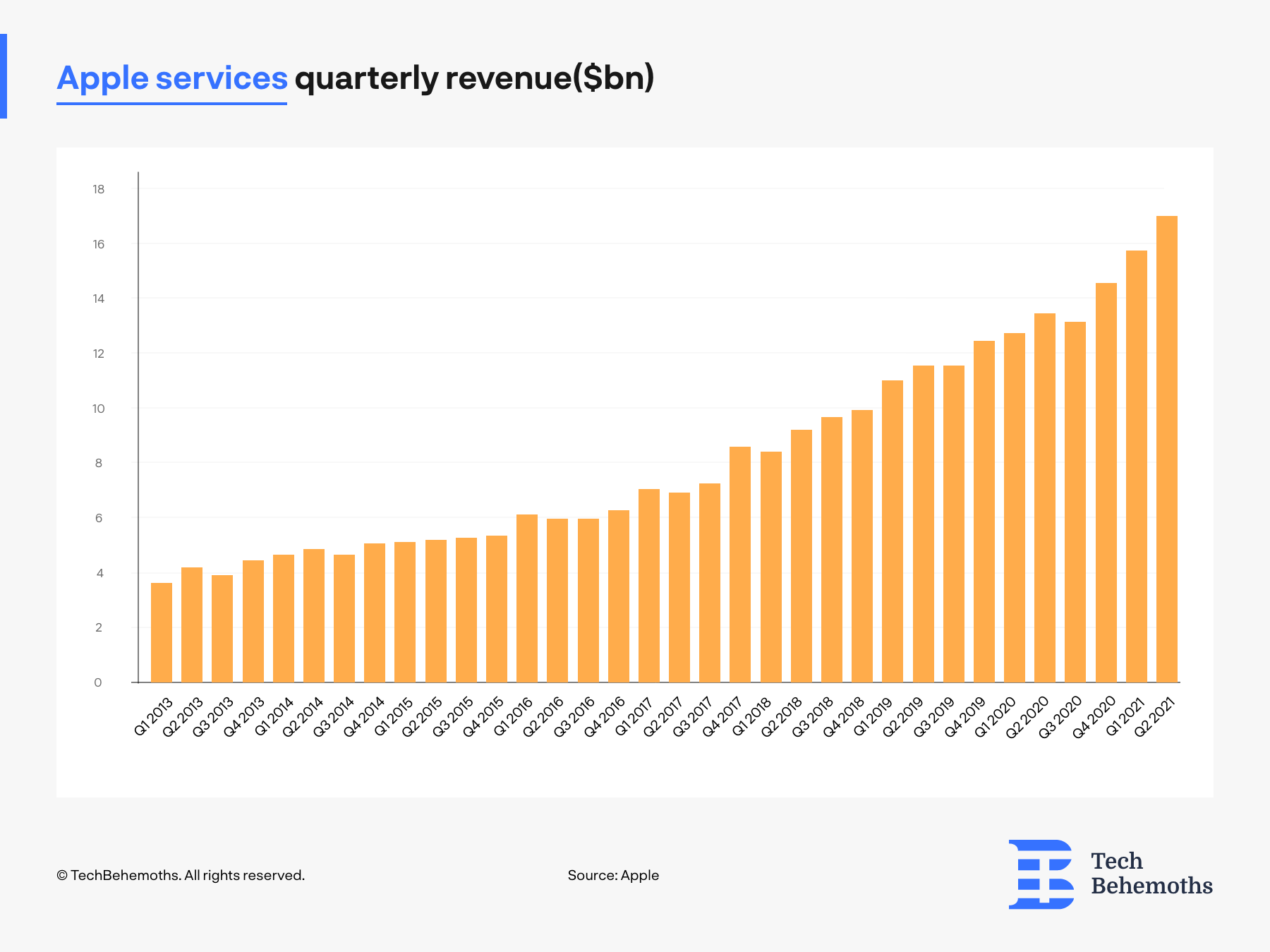 But the surprise is yet to come: according to Forbes, the revenue from Apple services might be $50 billion, which is 2.3 more than the figures from Q2 2021. When it comes to subscribers, Apple is also doing pretty well, with more than 620 million people using their services, free or paid. Compared to 2019, when the number of subscribers was 480 million users, we can notice a significant increase and it may be because of the pandemic, or it is about new features and updates implemented, combined with the total number of devices sold in the same period. 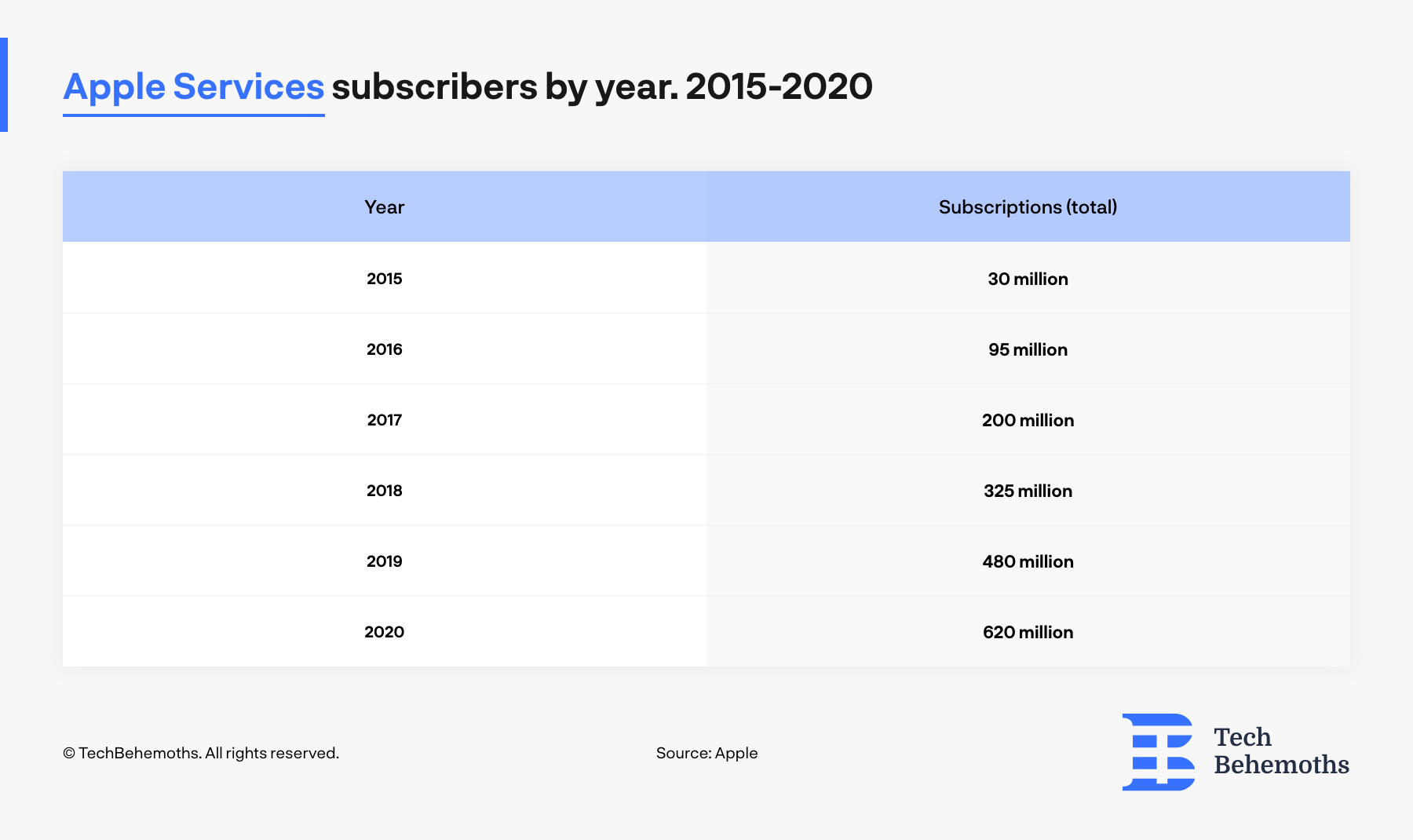 How Many Apple Pay Users Does Apple Have?

Yet, according to Apple, the transaction volume via Apple Pay doubled between 2018-2019. In this way, 6.6 billion transactions were performed in 2018 with Apple Pay, and in 2019, the same Apple Pay transactions increased up to 15 billion which makes it almost triple.

How Many Apple Music Subscribers Does Apple Have? 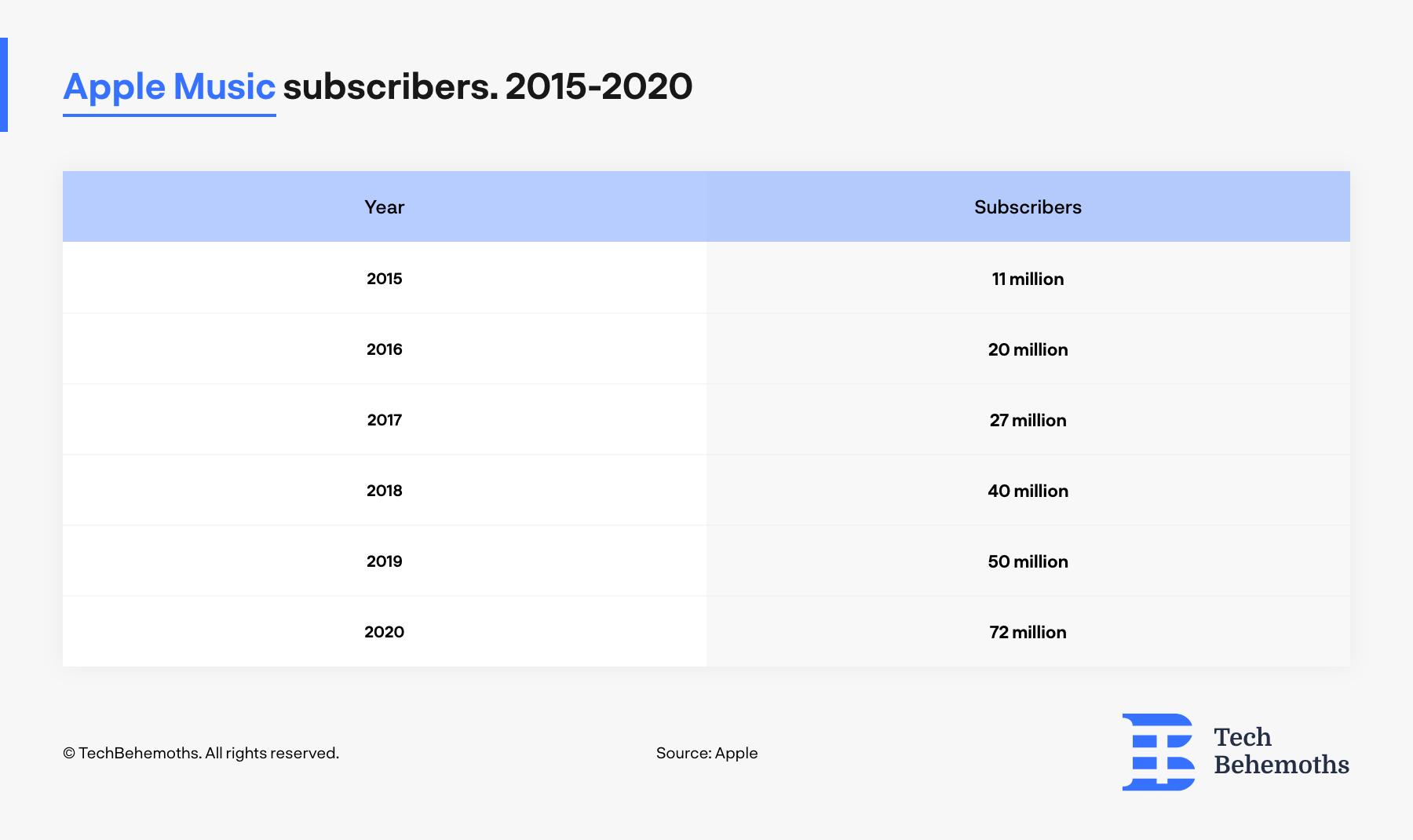 In contrast, Apple’s closest competitor Spotify has about 158 million paid subscribers around the world.

This article is part of the How Tech Behemoths Make Money series. In our related researches you can find out how Microsoft, Google, Facebook, and Amazon make money

Do you own an Apple produt?