How does Amazon make money? Breaking Down Amazon's Success 2022

Amazon is one of the richest companies in the world with a market cap of $1.7 trillion. Amazon’s revenue comes from multiple sources, which diversified even more from 2015 by 2021. This research is exactly about this topic - how Amazon makes money from all its sources.

So, there are two ways about Amazon’s revenue and markets.

How Does Amazon Make Money By Market Segment?

Amazon’s segments include three different sources of revenue and are a combination of locations and products. Those three segments are North America, International, and AWS . The majority of technology infrastructure costs are allocated to the Amazon Web Services (AWS) segment based on usage. The majority of the remaining non-infrastructure technology costs are incurred in the US and are allocated to the North America segment. There are no internal revenue transactions between reportable segments. These segments reflect how worldwide the chief operating decision maker evaluates its business performance and manages its operations 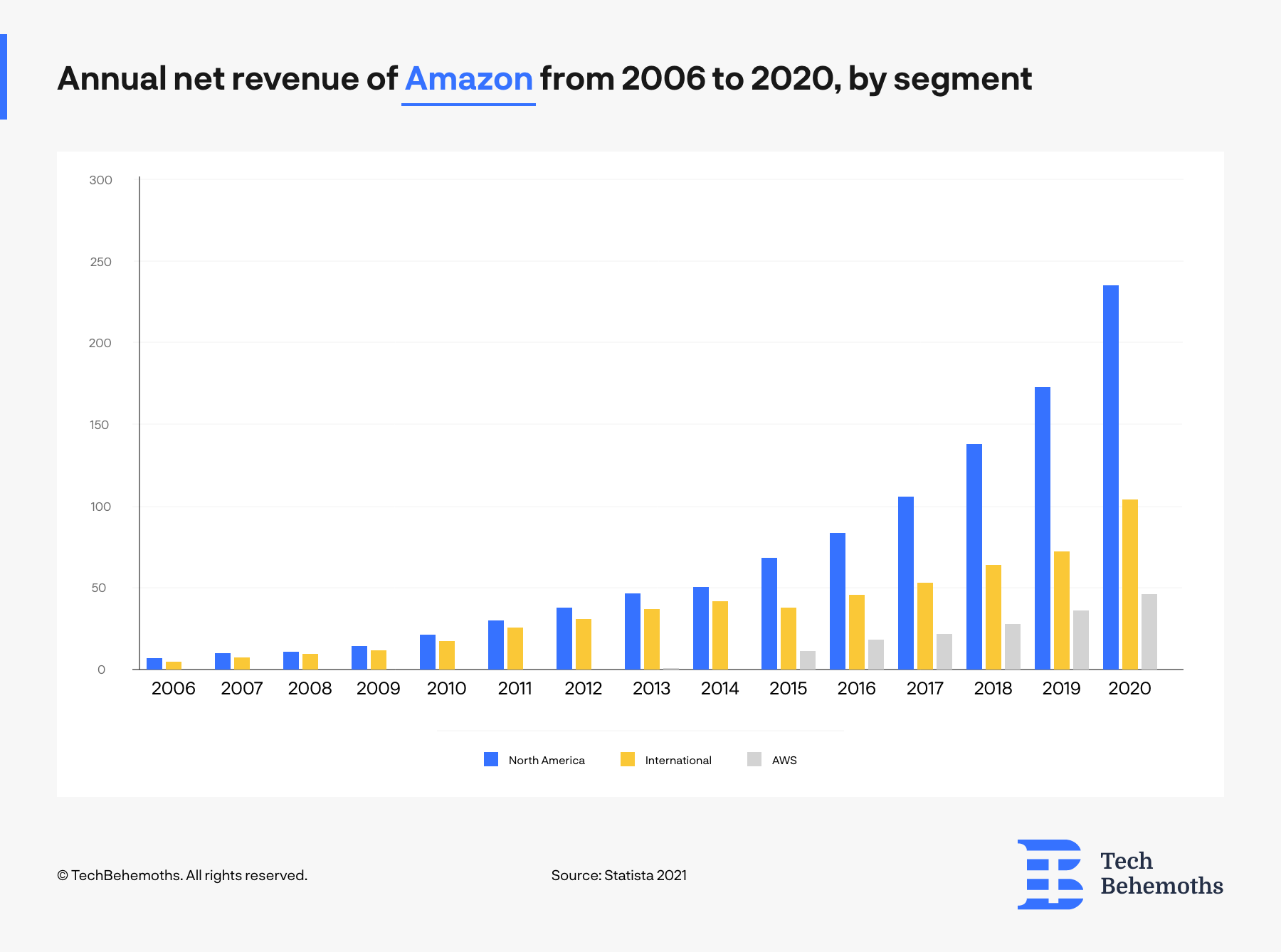 The North American segment includes retail sales of consumer goods and subscriptions across the entire North American market. Most of all, the sales in this segment are done via websites like amazon.com and amazon.ca. But also their affiliate partners. 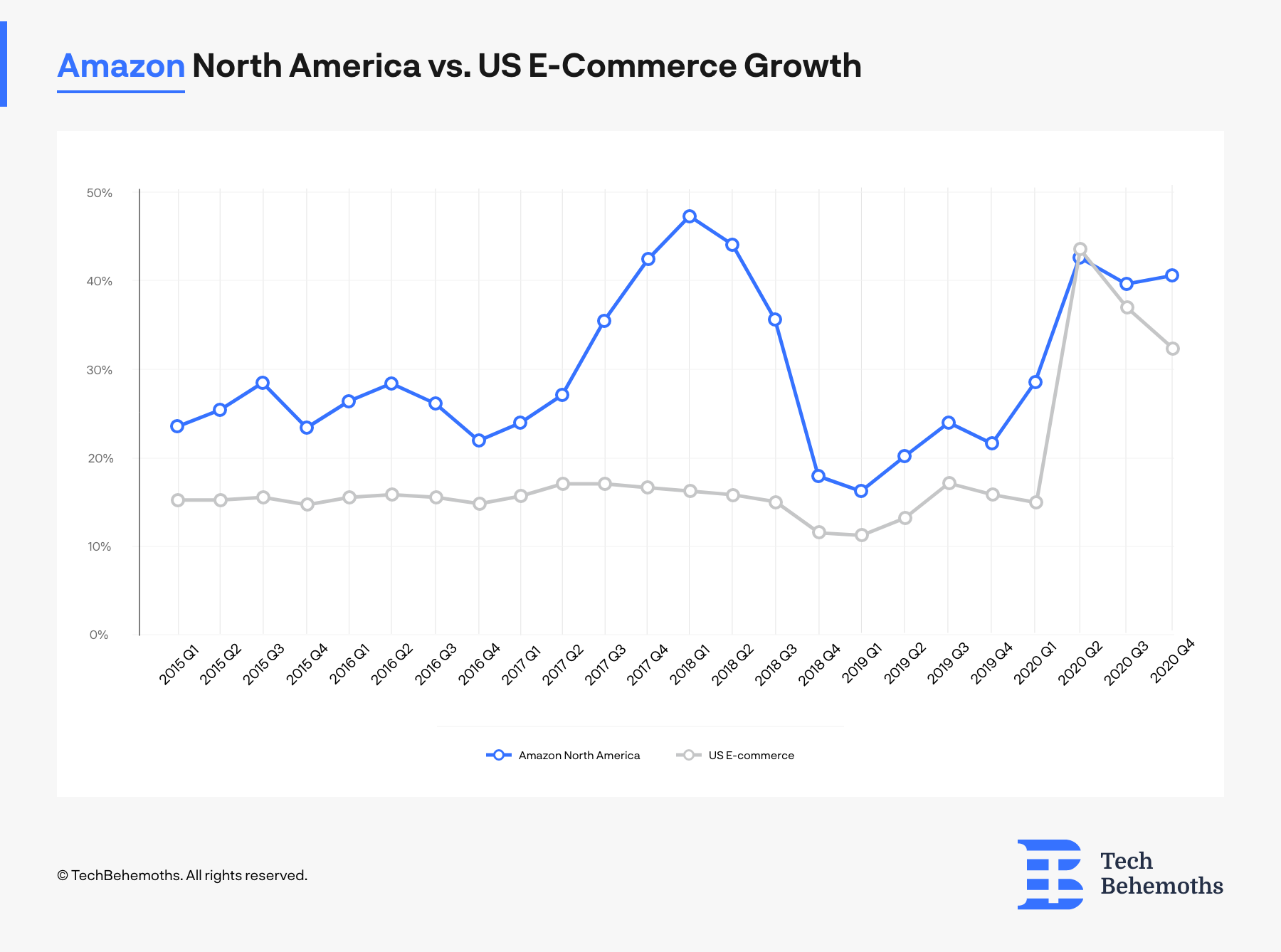 The numbers show that Amazon North America Segment has grown significantly in 2020, and the data can be compared with 2018 when the same segment reached nearly 50% growth. Yet if it is to compare in billions, the numbers are much higher than in 2018. 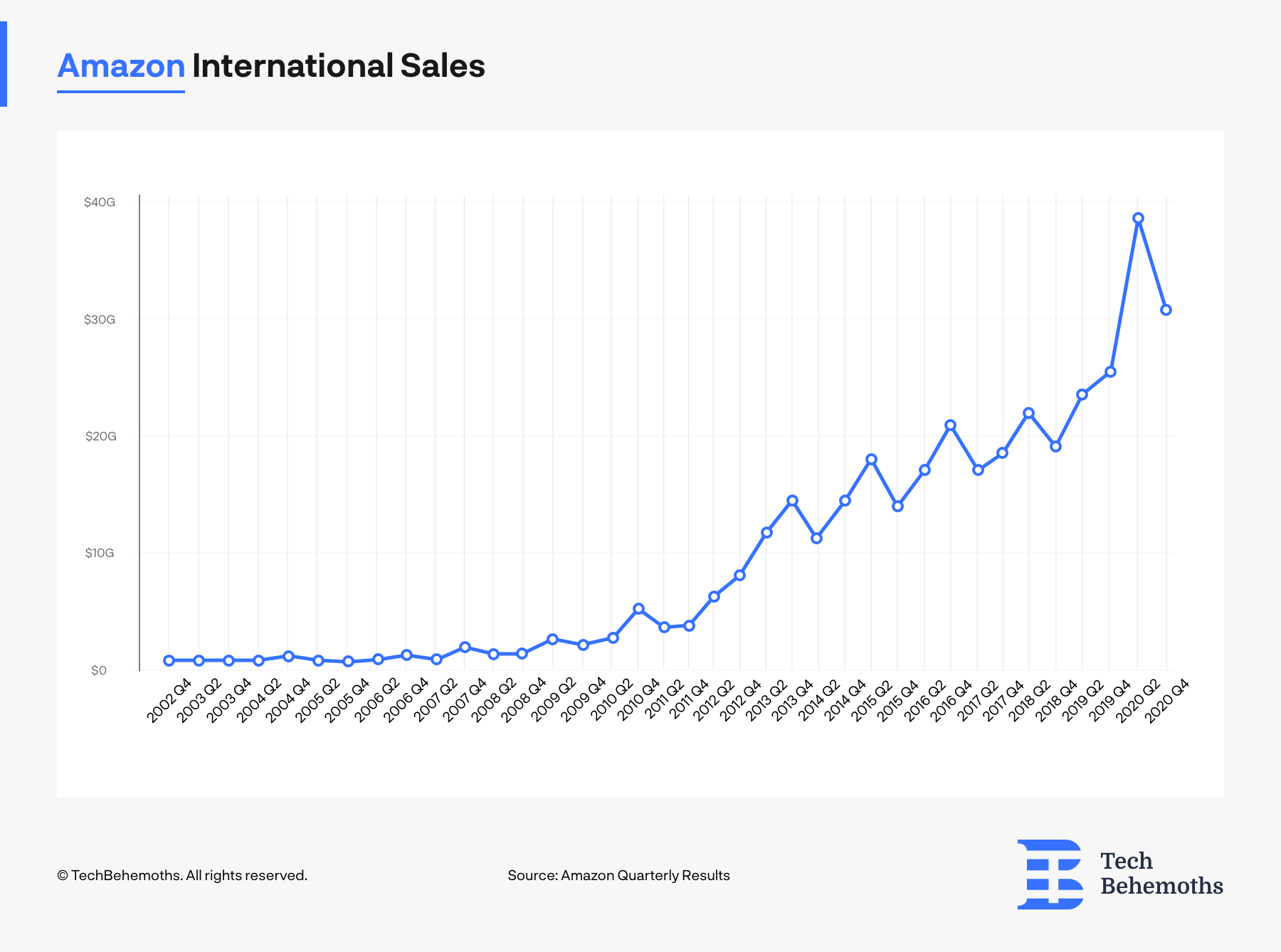 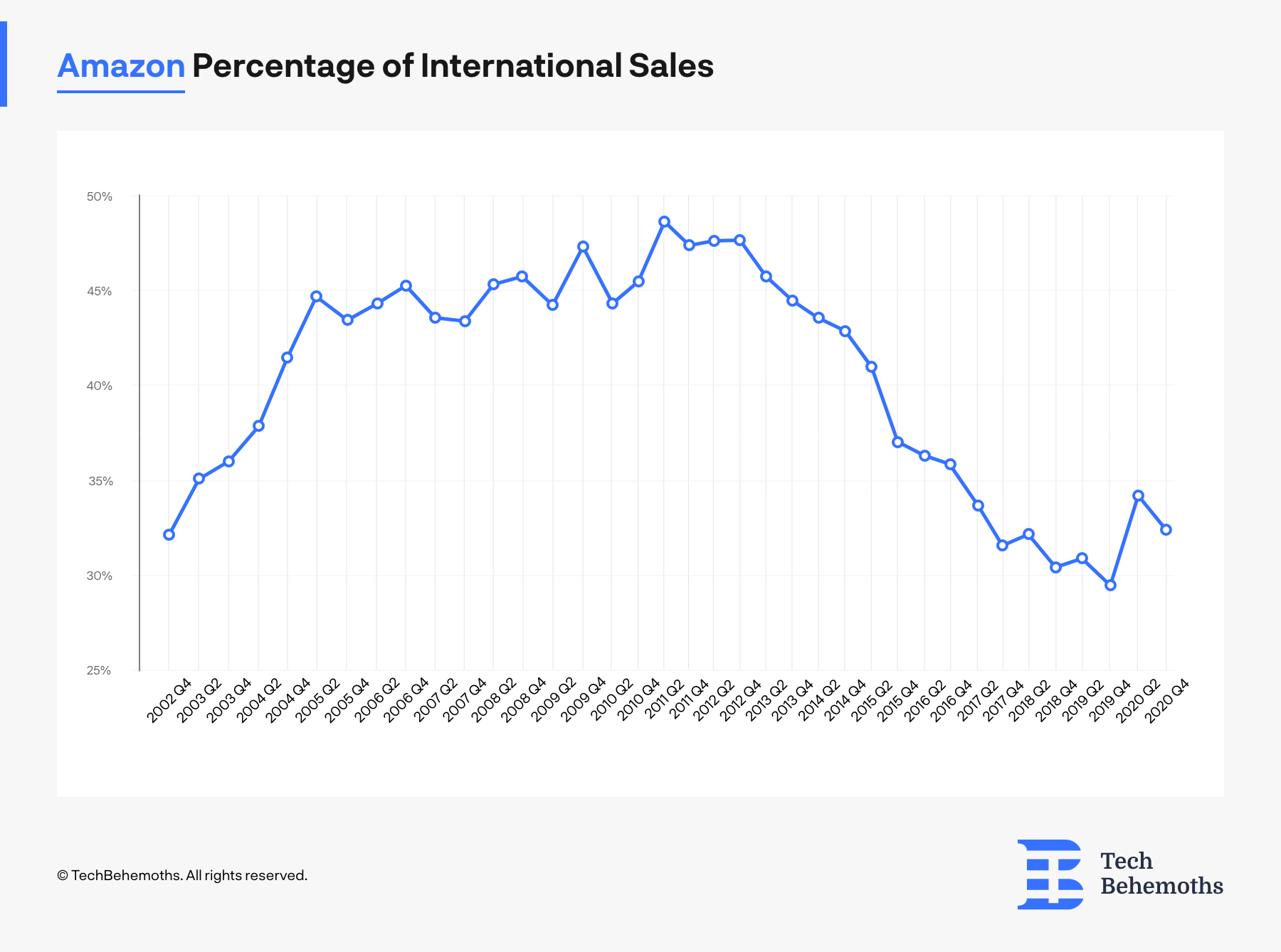 Moreover, the lockdown has been a considerable barrier for Amazon, but also for other large companies like Alibaba to ship products abroad and thus, increase their international sales. On the other hand, things should come back to normal in Q3/Q4 2021 if the pandemic evolution stabilizes.

How Amazon Makes Money From AWS

The Amazon Web Service segment consists of all digital services and products regardless of their geographical end-customer location. The AWS includes services such as compute, storage, database, and other services for companies, startups, and governments but also to other entities interested in acquiring Amazon’s Web services.

In Q1 of 2021, AWS contributed $ 13.50 billion in revenue which is 12.4% of the total revenue. AWS sales increased 32% in Q1 2021, compared to the prior year period. The sales growth primarily reflects increased customer usage, partially offset by pricing changes. 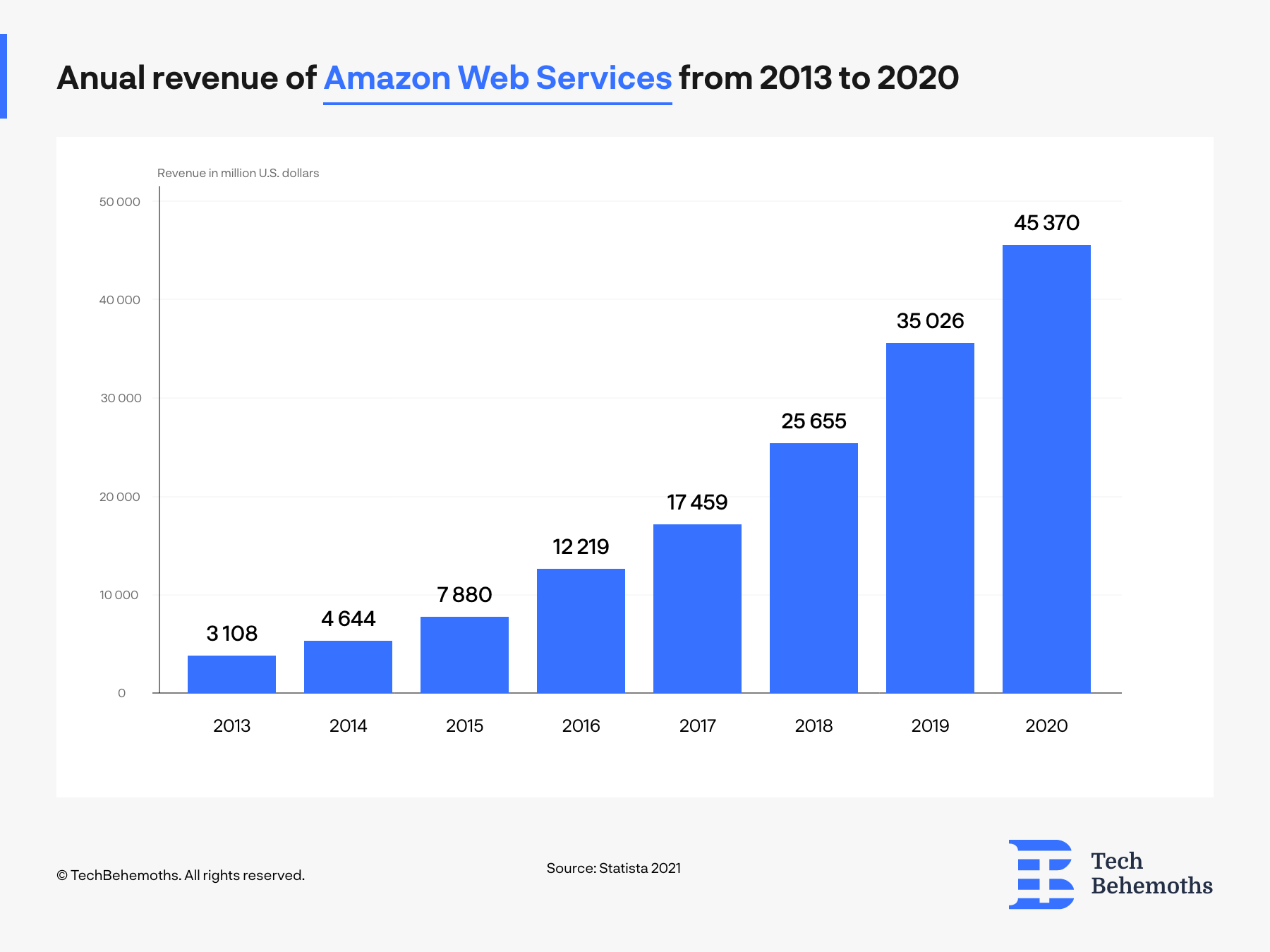 In addition to Q1 2021 growth, Amazon Web Services have never registered downgrades in sales. This is no surprise taking into account the progress and overall revenue growth the company has registered overall. 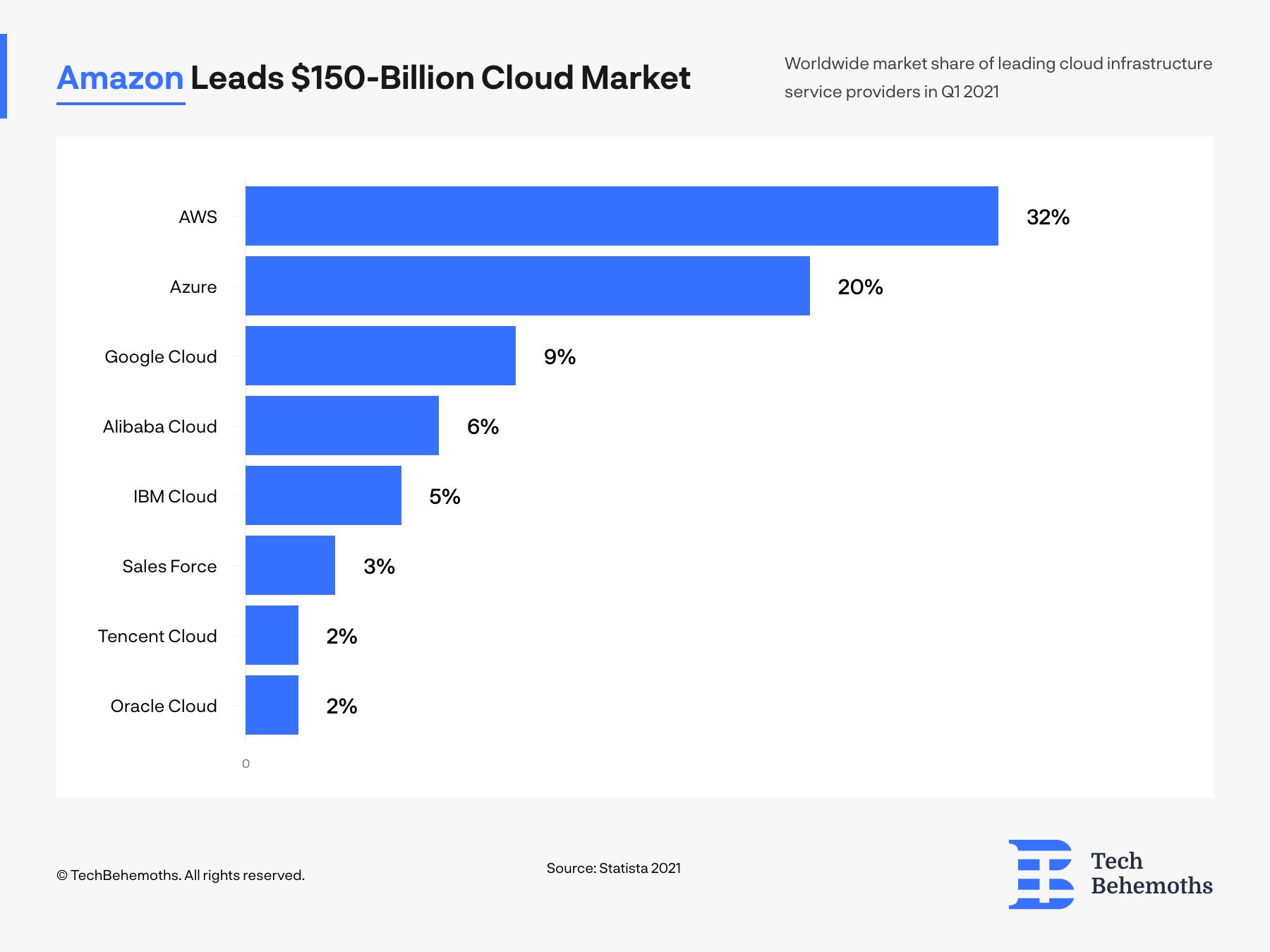 Having established itself as an early leader in the market for cloud infrastructure, Amazon Web Services (AWS), the online retailer’s profitable cloud platform, is still ahead of the pack. According to estimates from Synergy Research Group, Amazon’s market share in the worldwide cloud infrastructure market amounted to 32 percent in the first quarter of 2021, still exceeding the combined market share of its two largest competitors, Microsoft and Google

The second way on how Amazon gets its money is by product group. This means that all markets + AWS are now divided differently. Overall there are millions of products Amazon sell, but they can all be grouped in 3 segments:

Amazon recently started reporting the number of sellers worldwide with over $100,000 in sales a year as a metric to understand the health of the marketplace.

From 200,000 in 2018 it increased by 12% to 225,000 in 2019. The number of third-party sellers grows a bit slower compared to all other types of AWS segments, but brings enough revenue to Amazon, and is definitely a profitable business for both sellers and Amazon. It works pretty simple for everyone: You have the product, they have the image and the platform. Once you integrate your shop with Amazon, you will be able to increase your sales.  From what Amazon made public, here are the statistics for third-party sellers worldwide: 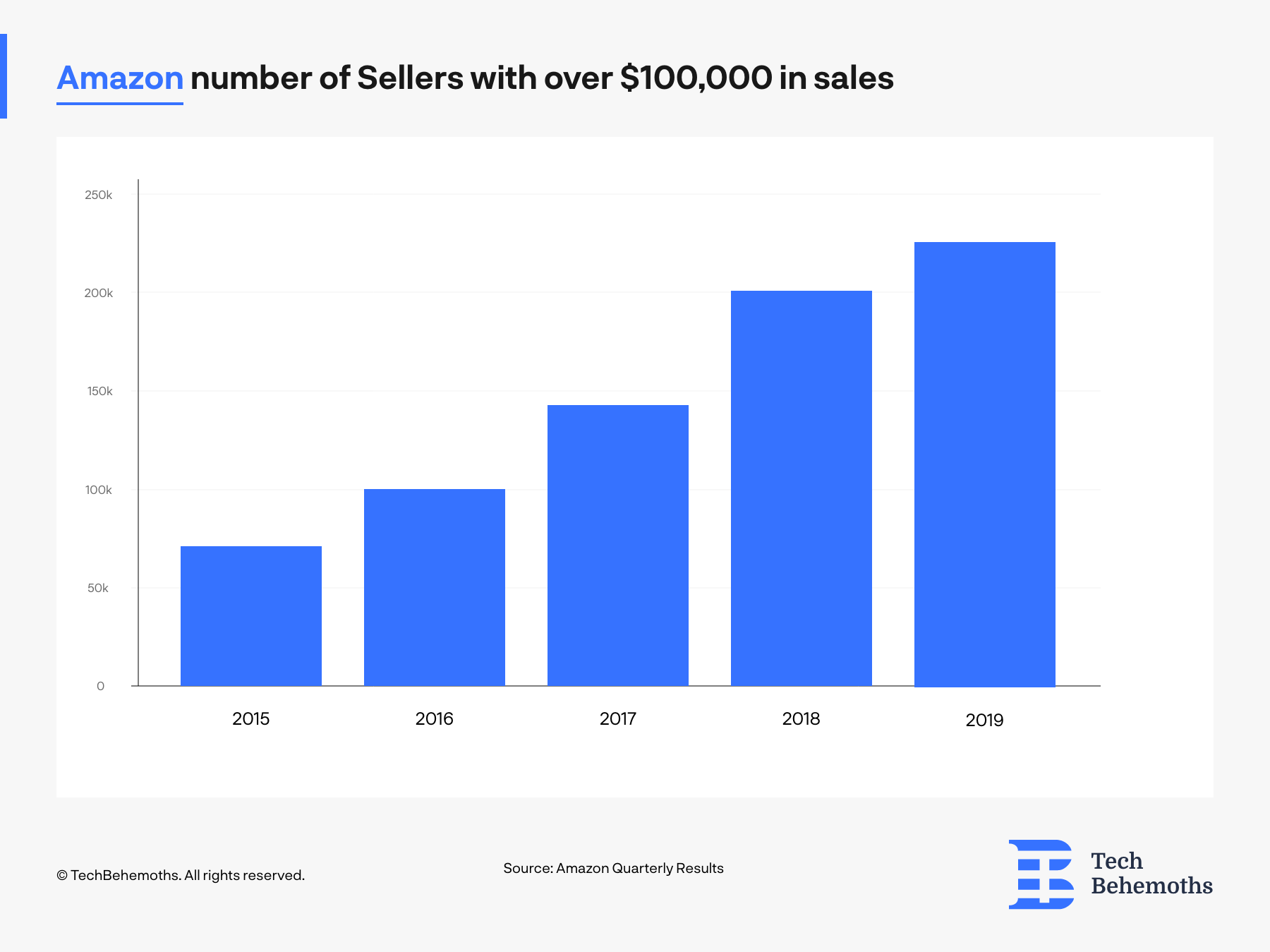 The revenue from all third-party sellers has grown exponentially over the past 6 years, which confirms how things are progressing within this industry for Amazon. Yet there is a small drop in 2021 Q1 that compensates the growth from 2020 Q4. 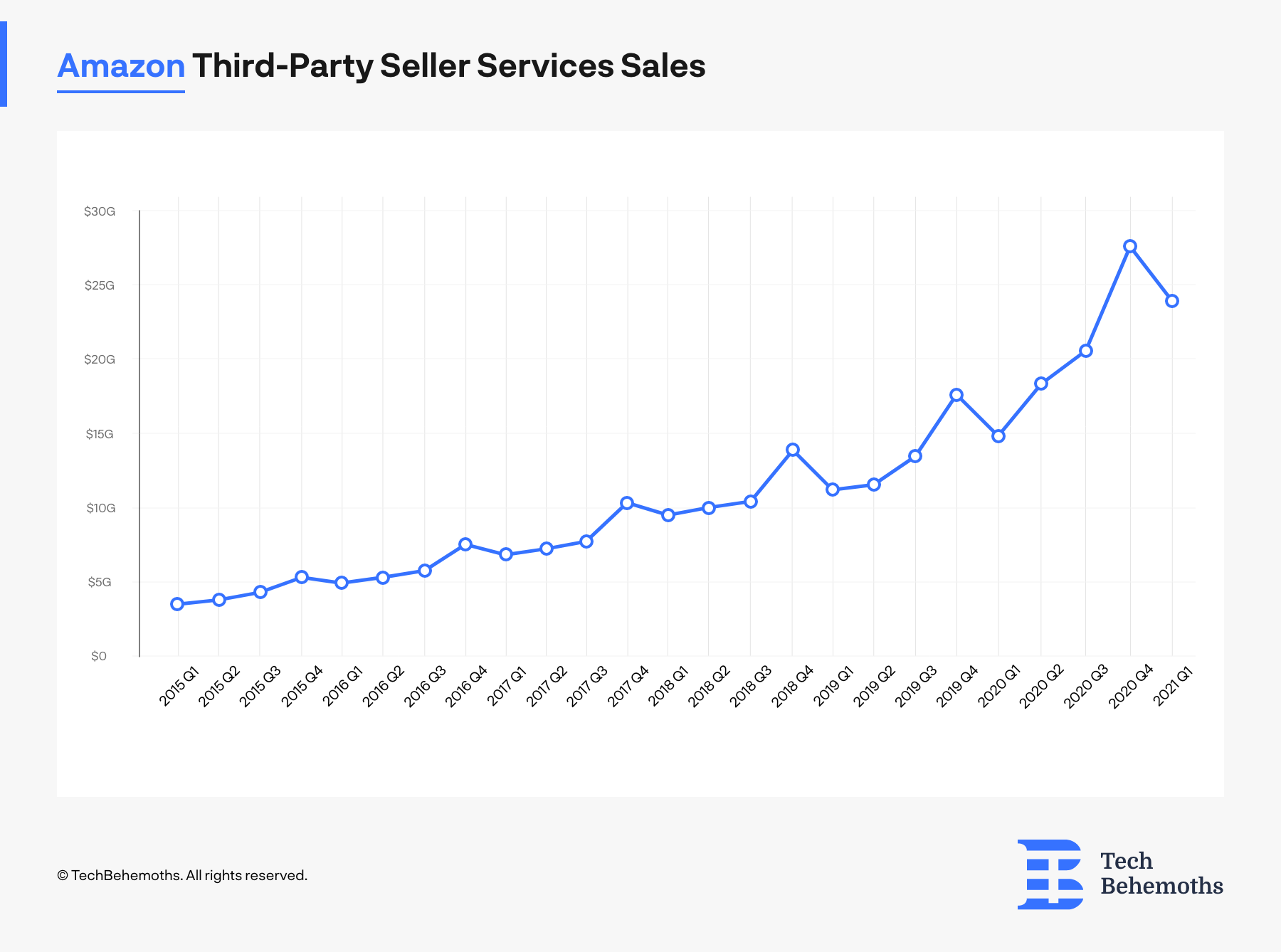 E-commerce is another main source of revenue for Amazon. Since 2017 the numbers have grown exponentially, and are estimated to grow further for at least the next 5 years. In addition to the ease of use and benefits it offers, Amazon E-commerce is an ecosystem capable of interacting with all markets and product segments. In 2019, Amazon was estimated to have generated over 346 billion U.S. dollars in retail e-commerce sales annually. E-retail sales of the company are projected to reach 468.78 billion U.S. dollars in 2021. Amazon is the world's largest online marketplace as measured by revenue and market capitalization. 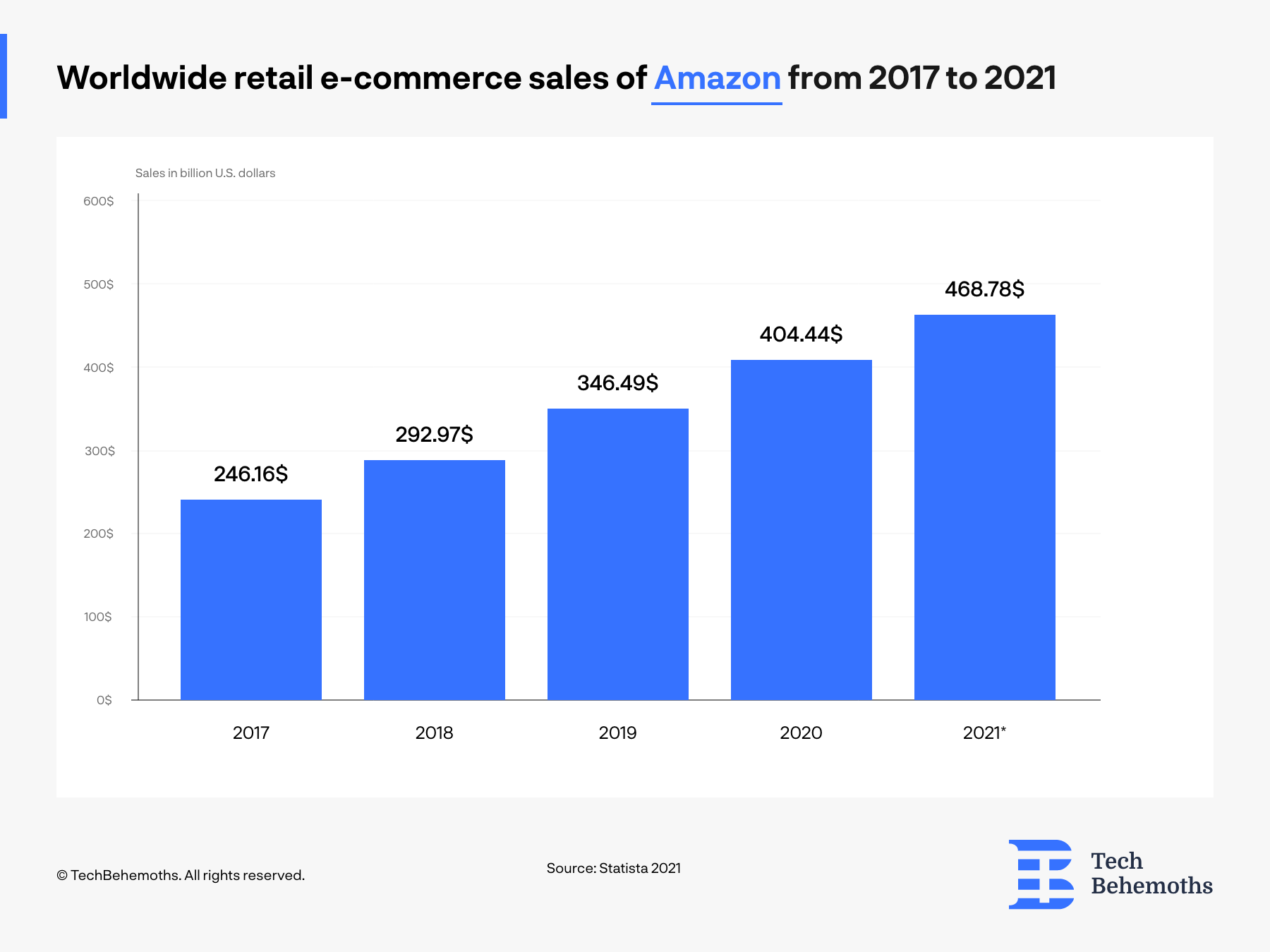 Last but not least important source of revenue for Amazon is the Subscription Ecosystem. From Amazon Prime to kindle and music streaming the subscription services from Amazon are wide and not totally undiscovered by many markets, such as the Chinese one - where it faces restrictions but also has competitors able to win locally. 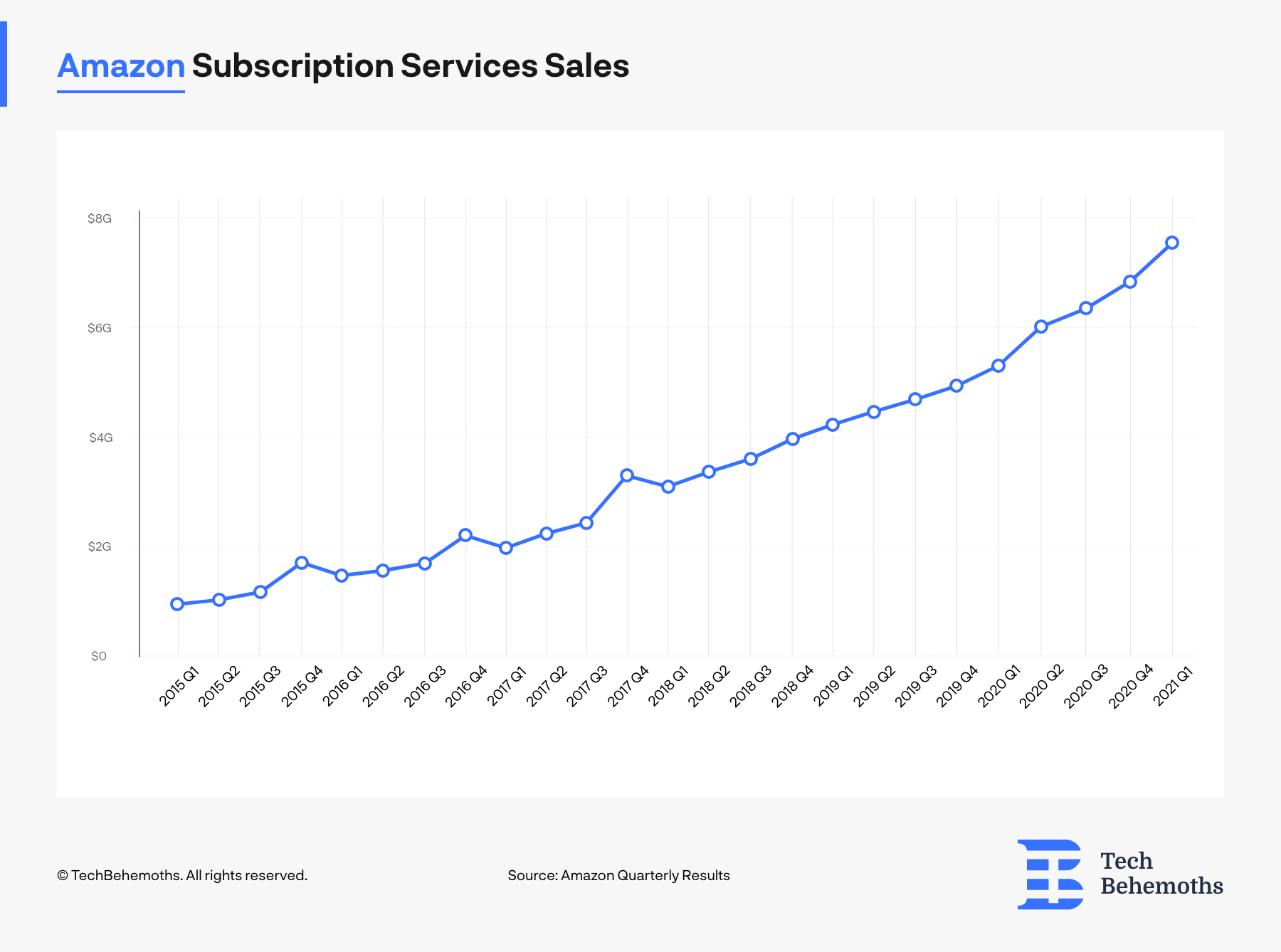 FACTS  AND STATS ABOUT AMAZON