How does Microsoft make its billions? Microsoft revenue breakdown 2022

Back in the 90’ Microsoft was only about Windows - the first OS that went on global scale usage, and it was the only usable option for a long time. But over time, when new operating systems and devices became available, Microsoft had to review their financial and technological policy and start selling in other fields.

Now, in 2021, the question about how Microsoft makes money is still trending, and in this article, we will try to figure out together all the income sources of Gates’ tech giant.

First thing’s first and just before we dive into the financial story, we should identify the major sources of revenue Microsoft has:

So, there is a good portfolio for Microsoft which in its turn provides a series of exclusive services, or competitive at least. Some of them were invented by them, others were acquired in time and transformed into digital masterpieces, Microsoft proved that it doesn’t really matter where your products and services come from if you handle them well.

Now, for the anxious ones, here is a quick preview, to understand the large picture of Microsoft revenues: 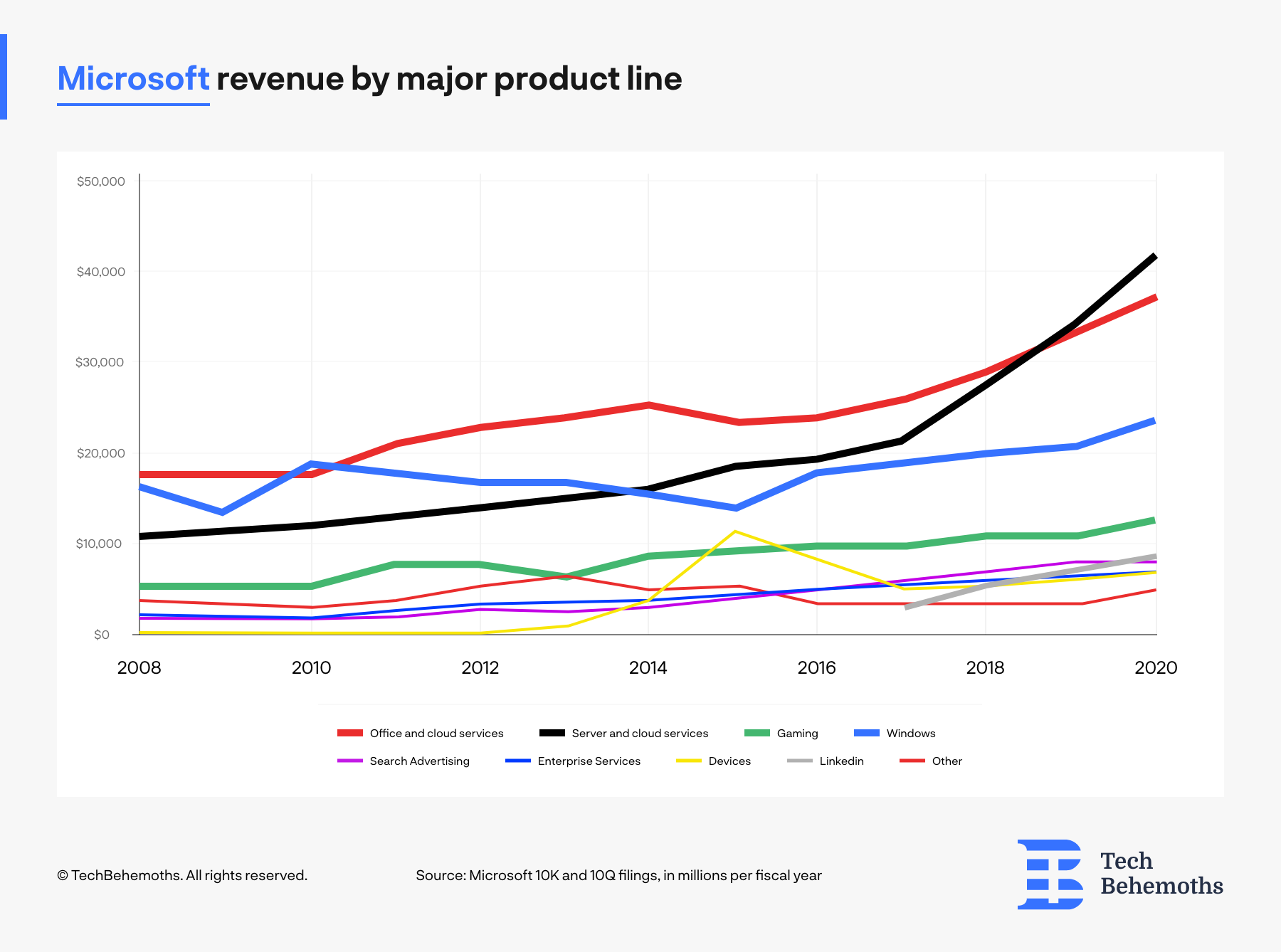 The cloud business from Microsoft has a story behind starting in October 2008. It was named Microsoft Azure, and it is referred to as Azure. The codename for Azure is “Project Red Dog” and it was formally released in 2010 when Windows Azure transformed into Microsoft Azure.

Since then, and until 2021 Microsoft Azure is a top cloud service provider competing with Google Cloud and AWS from Amazon.

Microsoft Azure is a cloud computing service that is meant for tasks such as testing, deployment, and managing applications and services thru Microsoft-managed data centers. Azure provides SaaS (Software as a Service), a platform for PaaS (Platform as a Service), and IaaS (Infrastructure as a Service). In one sentence, full business kit for businesses that need digital services.

In 2020 Microsoft’s Azure growth rate accelerated once again, up by 50% to boost its market share in the global cloud services market to 20%. Microsoft has focused on driving Azure consumption across all customer segments through annuity sales programs and customer success investments, as well as targeted incentives for its global partner channel. It has also benefited from continued high demand for Teams, Windows Virtual Desktop, and other Microsoft services running on Azure as lockdowns tightened.

Now, Azure is not the top 1 leading cloud computing provider, as Amazon’s AWS is on top, but it is the second-largest on the market. 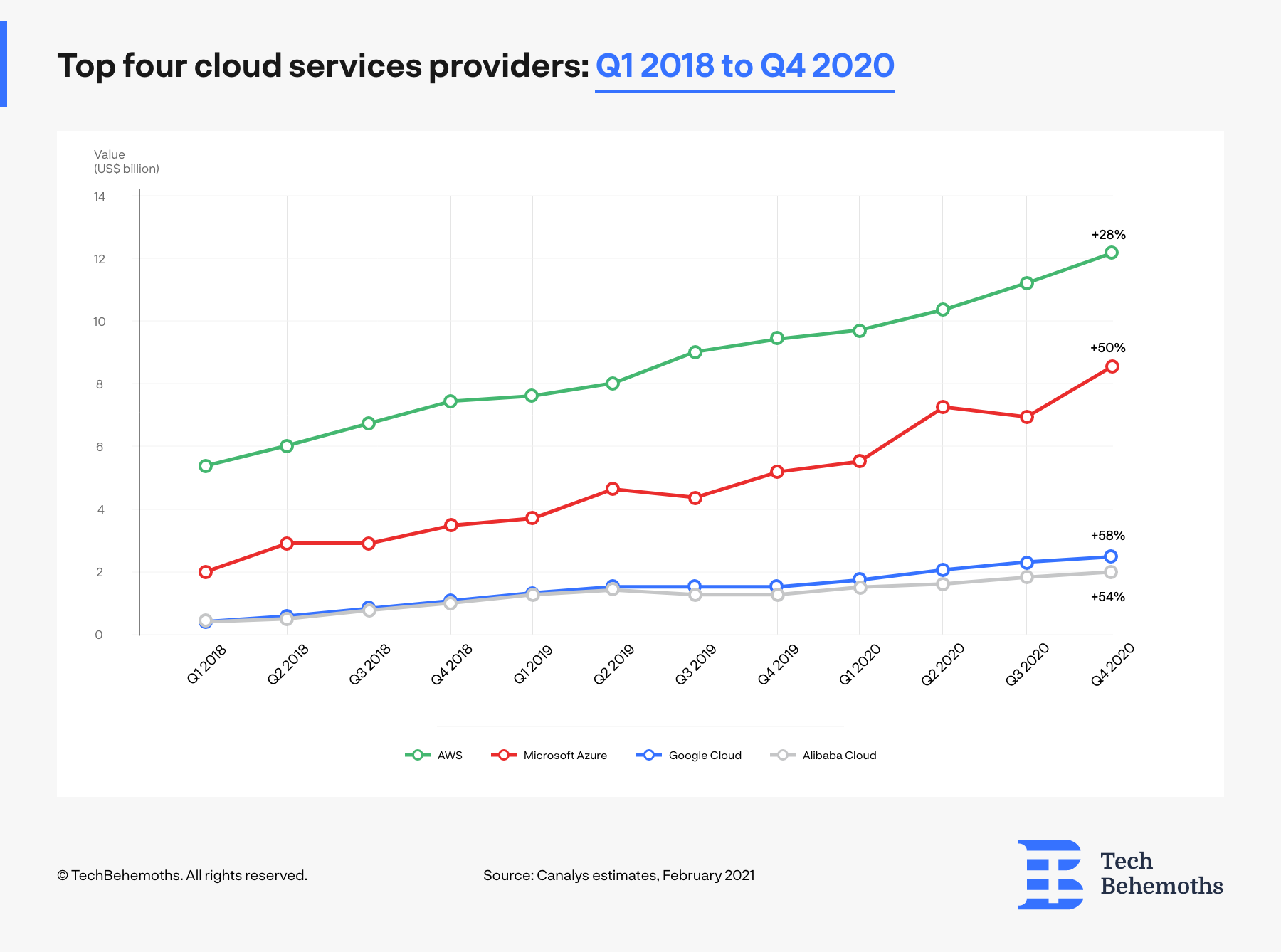 How Does Microsoft Make Money From Windows

The Windows direction from Microsoft is split into 2, as well as the revenue, financial reports, and other official data. So, the two components that form together Windows revenue for Microsoft are:

Technically, you get the same Windows in both cases, and for end-users, there is no difference. However, OEM stands for Original Equipment Manufacturer. This means that Microsoft draws sales from selling Windows as a product for the masses, and also, in the case of OEM, Microsoft gets revenue from Windows pre-installed devices, such as laptops and PCs. The only difference you might get as a user is that the OEM is created, installed, and dedicated to one specific device, while Commercial Windows can be installed on different devices.

On the other hand, Windows OEM Pro revenue grew 11%, driven by Windows 7 end of support and healthy Windows 10 demand, offset in part by weakness in small and medium businesses. Windows OEM non-Pro revenue grew 5%, driven by consumer demand from remote work and learning scenarios.
Now, according to StatCounter, Windows is by far the most popular OS for desktop devices with 73.54% of all devices, while in second place comes Mac OS in a distant 15.87%. 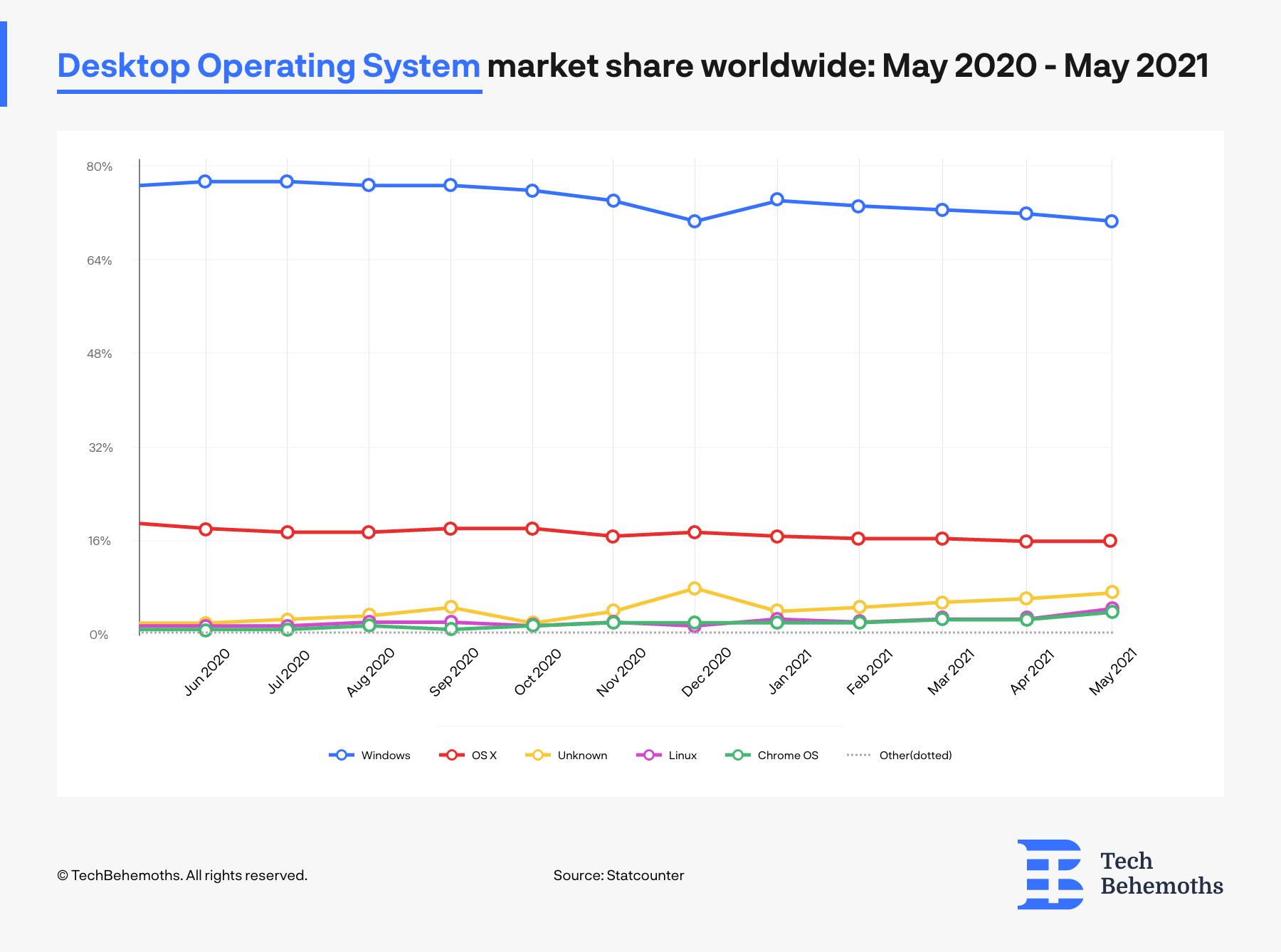 With all this, Microsoft has only 16% of its income from Windows, which relates to a replanned technology focus on other industries, but at the same time keeping the OS alive, with new updates and news. 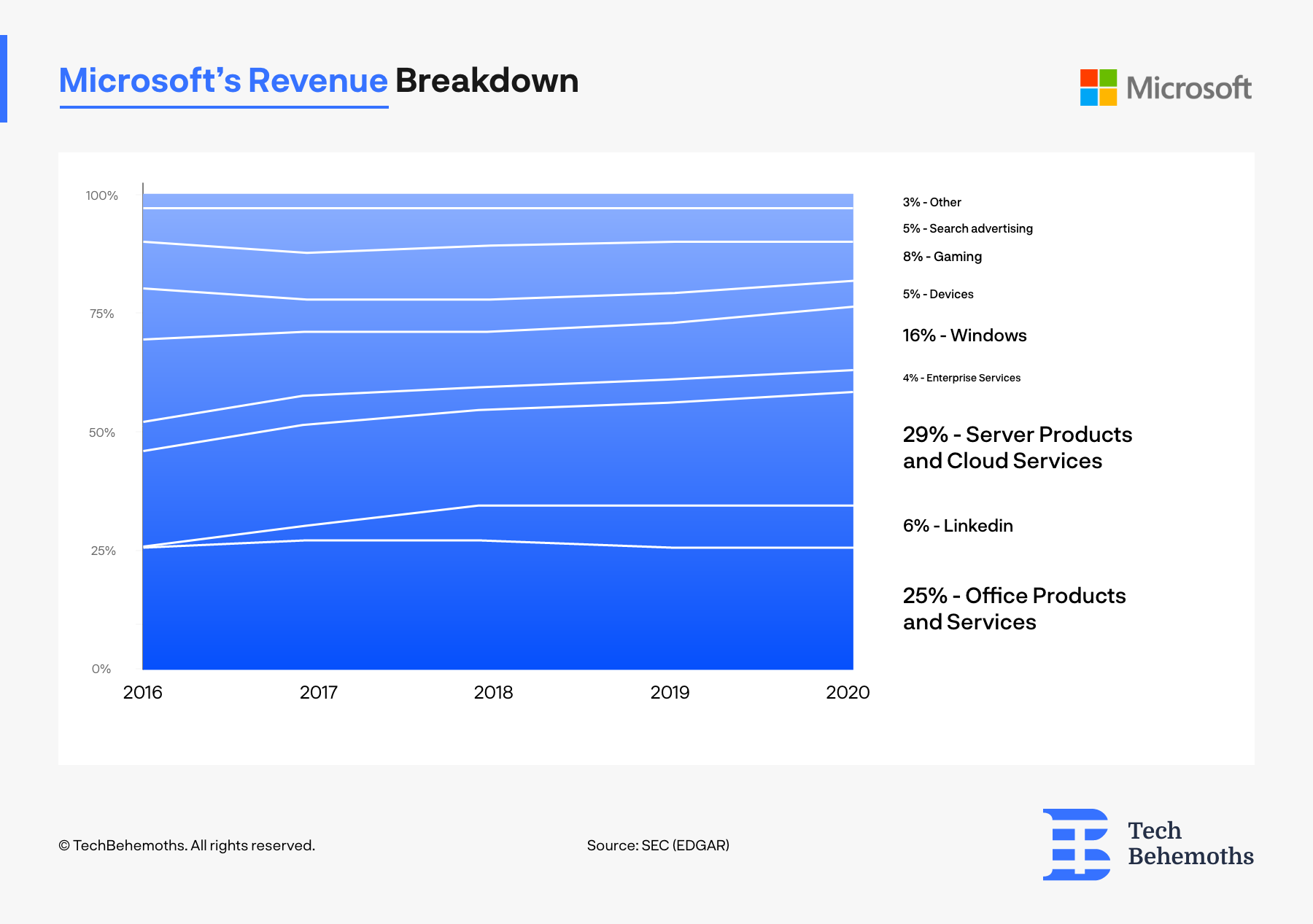 How Microsoft Makes Money from Teams

Microsoft Teams announced in November 2016 and it was a surprise to the market, which was mainly controlled by Slack. However, rumors say that Gates offered to buy Slack for $8 billion, but it was told to use Skype as a competing tool for Slack.

Instead of using Skype as the new Slack, Gates’ Microsoft created Teams, which has one large advantage on the market - it comes pre-built with the Office suite and Microsoft 365. However, the number of apps that Teams can be integrated with is lower than in the case of Slack which spent years on all kinds of optimizations for third-party applications.

But the pandemic changed things about Teams, which starting early 2020 focused on video calls, and entered Zoom’s territory and in direct competition.  Nonetheless, Teams registered a huge growth between November 2019 - April 2020: started with 20 million users, in March reached 44 million users, and by April went to 75 million users. This means that in the given timeframe, Microsoft teams grew by 320% when it comes to users. 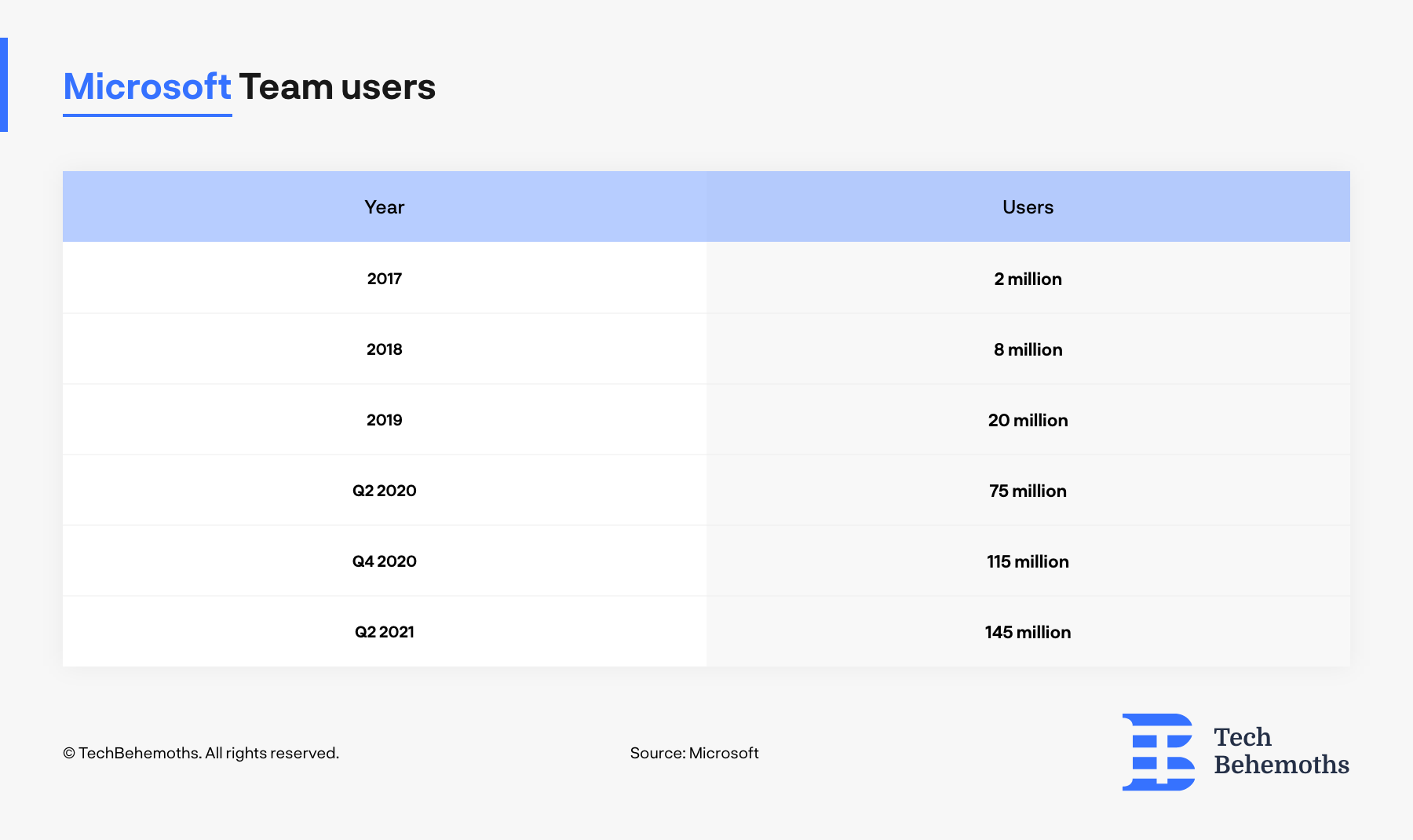 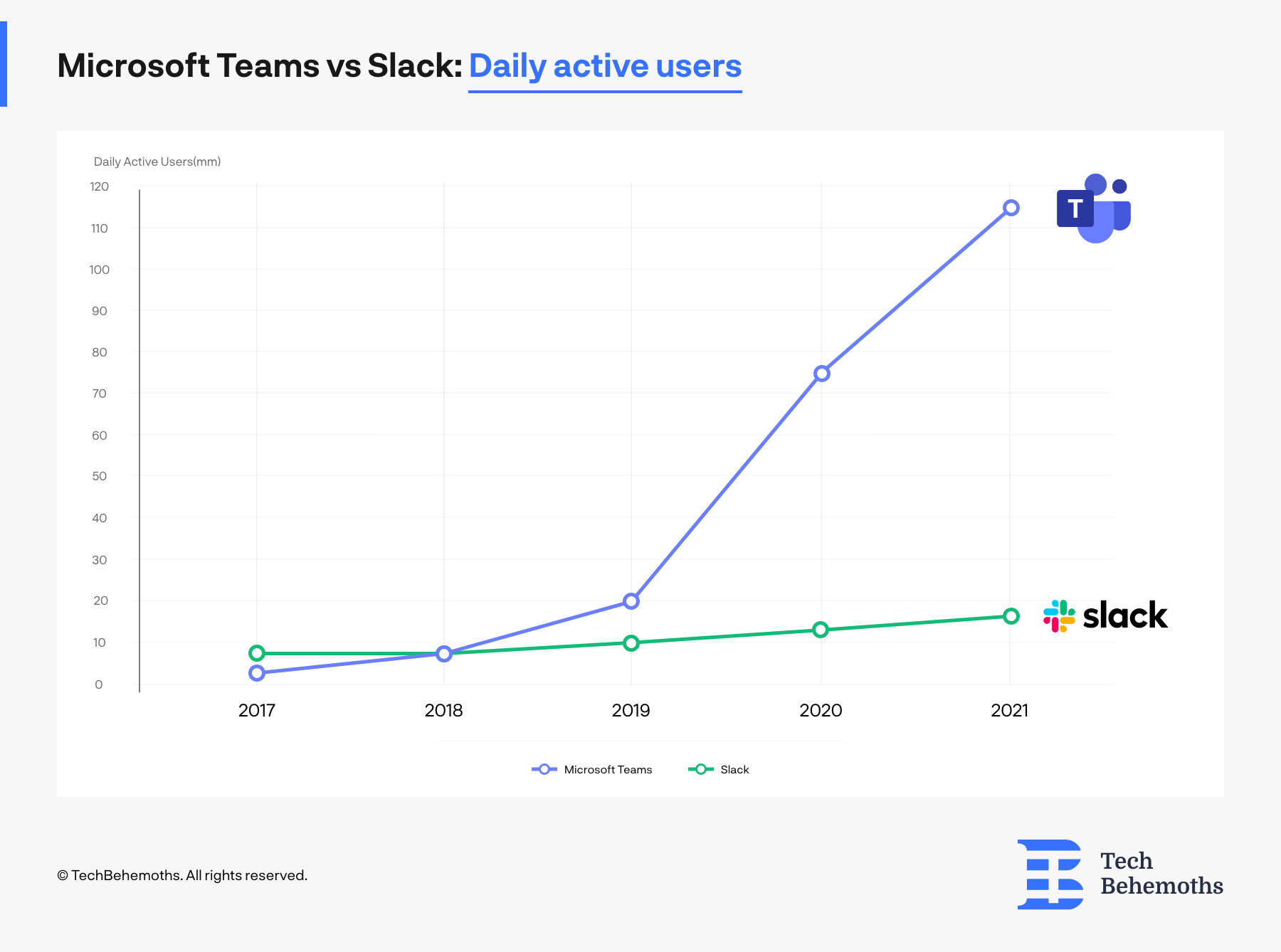 Microsoft Teams is now available in 183 countries and 44 languages with more than 183.000 educational institutions using it as a primary communication tool.

How Does Microsoft Make Money From Xbox

In November 2001 Microsoft announced and introduced the Xbox to the general public. A thing that put them in direct competition between Sony and Nintendo at that moment. Over time Xbox didn’t get enough popularity among users, but still managed to keep their third position in place with more than 49 million devices sold by January 2021.

However, these numbers are not enough for close competition with PlayStation and Nintendo, but things are going to change. 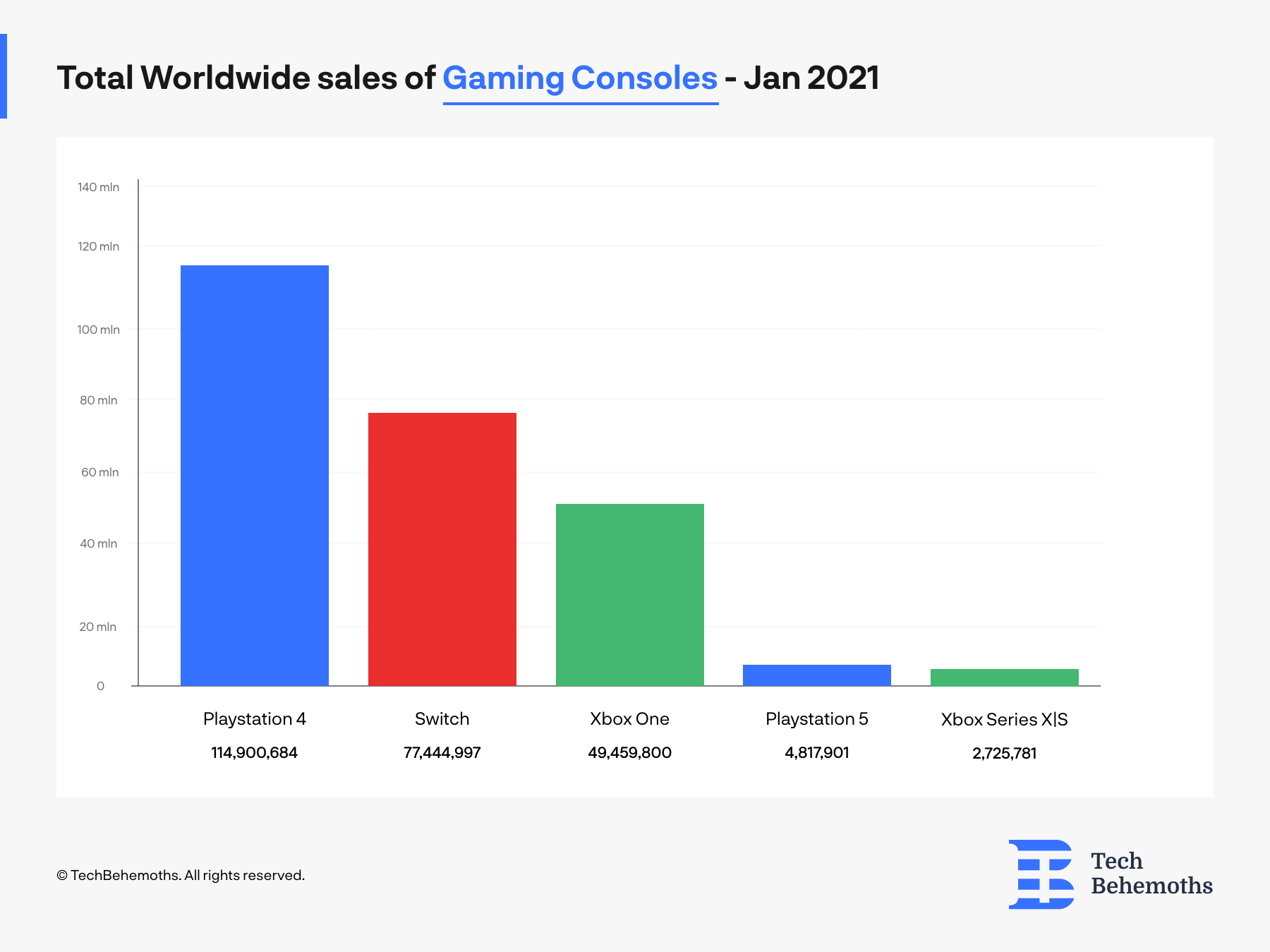 With the new technology and generations of gaming consoles, in the battle so far there are only two players, Nintendo being either kicked out or resigned by themselves focusing more on portable consoles. 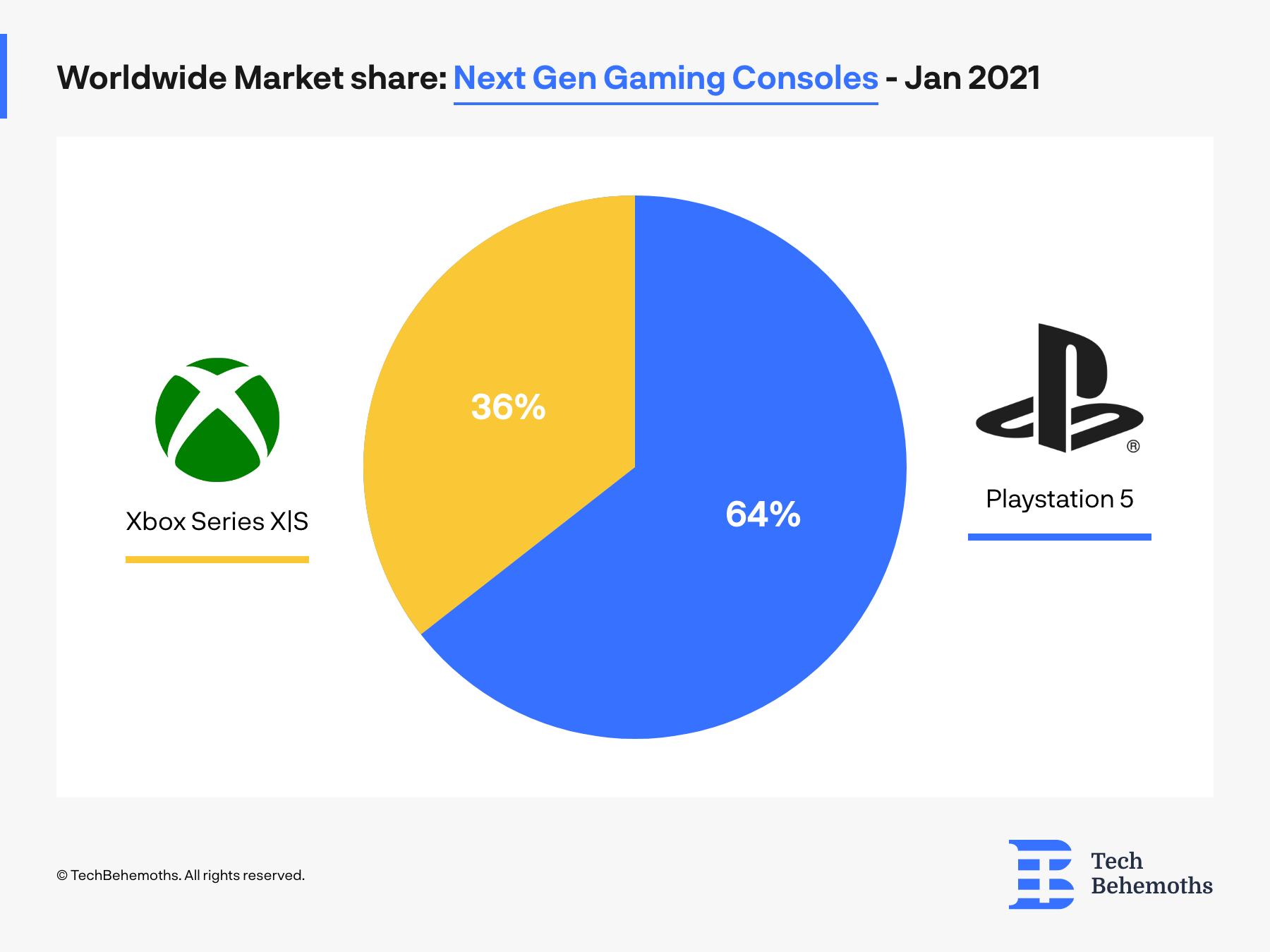 In the iconic battle of Next Generation Gaming Consoles, Microsoft’s Xbox has a larger share and provides more competitiveness to PlayStation. And all together with the cross-platform games being released, it seems that the battle will go between affordability and customer loyalty rather than innovation and comfort.

When it comes to revenue, Microsoft doesn’t state exactly how much it earns from Xbox sales, but it mentions it as a catalyst for an increase in the gaming industry revenue, along with their brand new laptop series - Microsoft Surface, and Minecraft.

This way or another, Xbox has a chance to compete right now, being the only console on the market able to face PlayStation’s trending growth.

How Does Microsoft Make Money From LinkedIn

LinkedIn is just another successful deal that made Microsoft enter a new market, and thus, in a new competition. This time, with Facebook and at that specific time with Google+. Yet, LinkedIn is a social network for professionals, and a great tool for HR professionals, and also for freelancers, job finders, and for all other types of employees.

LinkedIn was acquired in 2016 by Microsoft, and it sparked several data breach scandals before and after it was acquired. But this never stopped Microsoft from making it the one and only network of its kind on a global scale.

According to Statista, LinkedIn revenue only increased since it was acquired, a thing that speaks of investments and good management, or at least better management than it was before. 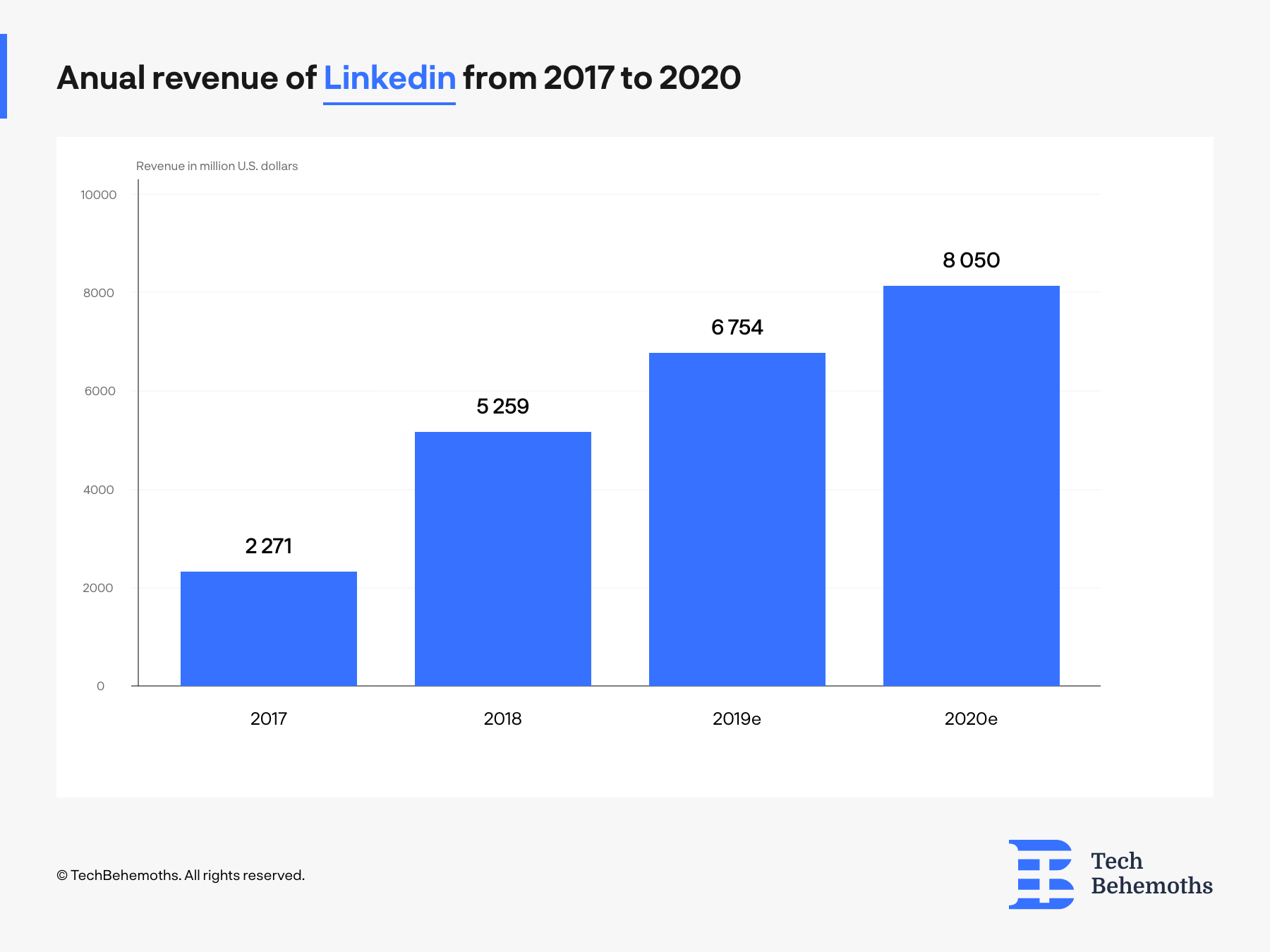 The revenue didn’t grow by itself, and there is more than one reason behind it. First of all, users - from 433 million users back in 2016 when it was acquired, up to 740 million users in 2021. The user growth brought new tools of revenue growth - LinkedIn ads, and premium accounts. So generally we can speak about the domino effect in the case of LinkedIn. 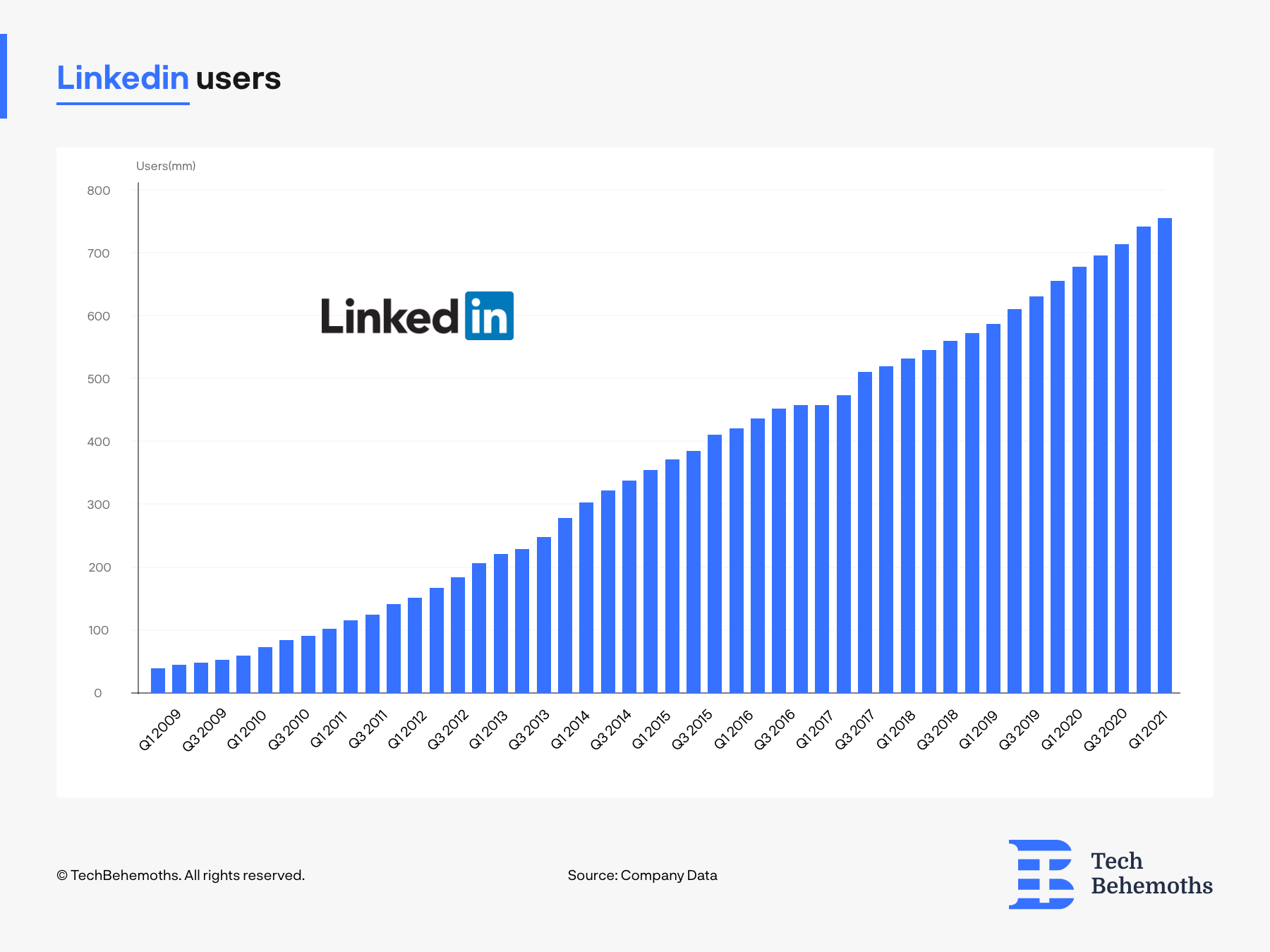 How Does Microsoft Make Money From Minecraft

In addition to Xbox, Minecraft is the second part of how Microsoft makes money in the gaming industry. In 2014 there were rumors that Microsoft will acquire Mojang for $2.5 billion. At that time, Microsoft was not even close in the league of game production, so it was obvious from the very beginning that Microsoft was actually interested in the game, more than the studio itself. So it was - under Microsoft management, Mojang continued to develop the Minecraft universe.

The Minecraft universe expanded two times for big - in 2017 TellTale launched Minecraft: Story Mode which brought the experience beyond the sandbox, and in 2020 Mojang came up with Minecraft Dungeons. The efforts were not in vain, since both revenue and the number of players grew year to year. 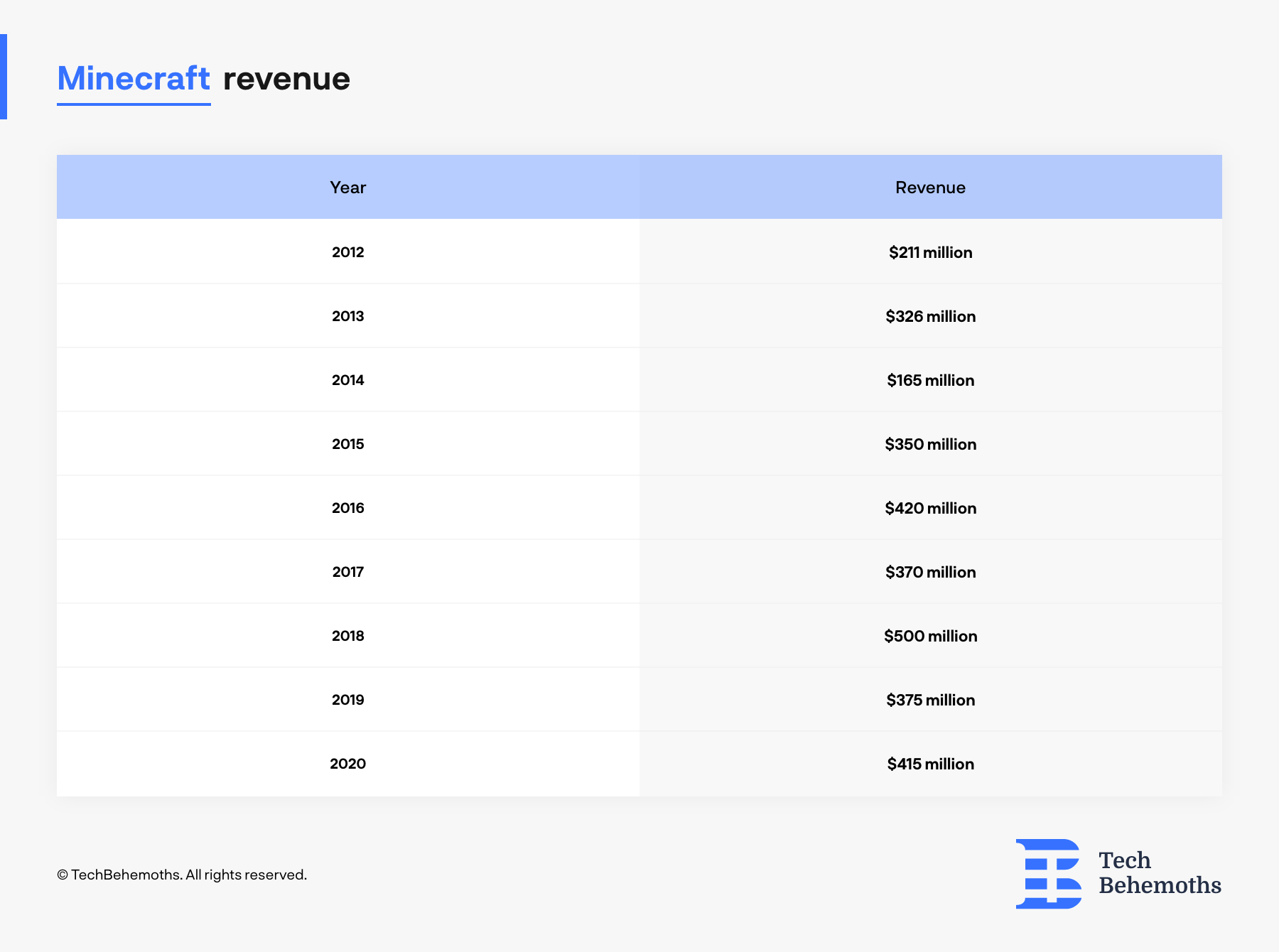 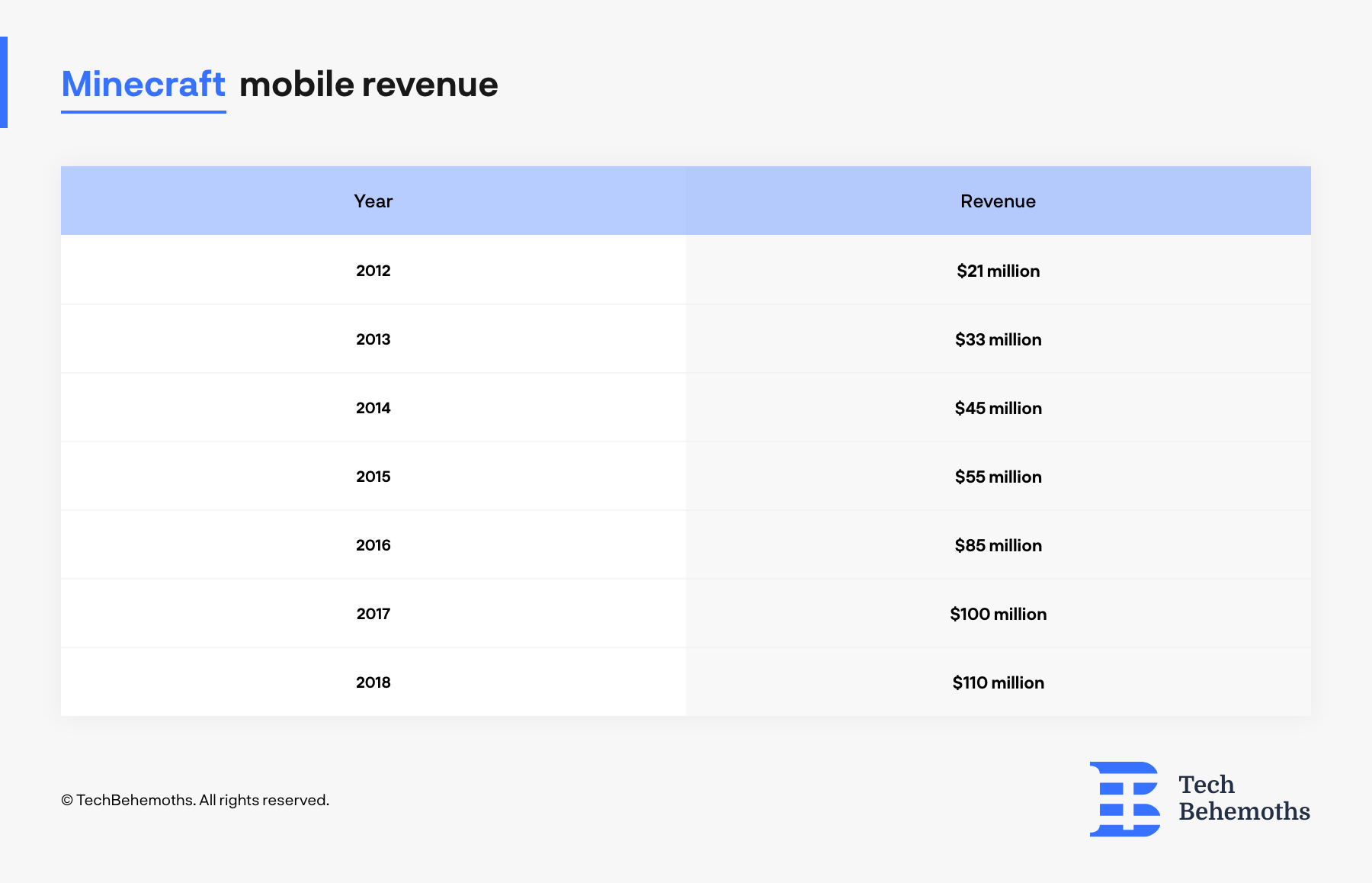 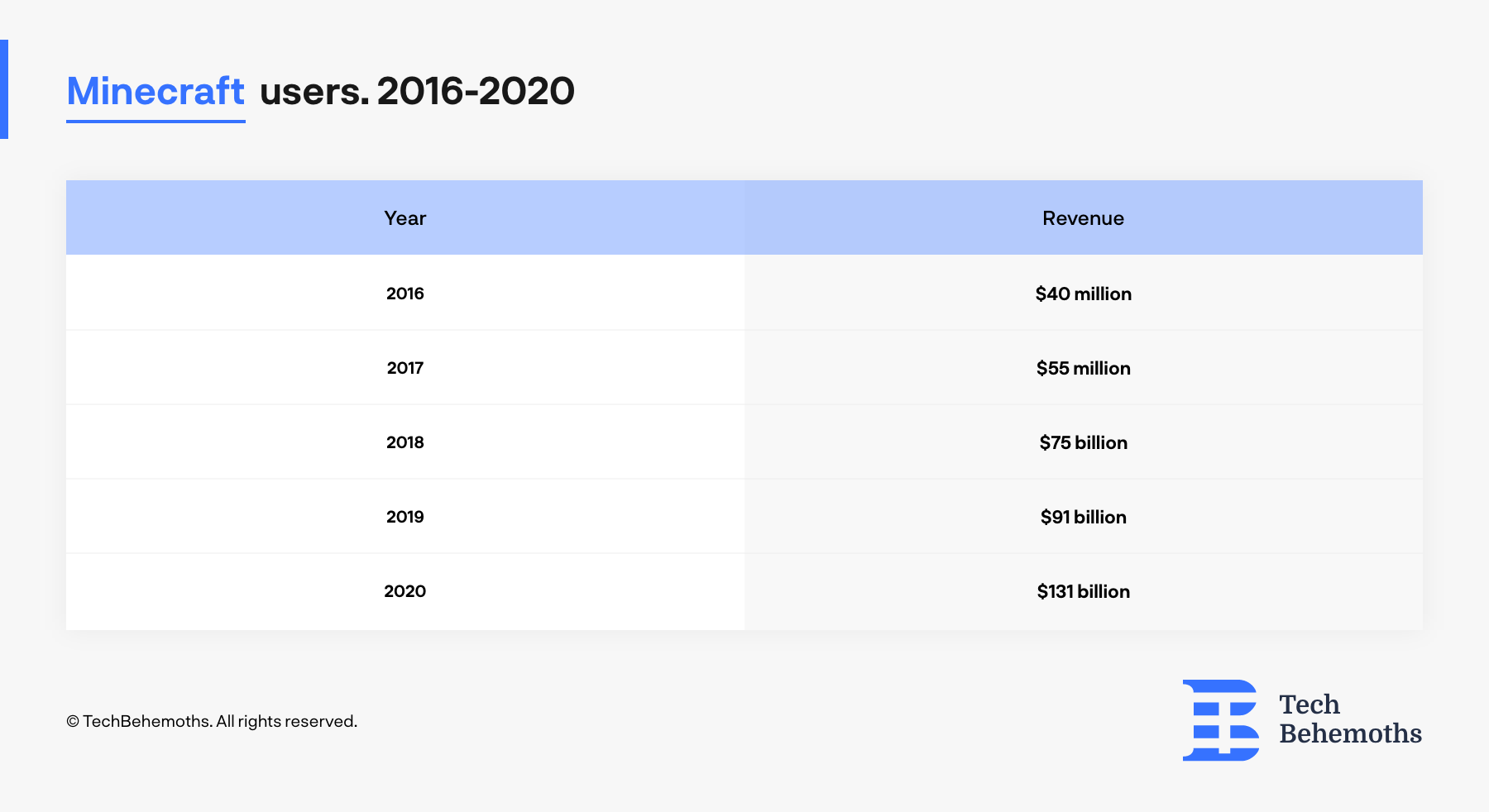 How Does Microsoft Make Money From Office Suite

The one thing that Microsoft keeps in the shadows more than others is how does the Office Suite performs. With no much official data to share, we could only suspect that Office is one of the most profitable products Microsoft has at this moment. This fact is confirmed by the latest statistics that place Microsoft Office 365 as the leading productivity software, in tight competition with Google Apps. 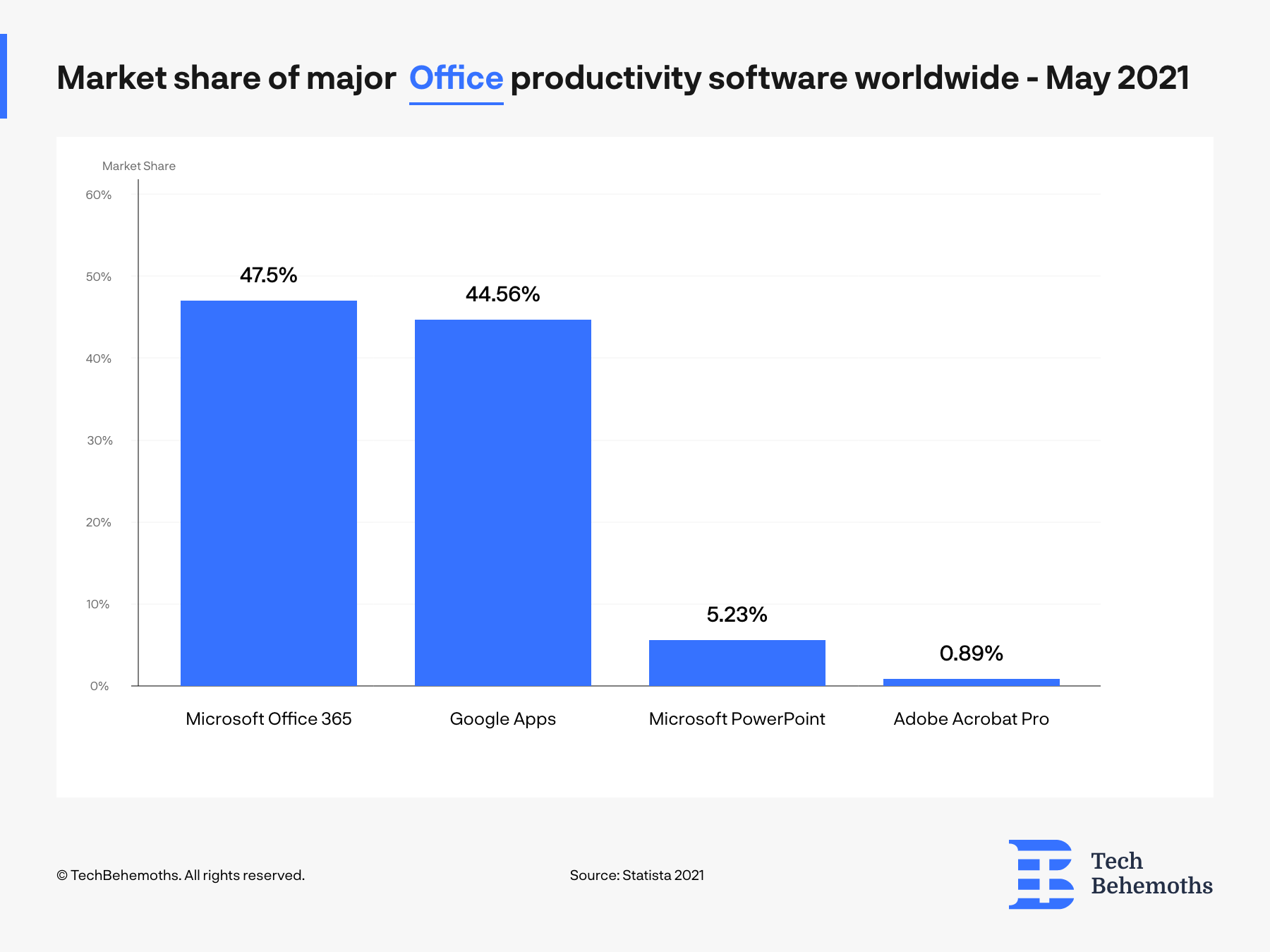 The aggressive market strategy Microsoft has for their products increases the value and usage rate, but also the revenue and number of users. Office, Azure, and Xbox are the ones to mention when it comes to aggressive market positioning.

How Microsoft will make money from Activision in 2022

Microsoft started 2022 with the largest acquisitions in the gaming industry in history. Activision Blizzard was acquired by Microsoft for $68.7 Bn in January 2022 and announces a hot year for Tech. The merge is not yet completed but the FTC is already watching closely the entire process, and there are voices that say the Activision acquisition by Microsoft may be the subject of an anticompetitive deal. Everything happens on the following financial background - Microsoft reported revenues of $15.4 Bn in 2021, while Activision Blizzard shared info of $8.7Bn revenue in the same timeframe.

Right after the deal is closed, it's expected that Activision CEO - Bobby Kotick will retire and be replaced by Chris Spencer - the head of the Game Division at Microsoft. But Bobby will take with him around $375 million, or equal to 0.53% of Activision shares that he holds. It seems that it's a double win for Bobby, as he was previously accused to know about harassment inside Activision, he now gets away with clean hands and full pockets.

On the other hand, for Microsoft, this acquisition is a long-term investment in cloud gaming and will hopefully significantly increase the company's revenue in 5 years. An Omida research shows that Cloud Gaming is expected to grow from $3.7Bn in 2021 up to $12 Bn by 2026. In this very industry, Microsoft already holds a 60% market share. The first step to this would be adding all other Activision-owned games to the Microsoft Game Pass. A collection of AAA games to it would attract even more users, that by the way reached 25 million in 2021 after a 39% growth from 2020. Microsoft assures that Activison acquisition will bring fair prices for gamers and games, and will lower the price range.

How Much Money Does Microsoft have

According to NASDAQ, Microsoft's market cap is at $1.99T, and a declared revenue in 2021 is equal to $168Bn.  Based on this data, but also considering expenses, revenue and profit, GoBanking Rates estimates that Microsoft values ~$456Bn. Taking into account Microsoft acquisitions in the pas years, and as well its product development focus, there might be a change in its marketcap, value and price/share. However, it all depends on how the company will manage the existing products, and the way it will develop further. 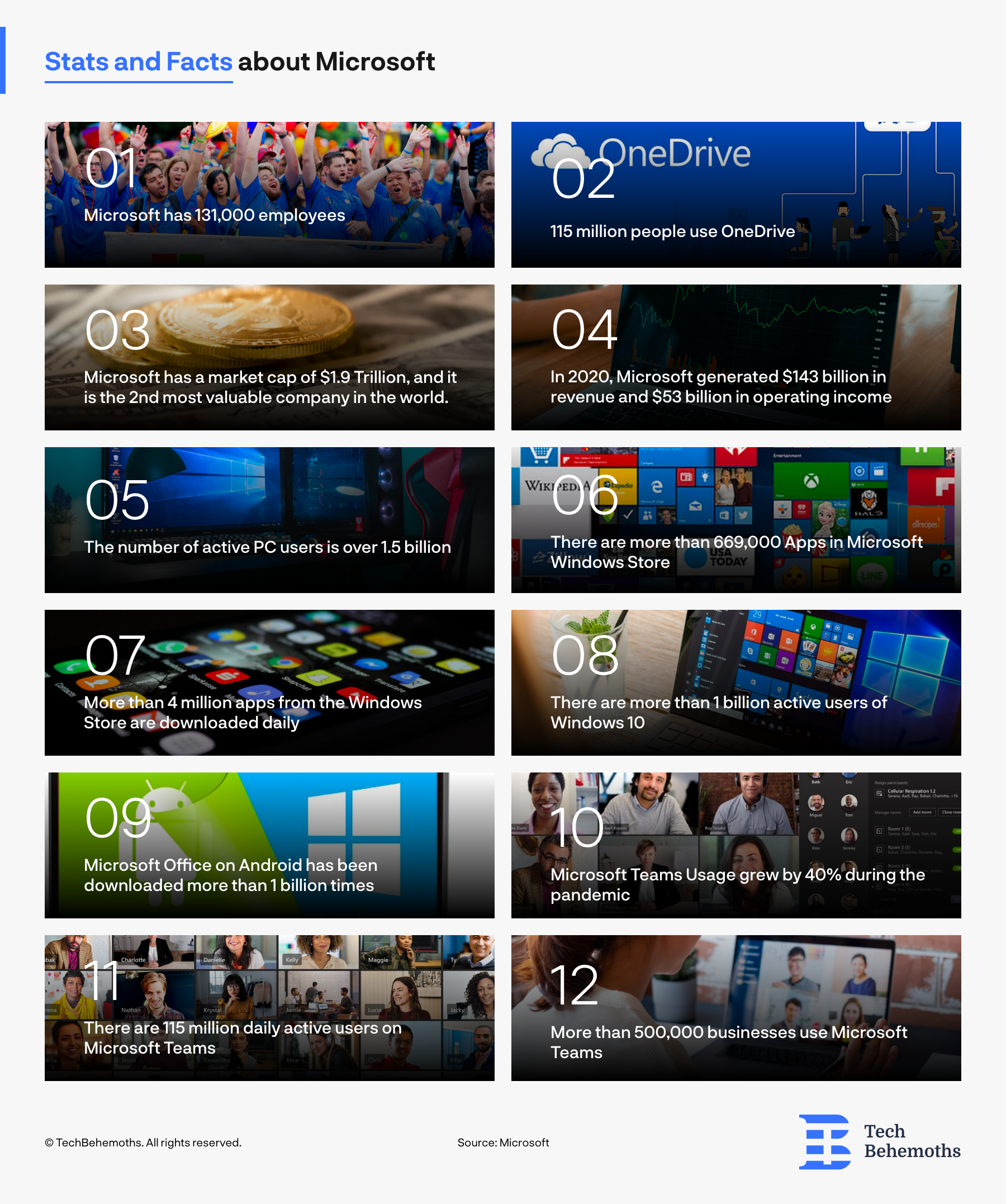 Will Microsoft earn more next year?