How does Google make money? Analyzing Google's Lines Of Business 2022

In Q1 2021 Google registered $55.31bn in revenue which is 34.1% more compared to Q1 2020. The revenue comes from multiple products and services Google provides which are a part of a well-consolidated ecosystem. Out of the main income sources, Google Search and related services have the highest share - $31.88bn or 57.64%.

On distant secondary positions there are YouTube ads, and Google Cloud among other batches of services that have revenue shares between 10-12%. Here is pretty much the full income/revenue picture: 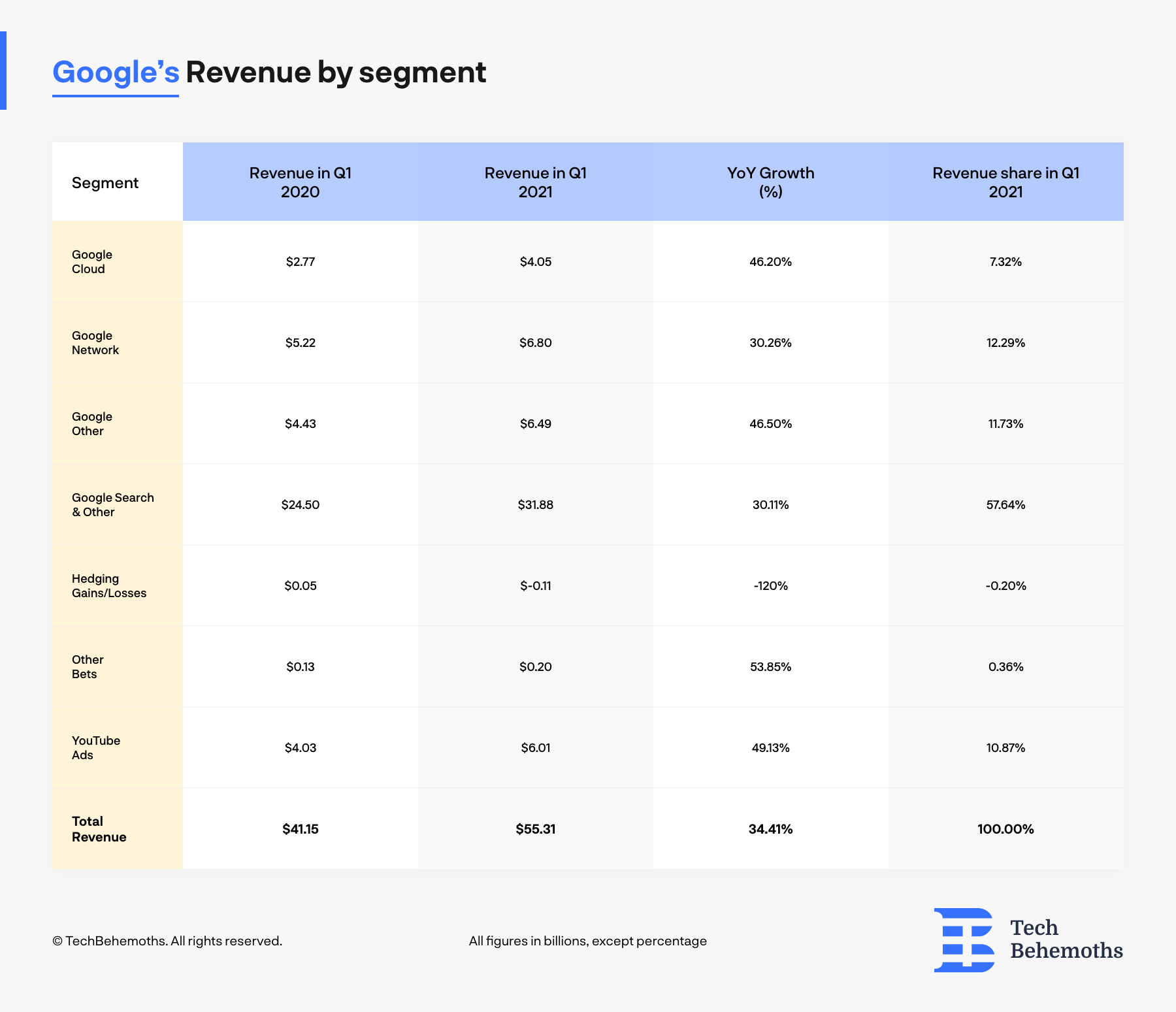 Google Cloud includes the Google Cloud Platform, Google Workspace (previously known as G Suite) and all related productivity tools has known one of the largest growth rates among all Google income sources $4.05bn in Q1 2021 compared to the same period in 2020 when it generated revenues estimated at $2.77bn.

Taking a better look at the year-over-year growth, the Google Cloud Services ecosystem registered 46.2% more in 2021 compared to 2020. Yet in 2018 the declared revenue was $1.83bn which means that it wasn’t a big success from the very beginning and users moved slowly to Google Cloud Services. 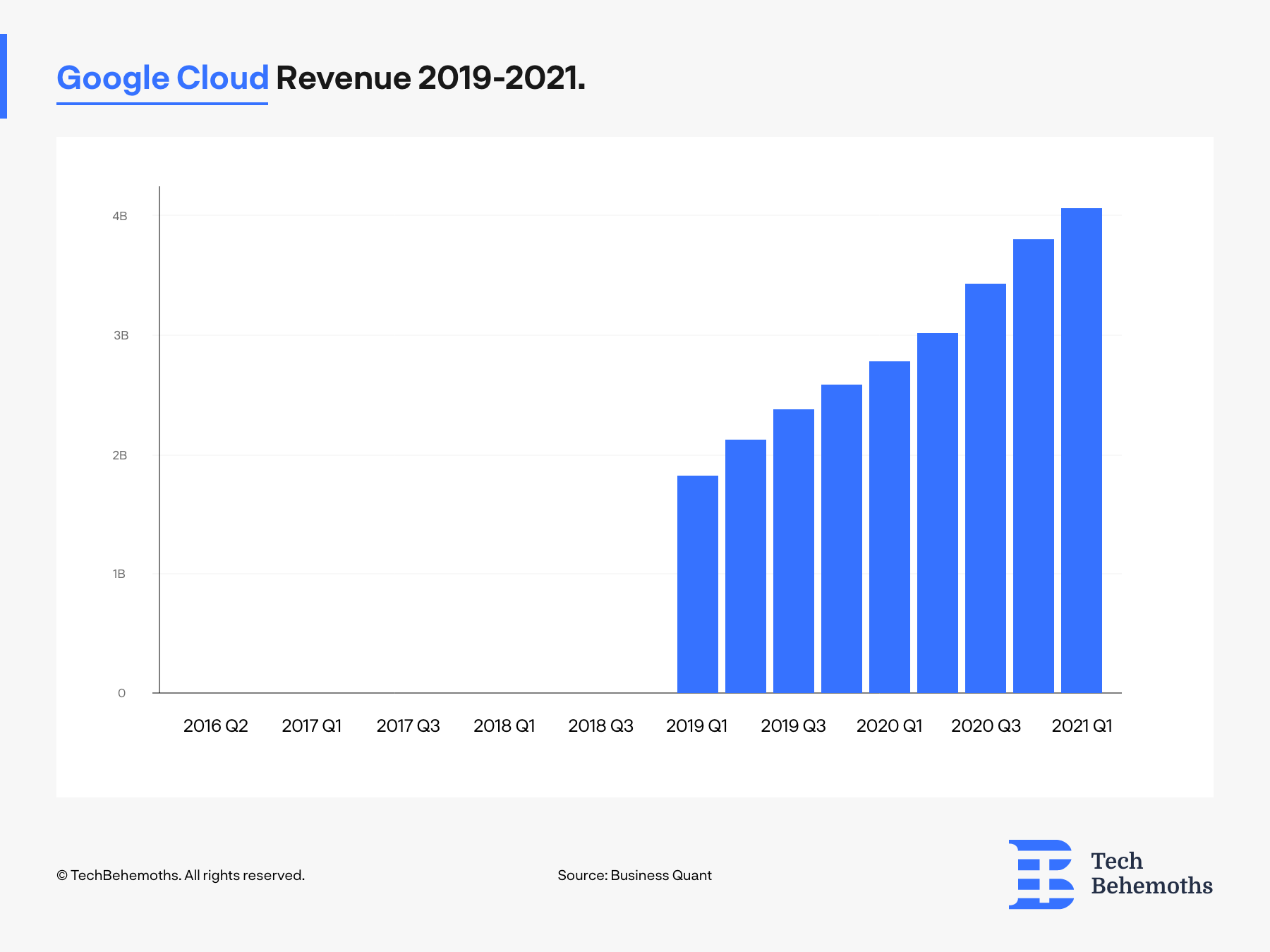 But Google Cloud Services are only a small part of revenue sources Google has. It has adopted the pay-as-you-go pricing system where users only pay for the services they consume. Probably this is one of the reasons Google Cloud is still a valuable player on the market with competitors such as AWS, Microsoft Azure, or Alibaba Cloud. 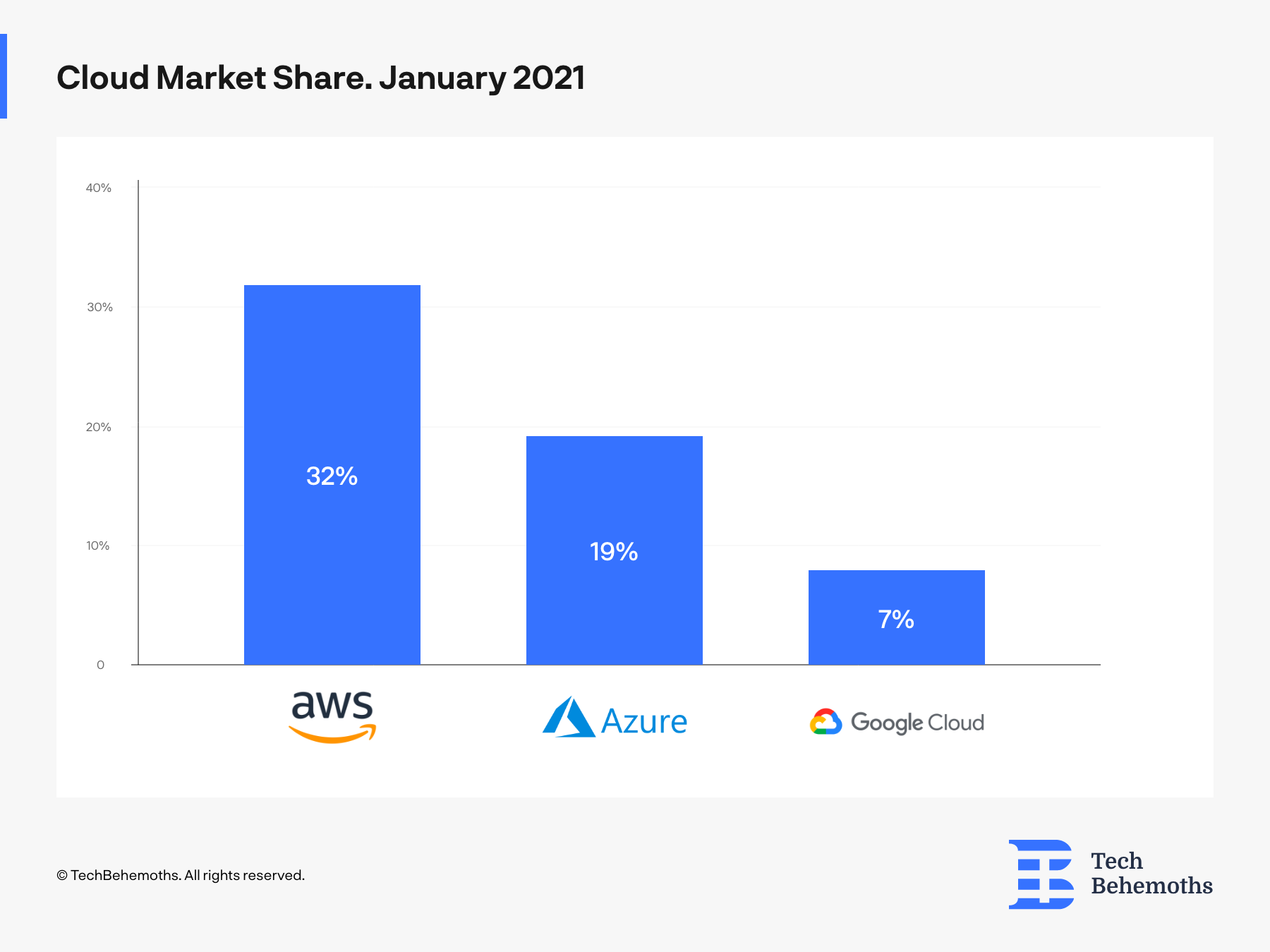 Despite being the largest app marketplace and with a nearly infinite number of other free platforms that host and provide applications, Google Play is still in second place when it comes to market revenue. But, during the pandemic, Google Play has experienced a substantial revenue growth - 25% more in 2020 compared to 2019. Speaking in numbers, Google Play had a $29.3 bn in 2019 and in 2020 reached $38.6 bn revenue. However, when looking back at 2016, when Google Play revenue was only $15 bn, the numbers doubled within the last 5 years. 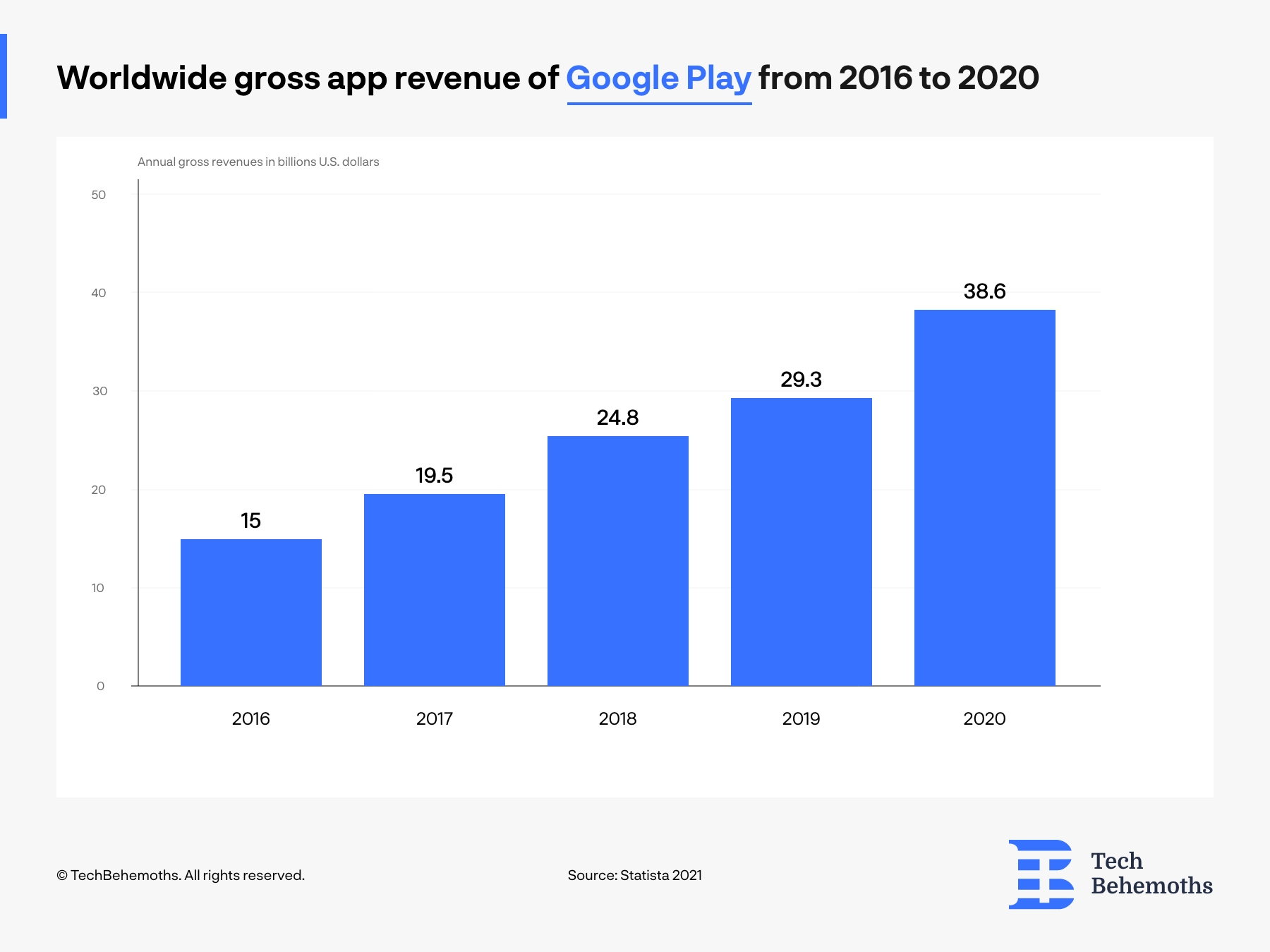 Also, data from 2020 revealed that users tend to spend 2 times less money on Google Play apps compared to App Store. However, android apps and games can be found for free in many more resources, and even if the piracy rates dropped down in the past years, Google still has lower revenue than it could actually reach. On the other hand, Microsoft’s Windows 11 promises to deliver android apps on PC by the end of 2021, which means that this could stimulate in the long run user acquisition on Google Play. 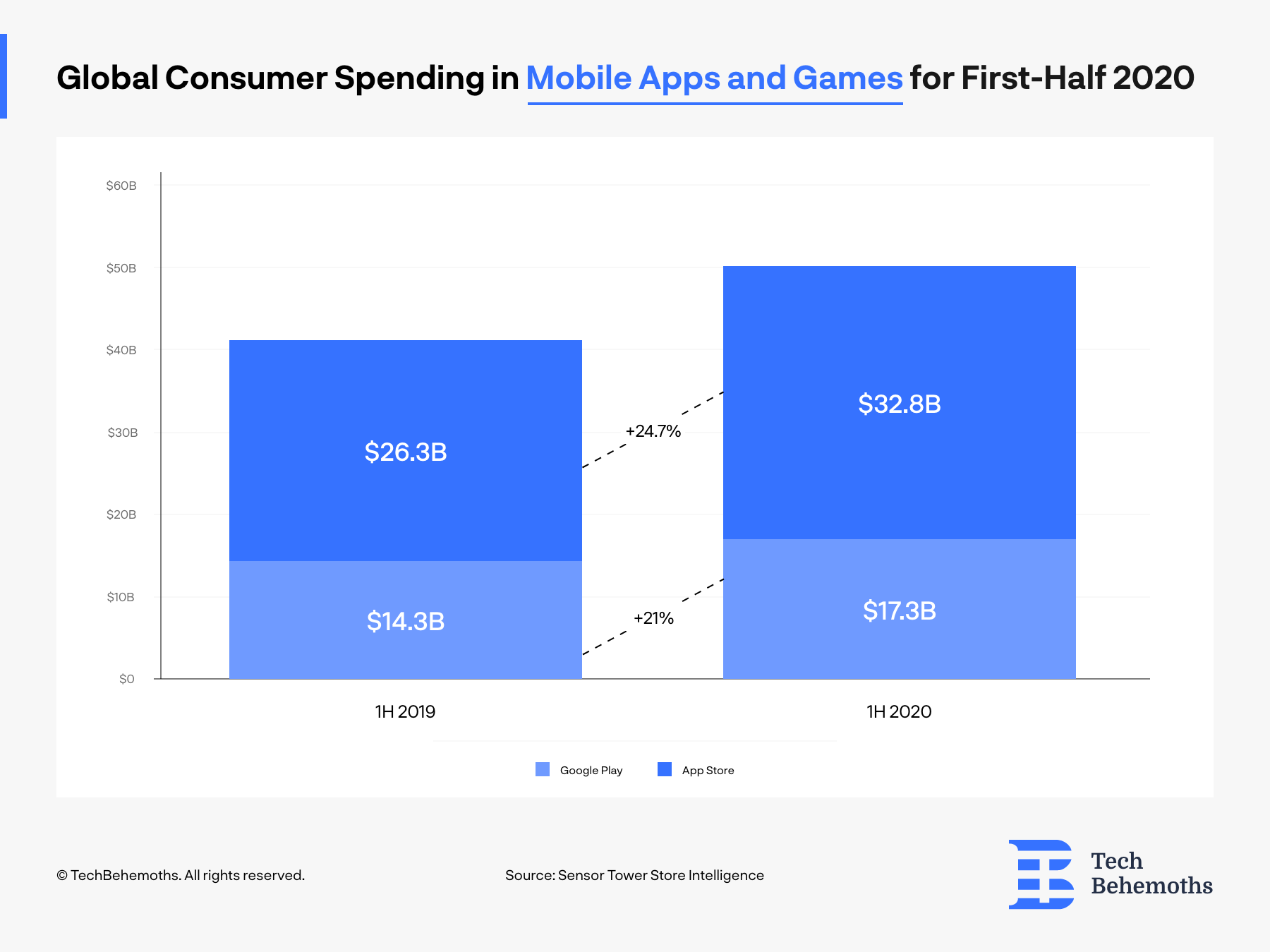 How Does Google Maps Make Money For Google

Google earns the majority of its revenue through advertising on the company's various websites. Google's Ads program allows businesses to place ads on Google's websites, including its search engine, map, video, and email platforms. In turn, Google charges those companies to advertise while the companies get the benefit of brand exposure to the millions of people that use Google products

For example, a search for a map of Boston on Google.com would yield, among other things, a detailed map of the city via Google Maps. The Maps program allows users to zoom in and out and move the map to search neighboring areas. Along the right side of the search, results screen are a number of small advertisements for Boston-based businesses, hotels, restaurants, and links to other sites selling hard-copy maps of the city. This type of paid advertising is the primary way in which Google earns its revenue.

So generally speaking Google maps is just a part of the entire Google Ads system when it comes to revenue and earnings. It is important to add that Google ads represent 70% of the overall revenue, and maps are definitely playing an important role.

Google Pay has a different business model compared to other Google products and services, but initially, that was the plan. When this functionality was designed in the first place, Google Pay was named Taz, and later on, was renamed into what we already know.

Unlike other Google services, Google Pay is an online payment app or UPI payment app. It was launched in August 2017 and is available in countries such as the US, UK, Ukraine, India, Russia, Australia, Canada, Japan, or Singapore. 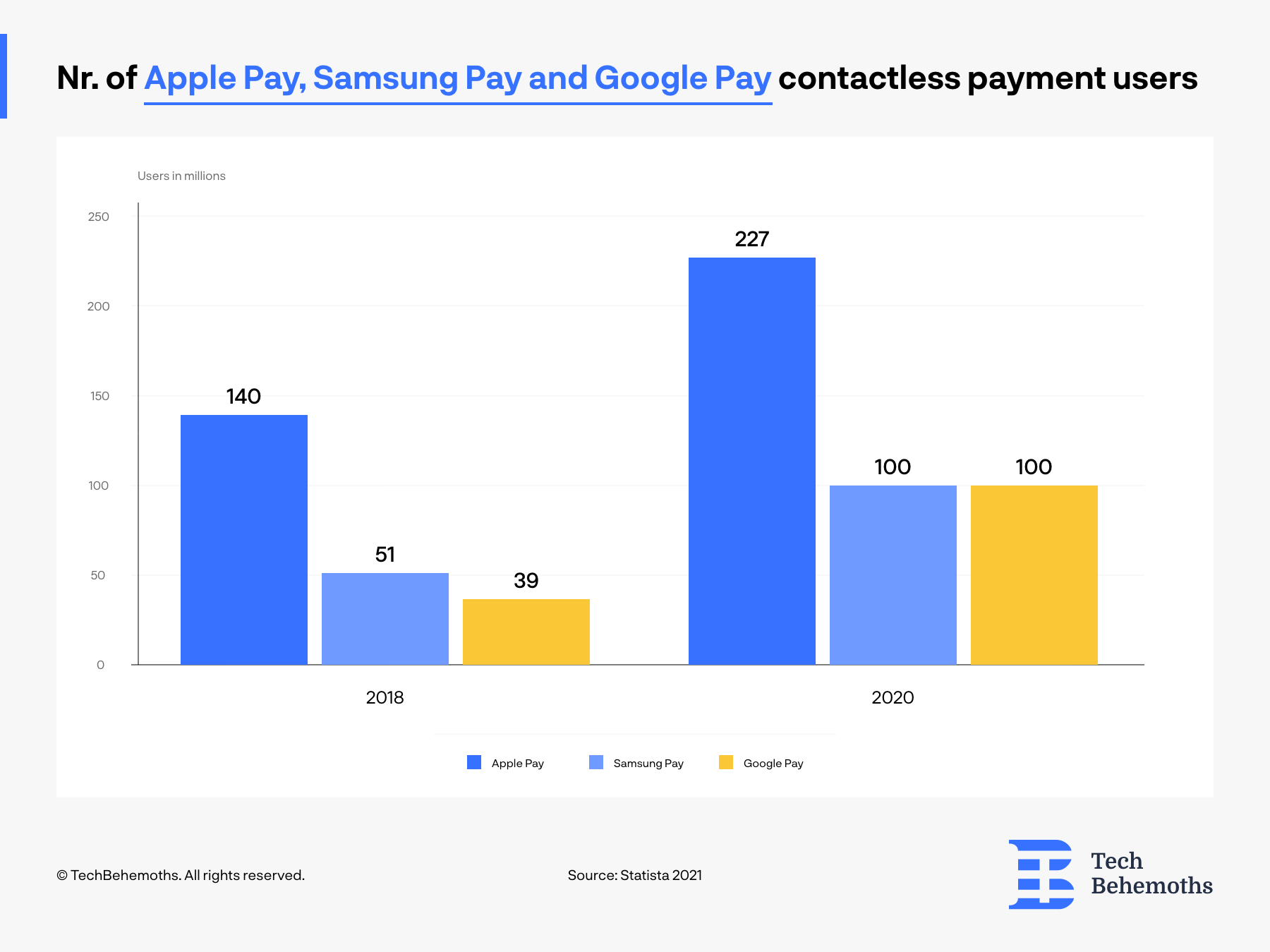 Back in 2018 Google, Apple and Samsung were in tight competition with their payment systems, but already at that time estimations showed that by 2020 Google Pay and Samsung Pay should have the same 100M users compared to Apple Pay that would reach 227M.

Among the factors that impact the numbers of users for each payment system, there is the number of users/platform or providers, and, geographical distribution. This is exactly where Google failed to implement and expand its territories and was probably left behind.

Nonetheless, the app has already made more than 2.5 billion transactions, which had a total value of $110bn+ for the entire period. The app is now connected to more than 350.000 stores in 4200 different locations across the globe.

There are three ways how Google Pay brings earnings to Google:

Advertisements on Youtube are placed through Google Adsense and Google Ad Manager. On average, Youtube receives $18 per 1000 ad views. Google has built a world-class platform for advertisers which aims to ensure a great user experience by showing the right ads at the right time. Revenue from Youtube Ads saw the second-highest growth of 49.13% YoY. In Q1 2021, Youtube Ads generated revenue of $6.01 billion and contributed 10.87% to the total revenue. In the past three years, Youtube Ads have generated more than $34 billion in revenues alone. 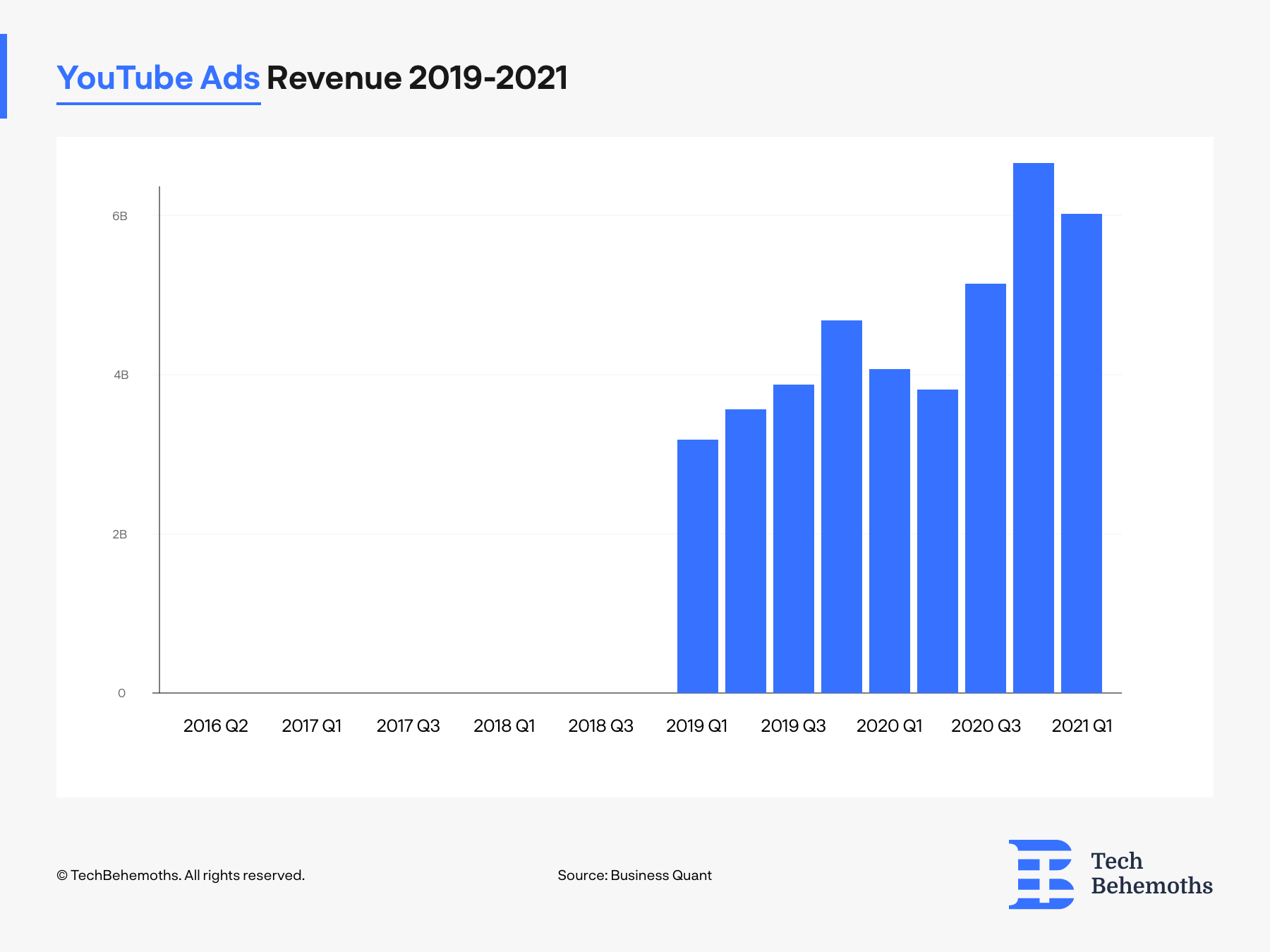 But there is one place where youtube doesn’t do so well as expected - live streaming. The live streaming segment is popular among bloggers and gamers that have already found other ways to monetize their content, including on other platforms. Twitch for example is the leading platform within the segment, and is keeping its distance. One of the biggest advantages Twitch has to offer for streamers is better monetization options compared to Youtube. 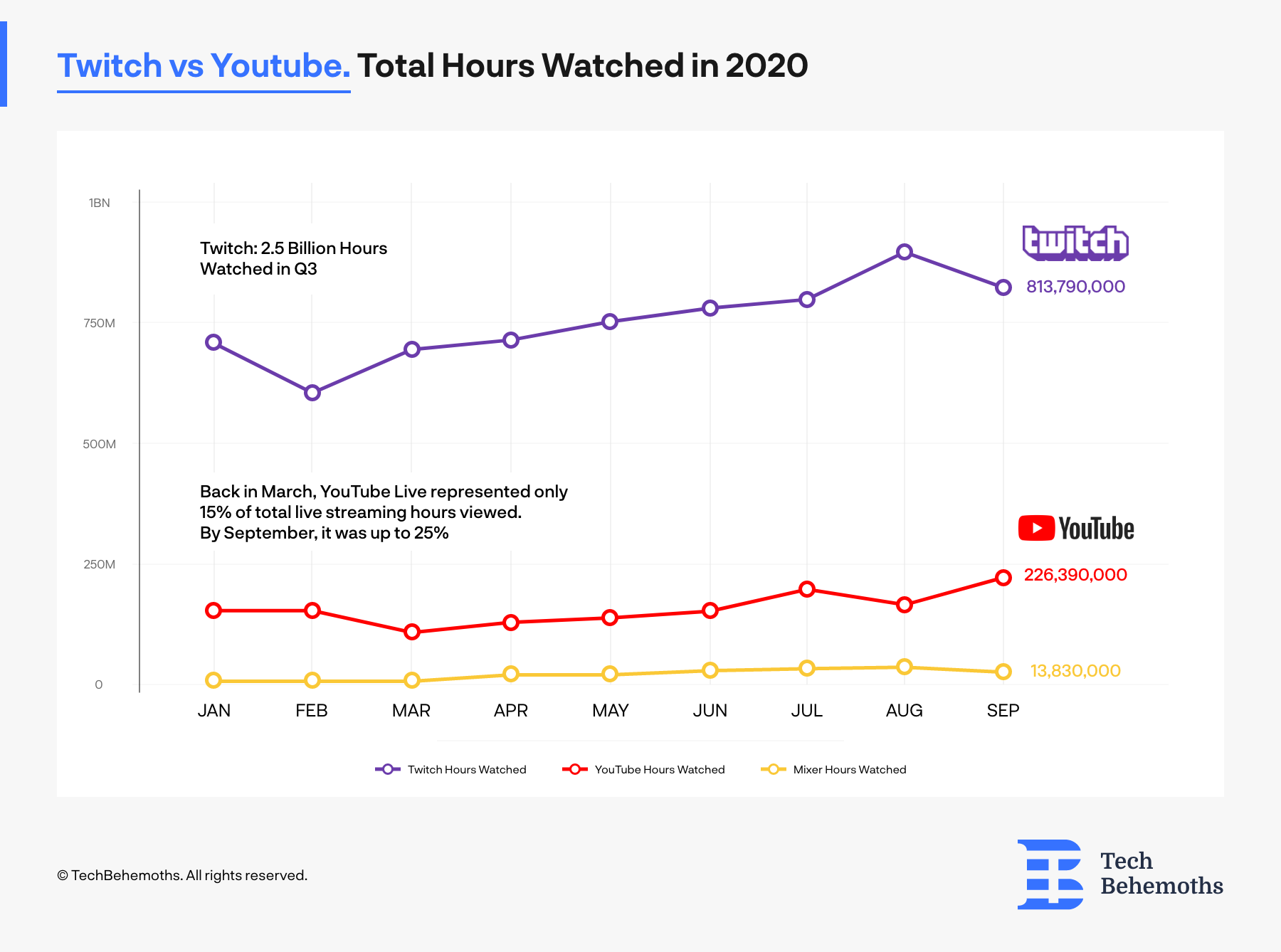 The recent growth YouTube has registered for active users on the platform during streaming programs has slightly increased but is still far away from Twitch. On the rise is Mixer, who also can be an attractive alternative in the long run, but it’s too far away on total hours watched, even from YouTube

How Does Google Make Money From Google Search

Google is the most widely used search engine in the world and has a market share of 92% in the Search engine segment. Google search contributed 57.64% to the total revenue in Q1 2021. Google Search revenues increased from $24.50 billion in Q1 2020 to $31.88 billion in Q1 2020 and witnessed a growth of 30.11% YoY. Google’s competitor in this segment includes- Bing, Yahoo, Yandex, Baidu, and others. However, the presence of Google in some countries is conditioned by multiple factors, which reveals political and economical challenges the company faces in multiple areas and fields.

Generally, the competition and market share have included geographical control and distribution with small exceptions: 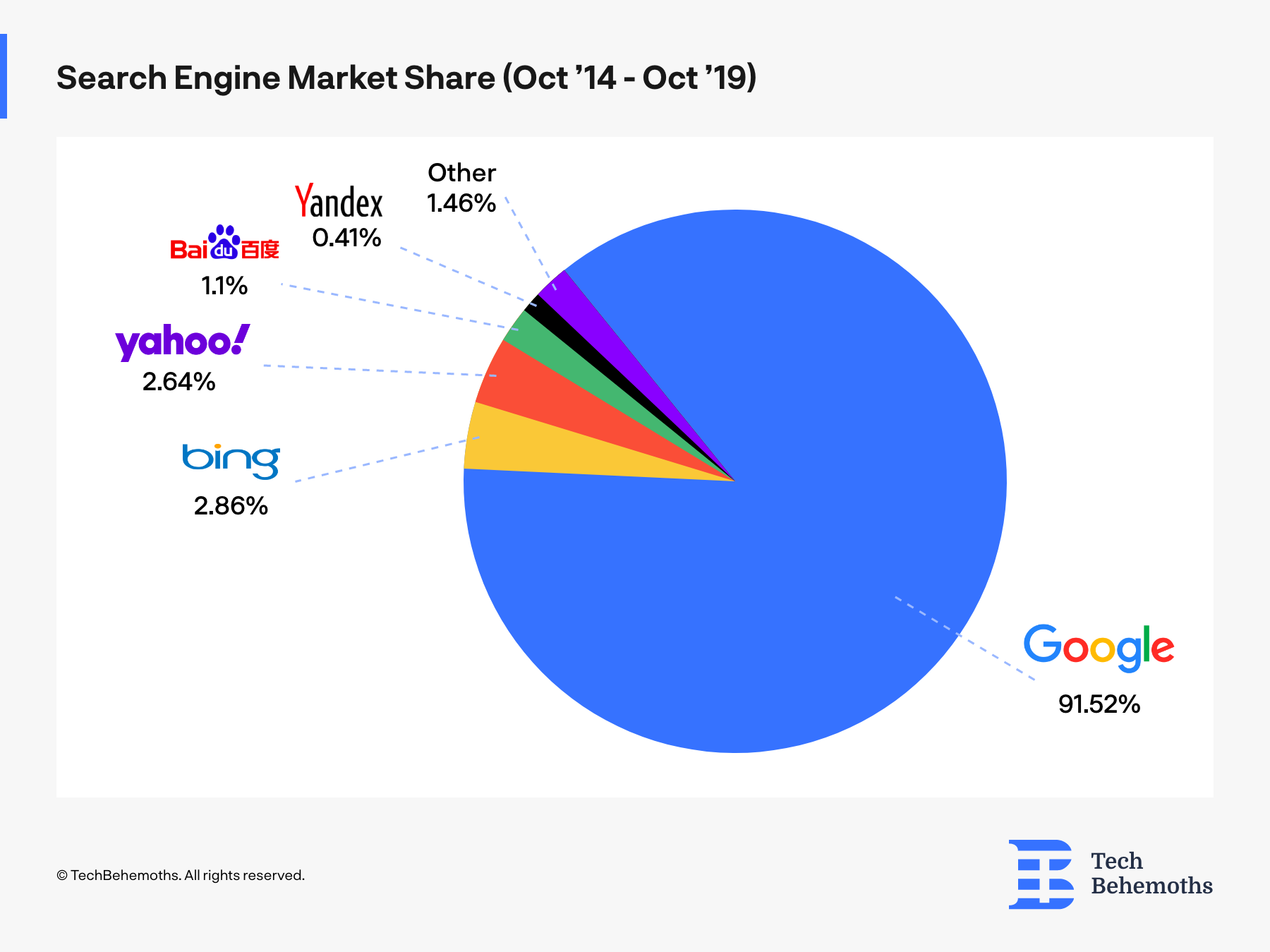 How Much Money Does Google Make Per Year

According to companiesmarketcap.com, the company that owns Goggle - Alphabet registered earnings in 2022 of $88.73B as of June 2022. Compared to 2021 earnings, when the sum was equal to more than $91B, it is estimated that Google will earn two times more in 2022. In a quick overview in the past 20 years, Google passed the $1B earnings/year first time in 2004. At the same time, between 2020-2022 Google has doubled its earnings according to its year-by-year reports.

STATS AND FACTS ABOUT GOOGLE

Do you think Google should earn less?