The tech employment rate in the United States in 2020 has dropped by 33.2K as a direct consequence of the pandemic. This came after an increase of over 90,000 job places in 2019, which is the 3rd highest growth since 2015 according to CompTIA job report.

Not that the tech industry was the most affected by the pandemic in the previous years or even now,  specific tech businesses in several states and cities in the US decided to cut their expenses since the situation remains unpredictable with the new strains at 1.5 years of the covid-19 pandemic debut in the US. 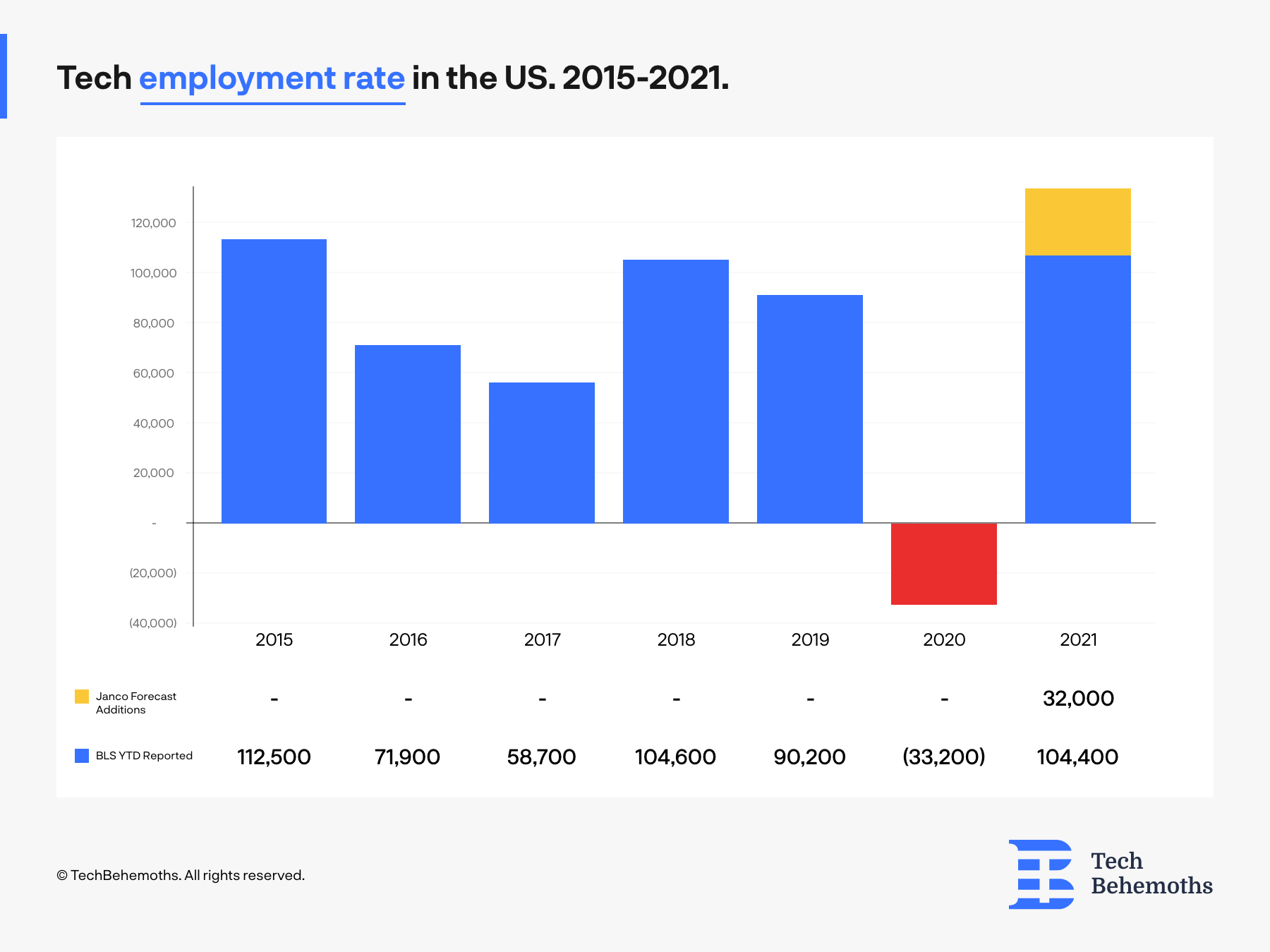 Janco Associates Inc estimates that there will be additional 32K workplaces in IT in 2021, above those 104K that have already been registered by August 2021. If Janco is right then 2021 will be the year with the highest number of new IT jobs created in the last 6 years

Tech Employment Rate in the US in 2020

2020 started in full force when it comes to tech employment and up to the third month, nothing predicted a workplace drop compared to the previous year. Even if by November 2019 everybody was aware of the novel coronavirus, for the western countries, including the US, everything seemed to be a distant and unrealistic scenario.
As of March 2020, when the virus spread across the world, US IT companies were alarmed by the number of cases, which started to hit the industry directly by significantly decreasing the number of new job posts in the IT sector. 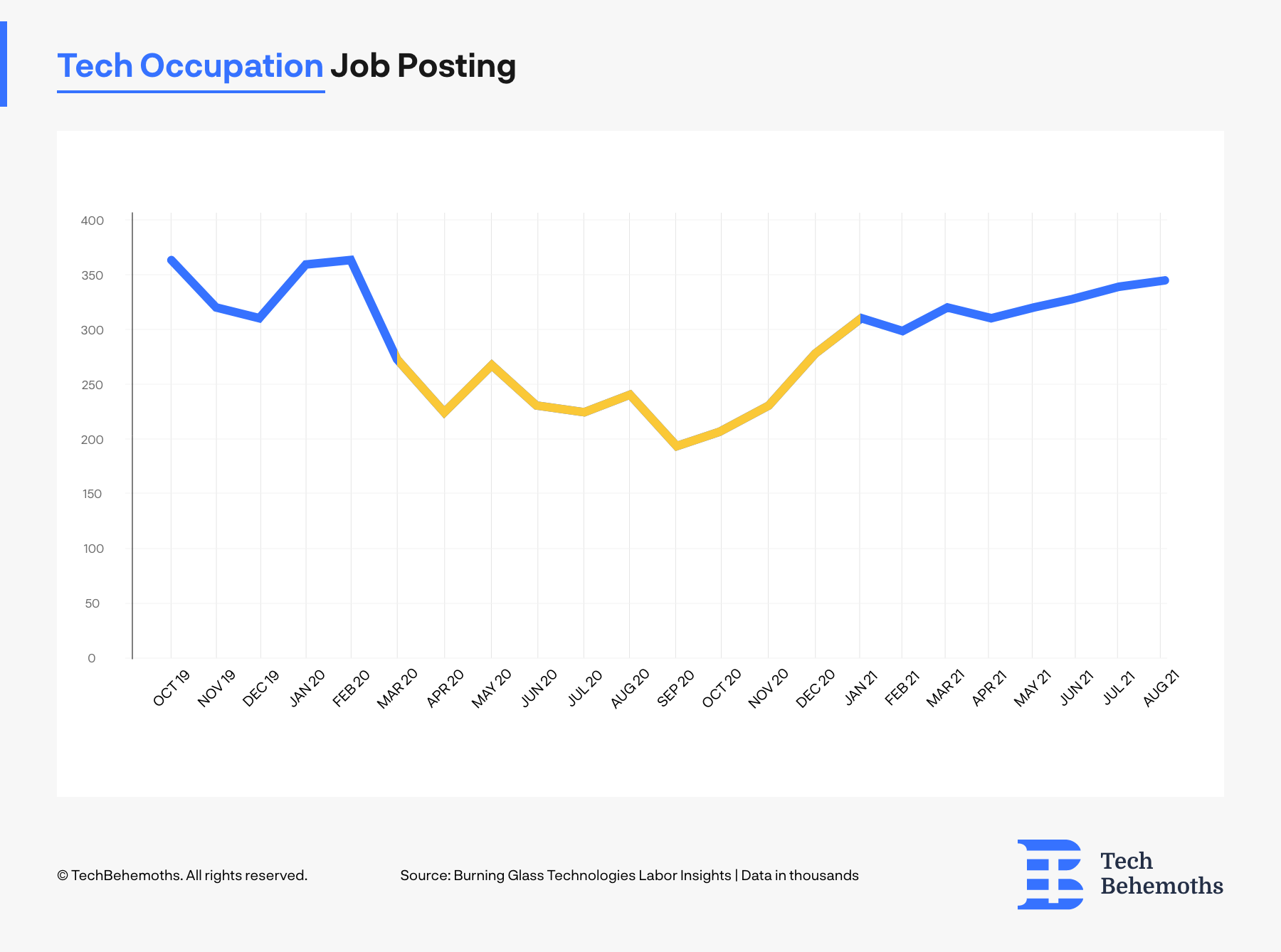 In addition to the continuously decreasing number of job posts, companies gave a clear signal that the unpredictable situation may affect their revenue for the next period. The tech sector employment rate also decreased suddenly in March 2020, from over 4.7M in February to little more than 4.6M jobs in the next month. Coming back to the initial thought, it is possible that this was a purely economical decision that companies took, but it was also enhanced by lockdown regions,  employee refusal of going to offices, and remote work adaptations.

Generally, in the history of tech, March 2020 can be considered the beginning of a new era for all companies in the industry. Remote work was the biggest change and challenge that tech companies faced and managed to deal with it, making multiple important players in the sector (e.g Facebook, Google, Twitter, Uber, Apple) accept and implement this model for the profit of both companies and employees. 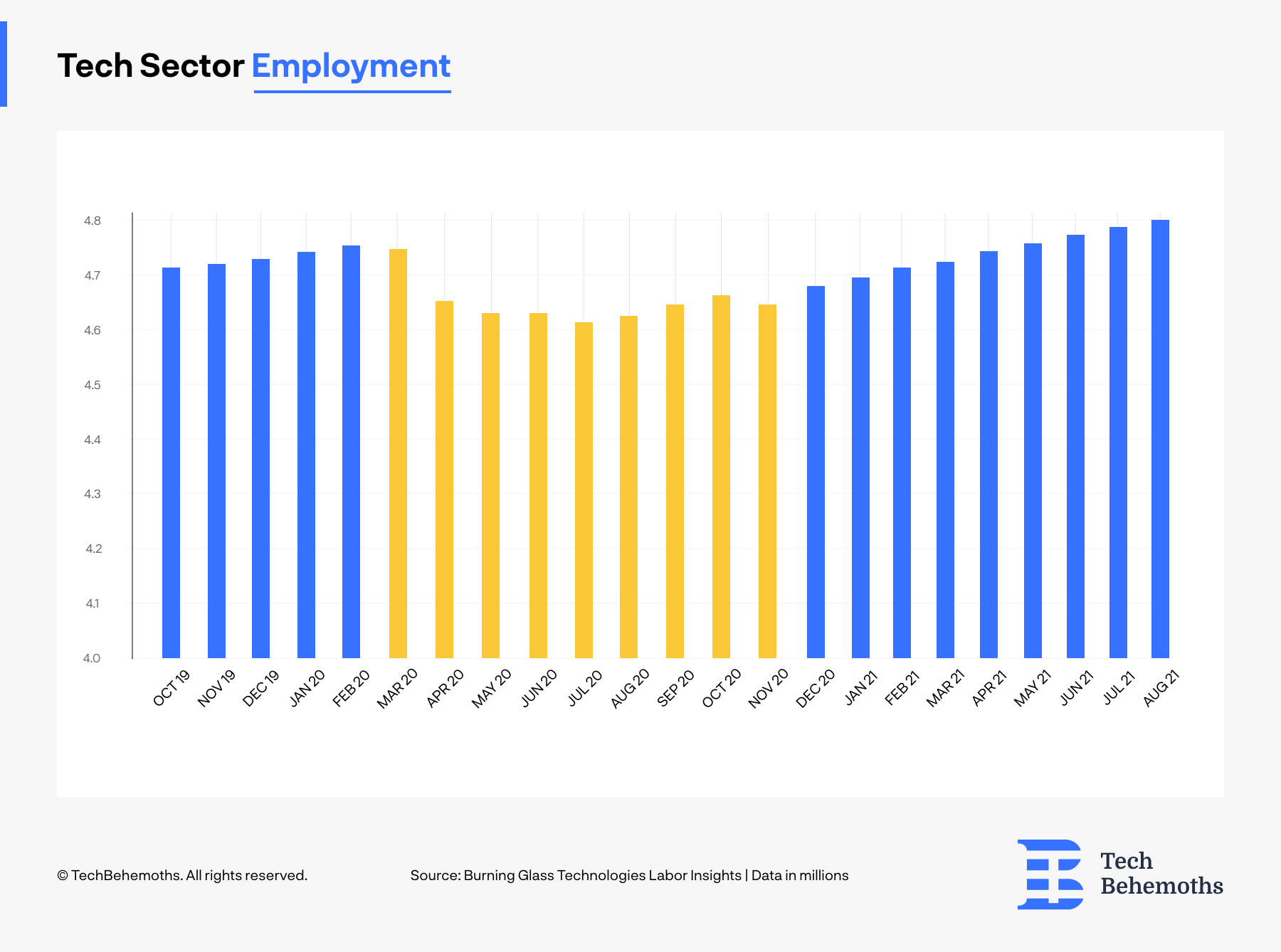 In the following months of 2020, the situation didn’t improve too much, and in some places, it even got worse as remote work didn’t prove to be the best model all companies can adapt to. Between April 2020 and September 2020, companies had the time to adjust their capabilities, and apply protective measures for their employees.

Starting October 2020 up to December 2020, the situation stabilized, and the tech sector was on solid, but the remote ground. The same period is also the cold period of the year that didn’t give too much of a choice to companies either than apply the remote work model combined with other social aid, such as psychological aid, financial compensations, counseling hours - making the distance process for employees smoother.

Tech Employment Rate in the US in 2021

The first months of 2021 were marked by 2 major factors that lead to a slight growth and kept the slow and confident growth rates of the IT sector in the US, but also consolidated the economy:

Following these two events, the number of employees and the number of job posts began to grow slightly predicting the first signs of economic recovery, and at the same time of tech industry growth.

In April 2021 almost all tech jobs lost in 2020 were back, making a positive record for the industry - 8 consecutive months of growth. However, as it was expected, the new tech jobs that came back as a number didn’t hold the same title as in 2020: telecommunication and data center-related jobs lost ground in favor of software and web development-related jobs.

It is important to note that tech jobs include as well non-technical positions. While only 44% of all employees are tech occupations, the other 56% refer to sales, marketing, analytics, finance, HR, R&D, and others.

May 2021 continued with a growth of new positions in the tech sector - around 33.4K new tech jobs were added, and opened for tech talent across the US by the 5th month of 2021. It was expected to see a growth of the tech sector since multiple businesses went digital and there was a strong demand for projects in this field, especially for web and app design and development.

June 2021 proved to be the month where tech companies gained confidence and started to hire more professionals than in the previous year at the same time. The number of tech occupations job postings reached the level of November 2019. At the same time, June 2021 predicts the growth that is yet to be analyzed below in this research as the upcoming months come strong for the tech industry.

July 2021 came as a stabilization period for the tech industry in the United States, where no remarkable events happened, and even no growth was registered. A much-needed correction to the employment in the US, also combined with the start of a new pandemic wave, followed by new remote-work decisions by large tech companies such as Apple, Facebook, or Twitter paused decisions in tech companies when it comes to new jobs, retirements, and releases. 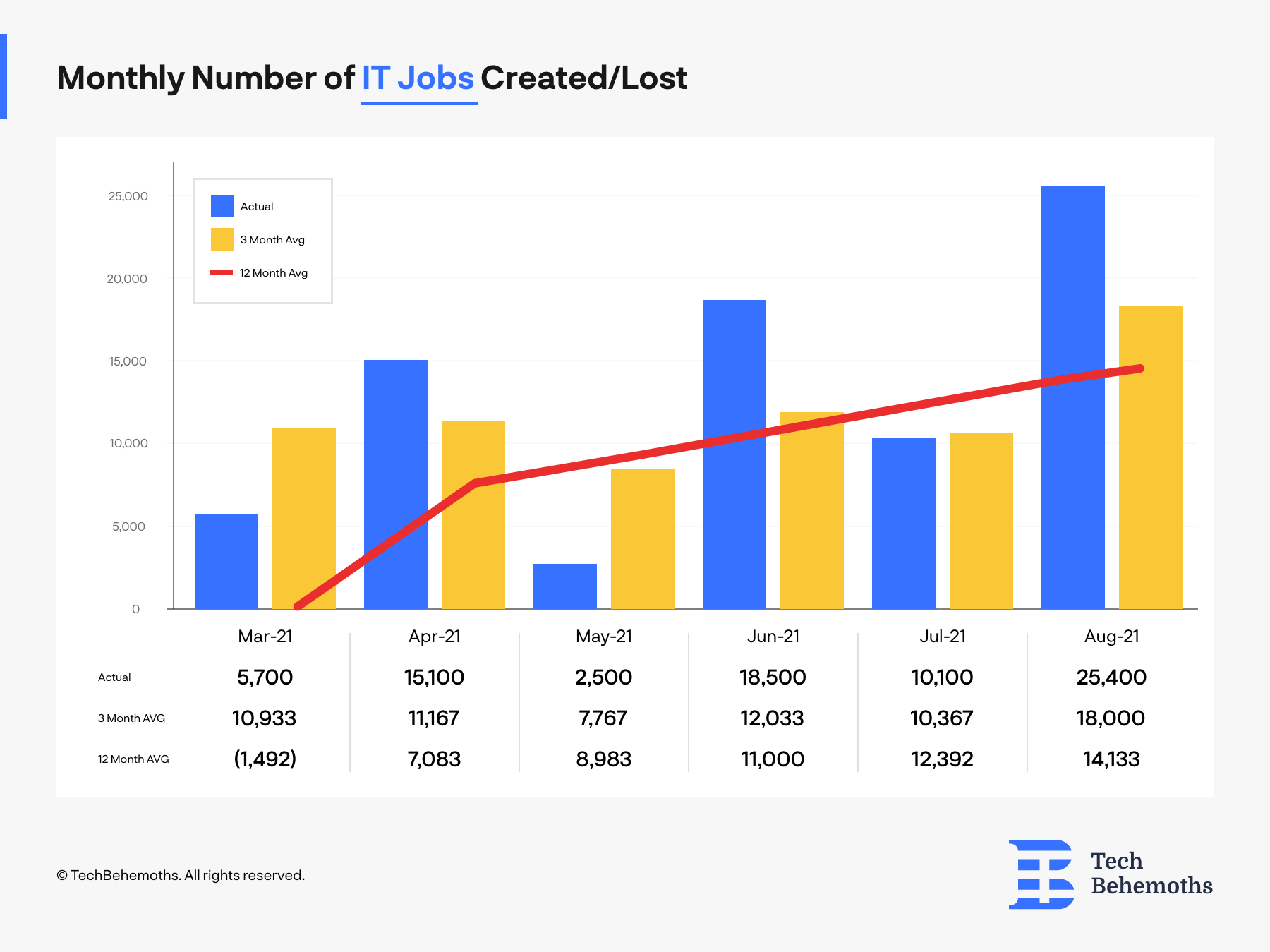 August 2021 on the other hand broke the record of new tech jobs in the last year and surpassed the 3-month and 12 month average which is a clear sign that tech companies are in a new hiring race for the new season and are preparing for the last chance this year to get professional workers eager to experience a new company.

Florida and New York share the 3rd and 4th position with around 16K tech job postings each, but where Florida registered almost 2K new job postings compared to July 2021, and also surpassed New York by 1 position in this field. The 5th-10th places are held by Virginia, Illinois, Massachusetts, Georgia, North Carolina,  and Washington. 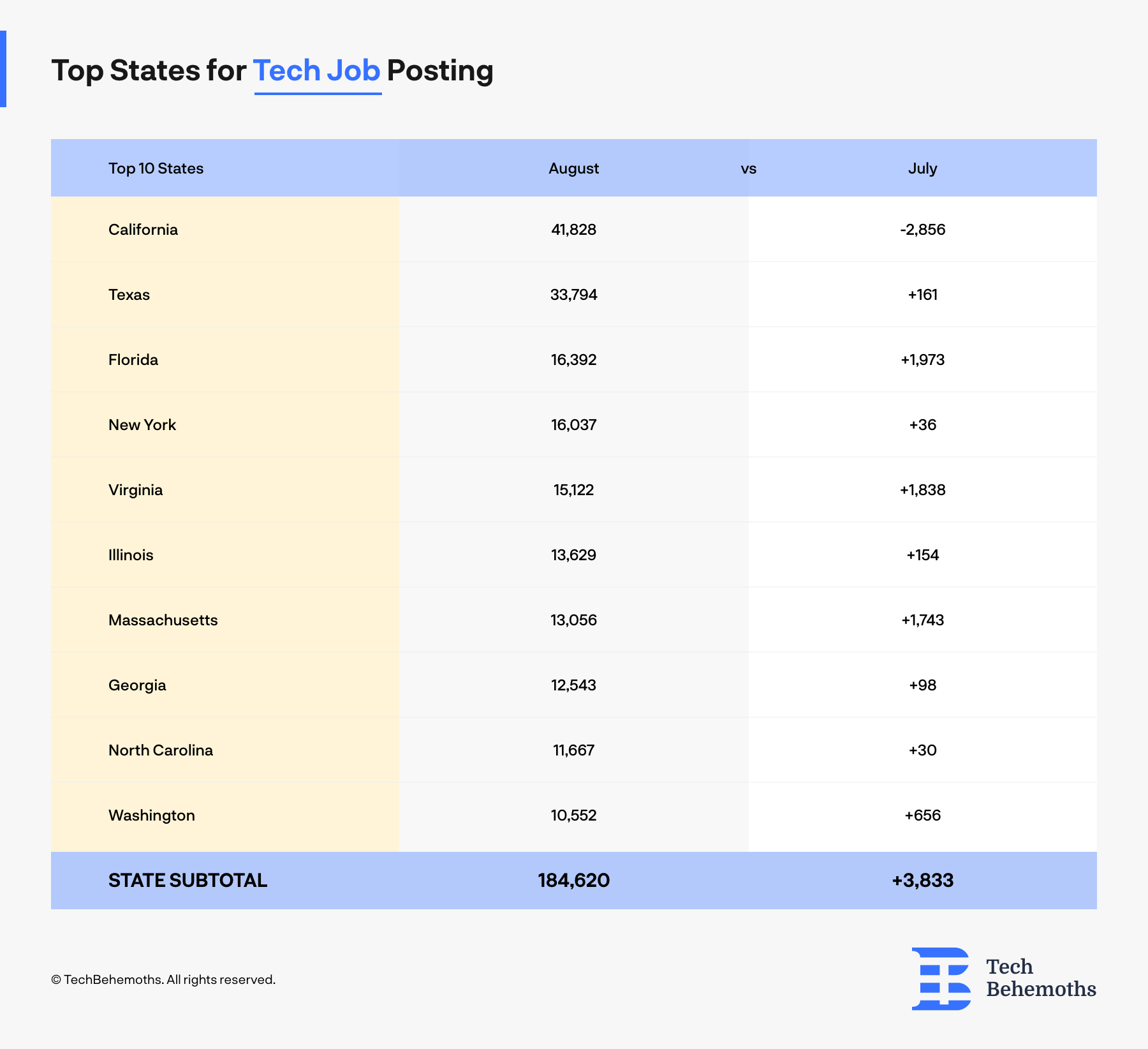 Average Salaries in the US tech sector (2021)

Both in medium and large tech companies the salaries have slightly increased overall in 2021, but the rates are insignificant and don’t speak of a shortage of tech workers in the industry.  The rule says that large companies have higher salaries, and medium companies have lower salaries for all positions, and when it comes to the executive level, this is true.

Going down to the middle managers, top tech companies are paying them with an average salary of $96.4K/year up for $95K in January 2021. Medium-size tech companies pay for the same job slightly lower: $92K/year. 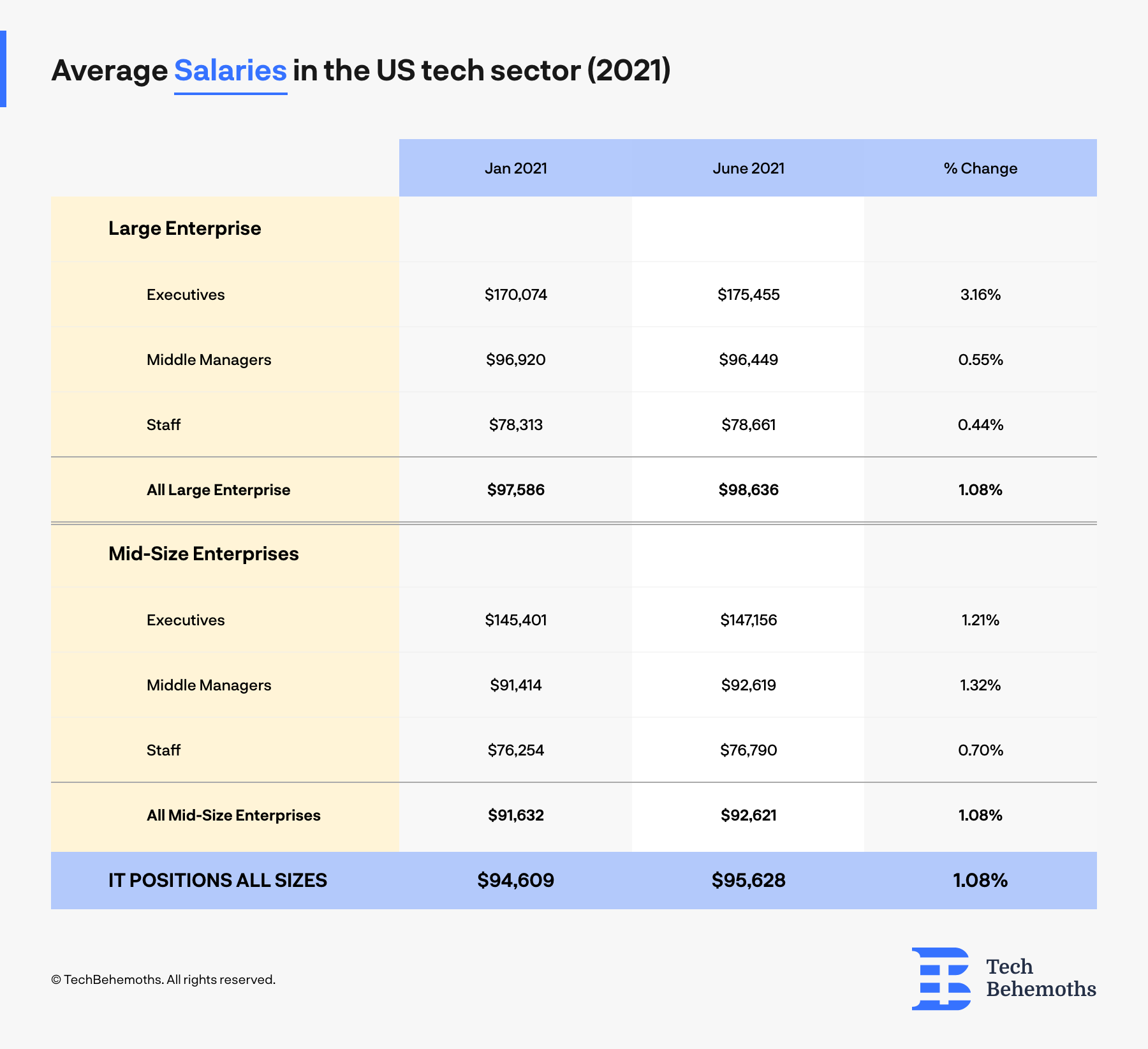 Remote Work Tech Employment Rate in the US (August - July 2021)

The majority of tech companies have decided to adopt either the Remote/WFH (work from home) model which is the only risk-free and government encouraged type of work in the US as of September 2021. Apple, Facebook, Microsoft, Google, and other tech giants became the model for other, smaller companies in the same field, and proved that it is possible to manage all processes even if the staff and management are working remotely.

That’s why in the last 4 months tech companies have started to hire remote professionals which will save space, money, and time for the company, performing hopefully the same as they would work from the office. In August-July there was an increasing demand for remote Web Developers, Network and System Administrator and Business Intelligence Analysts on a national scale in the US. At the same time, the demand for remote Software/App developers and IT/Project managers has decreased. 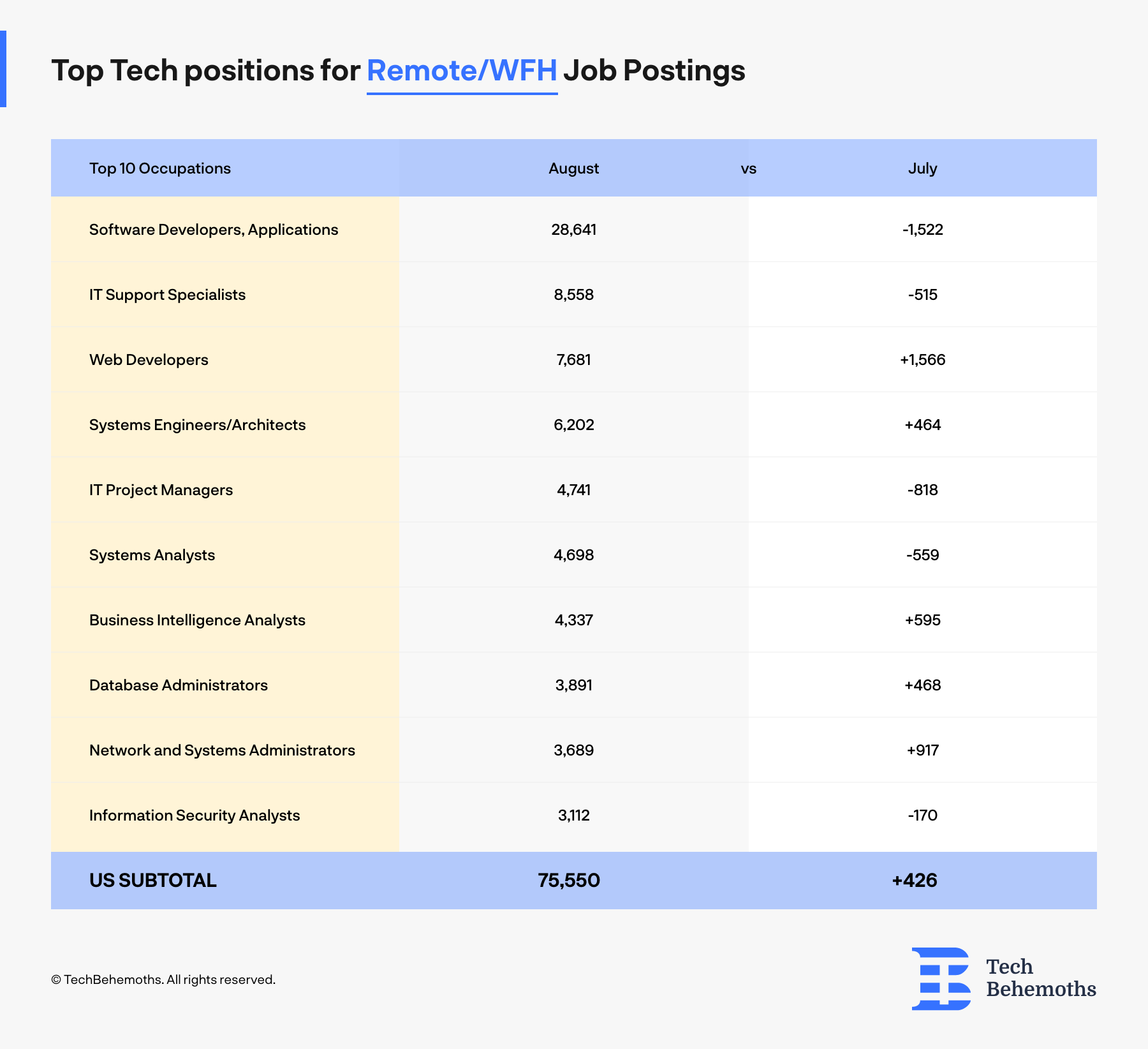 Even though 2020 has been a tough year for all industries, Tech companies have learned a valuable lesson and acquired a valuable asset - the ability to work from home/remotely. It was achieved in the least painful way compared to other industries, and it was practiced in IT for a long time now - hello Freelancing!

Do you think 2022 will be better for US tech employment?