What separates the IT-sphere from other business spheres? It’s not tied to any geographical point. Developers, web designers, digital marketers, and content creators can connect no matter where they are. And the pandemic has only contributed to the adoption of teleworking as the new norm.

That’s where outsourcing comes in handy. Add the need to cut down on costs here, and you’ll see it won’t lose its significance.

What are the regions to find quality IT specialists? For example, Eastern Europe allows you to choose from its large talent pool and great enterprises to collaborate with. As a result, you get an excellent combination of affordable costs and high quality.

With Belarus being the “emerging Silicon Valley of Eastern Europe” (as the Wall Street Journal stated), let’s take a closer look at this country. Why are Belarusian developers worth hiring? What companies in Belarus offer IT outsourcing services, and at what prices?

Why Should You Consider IT Outsourcing for Your Business?

IT outsourcing has always been a chance for emerging and large companies to save money. According to statistics, it allows them to save up to 20-30% on their expenses. Teams from other countries have competitive expertise, so why not entrust the job to them for less money?

Apart from that, outsourcing provides high-quality software development services. Specialists understand the latest trends, such as the headless commerce approach, and allow you to hire them on one-time and long-lasting projects.

So you won’t need to have an in-house development team in your company, which has become highly desired for many companies as digitalization is a prerequisite for today’s interactions.

The IT Environment in Belarus: Education and Conditions

Belarus embarked on developing IT infrastructure in 2005. It was the year when High-Tech Park (HTP) was created. What is HTP? It’s a special economic zone with its tax and legal framework tailored to IT enterprises. HTP serves numerous international firms and strives to increase their number.

What are the IT companies in Belarus nowadays? The total amount of IT firms effectively operating in Belarus is more than 1500. One thousand fifty-four of them are residents of HTP, including EPAM Systems, IBA Group, Wargaming, Itransition, and many others.

The Park contributed more than 4% to the GDP of Belarus while employing around 1.5% of the country’s workforce. It set a record for export in 2020.

Belarus can boast the creation of world-renowned products, such as Viber, World of Tanks, MSQRD, Flo, PandaDoc, among others.

There are also 21 universities in the country preparing IT specialists. Half of them are young men and women under 28. Speaking of their knowledge, Belarusian programmers are ranked 6th on TopCoder.

Here is the Belarusian technological background. What about its outsourcing in particular?

Seven businesses with Belarusian development offices are among “The 2021 Global Outsourcing 100” list. It includes the 100 best outsourcers in the world, according to the IAOP. This is an outstanding performance, considering the tight competition in the outsourcing market. Each year, the list changes with new companies, and few outsourcing companies from previous editions can find a place in newer ranking editions.

The cost is what drives you when outsourcing software development. You can check hourly rates for the eCommerce development on TechBehemoths, where various tech companies compete with each other in providing not just better prices but also better products

But what about the neighbors in Eastern Europe? According to this survey, Belarus charges less than most countries, including Hungary, Latvia, and Russia. It comes after Moldova and Ukraine. 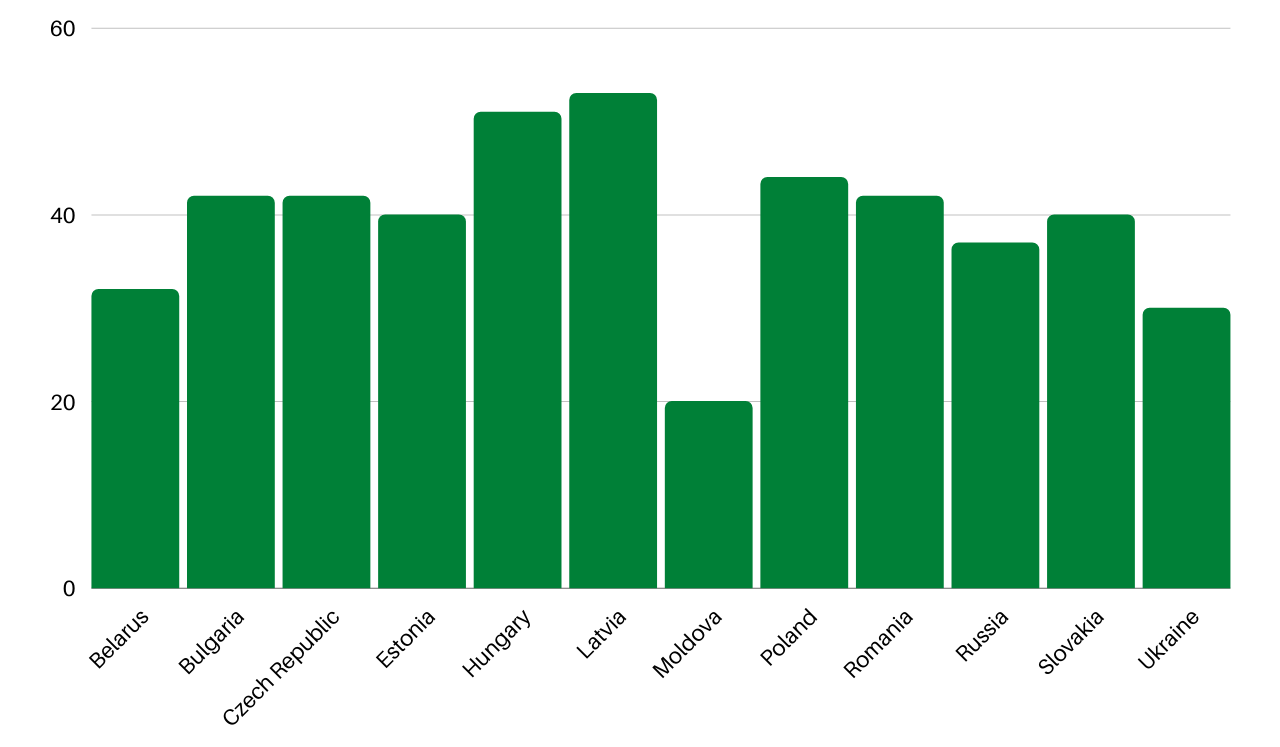 Why does Belarus offer such low costs? There are two explanations. First and foremost, the national IT industry benefits from tax breaks. Second, the cost of living is cheaper than in Western Europe and North America, and this is also reflected in software development prices

How are Belarusian Outsourcing Companies Developing in 2021?

The future may seem bright, but the challenges of 2020 changed the course. Now the IT sector is in turbulence and breaking hiring and firing records.

The official statistics show that 1734 employees left IT organizations in August 2021. It was the maximum number throughout the whole time. It’s 2.3 times higher than the previous year’s same month and 2% more than in July 2021.

Surprisingly, most IT specialists quit this summer. In total, about 5,000 IT professionals left firms between June and August, which is two times more than last year. 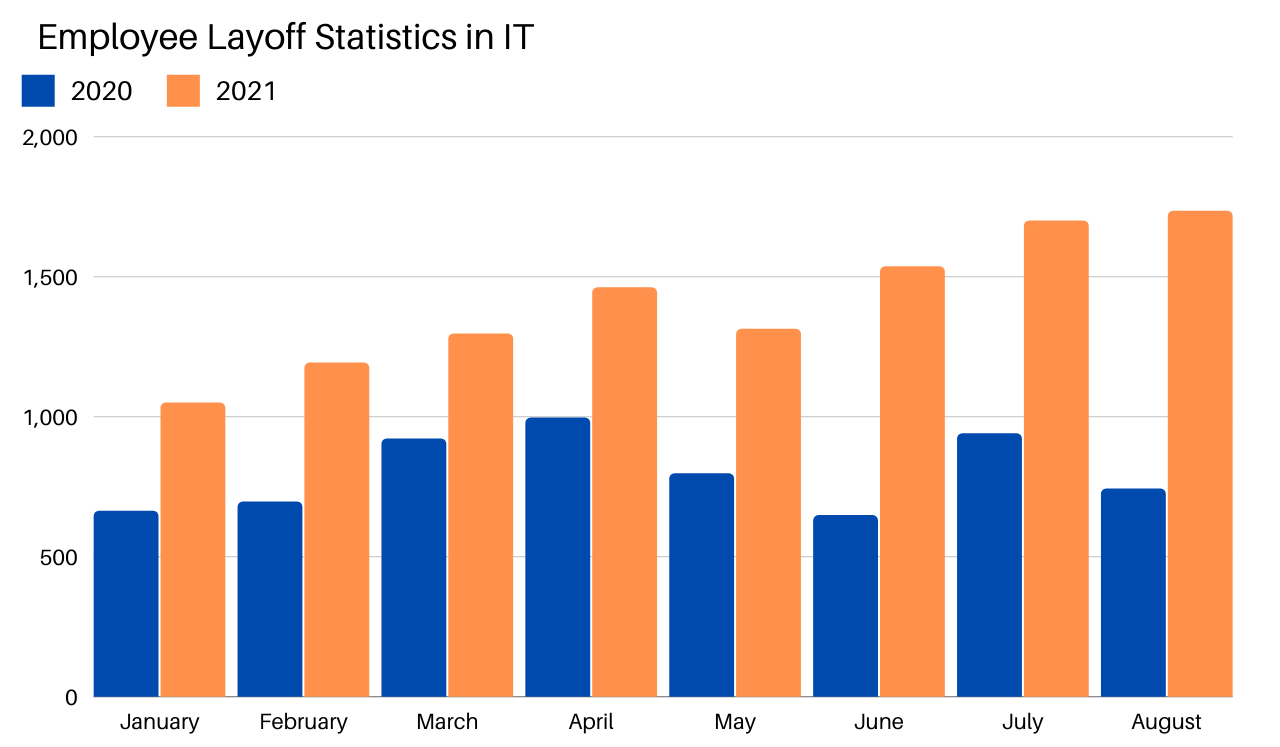 Source: National statistical committee of the Republic of Belarus report

Why do Belarusian developers leave? The first reason is relocation. Some companies or experts decide to relocate to neighboring countries, such as Poland, Ukraine, Lithuania, etc. They either follow where most of their employees go or suggest moving to the existing offices, closing Belarusian branches.

Among such companies are:

Other reasons include natural employee turnover, a desire to create or join startups, and so on.

But there are positive signs too. IT firms began to hire more specialists. IT recruiters employed a record number of new employees in August, which was 1925 people. Such growth happened due to the HTP expansion. The Park welcomed 62 new residents at the end of July 2021. 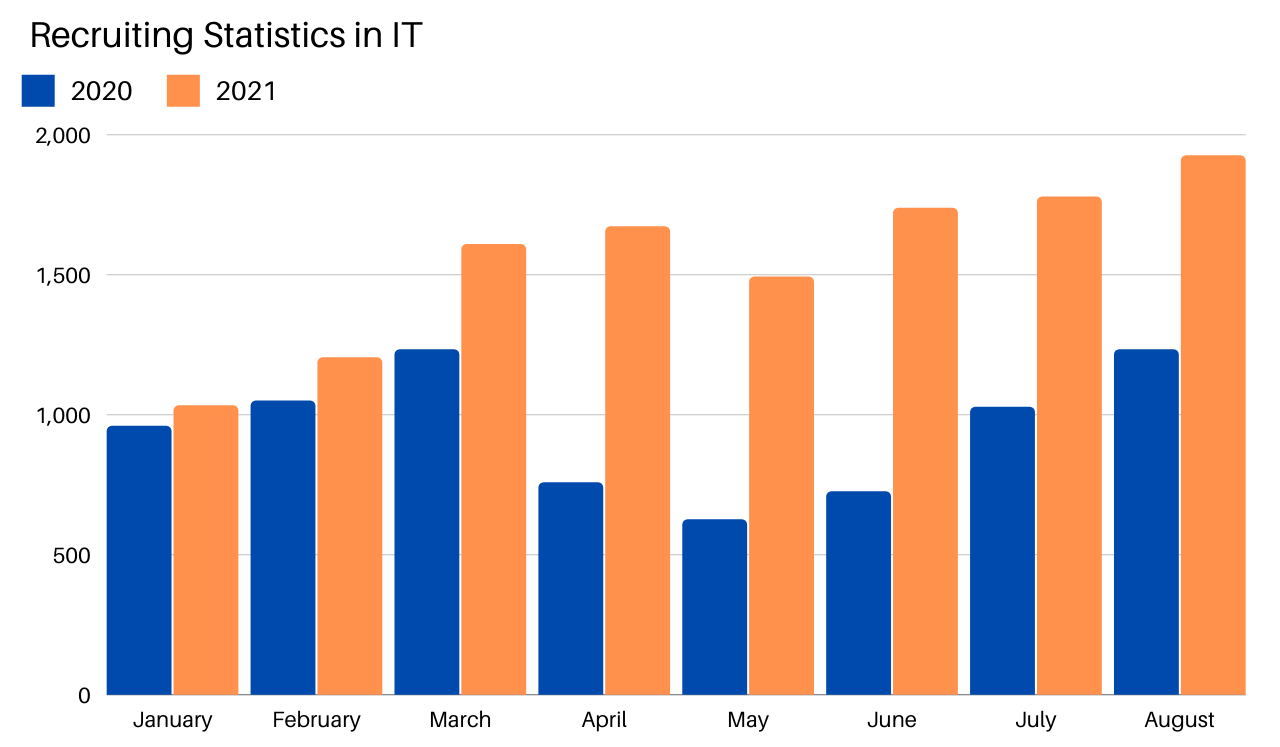 Source: National statistical committee of the Republic of Belarus report

The number of vacancies is growing, which indicates the need for new specialists in the IT sphere. Let’s take a software development company, Itransition, as an example. According to the most popular media about the IT industry in Belarus, dev.by, Itransition is looking for 290 people in November 2021 to work in Belarusian offices (up from 220 in June).

Another outsourcing firm, iTechArt, has doubled over the year and continues to expand. You will now find over 500 available job openings.

ISsoft, which is one more outsourcing provider, has opened 170 vacancies in Belarus. It’s 2.5 times more than in June.

Companies also host events such as Hiring Weeks to help find employees faster. Plus, there are fewer layoffs as of November 2021. Despite the figures being higher than last year, 1,537 people left in September, compared with 1,650 specialists in the summer.

Why is Belarus worth considering as an outsourcing destination? It has high international business ratings and global firms hiring remote teams in Belarus. Such corporations include the Bank of America, Deutsche Bank, Samsung, and eBay.

Outsourcing to Belarus isn’t just about saving money. It’s about hiring developers with scarce skills and a solid academic background. Other advantages include similar European culture, proximity, and the “do it right approach”.

Alex Husar, chief technology officer at Onilab with 8+ years of experience in developing PWAs, Magento migration, and Salesforce development. He graduated from the Czech Technical University and obtained a bachelor’s degree in Computer Software Engineering. Alex’s expertise includes both full-stack dev skills and a strong ability to provide project-critical guidance to the whole team