How Much Do .Net Developers Earn in Denmark? 2022 Overview

Danish .Net developers are reportedly among the best-paid tech specialists in the country and also in the region - between  DKK 420.000  - DKK 640.000/year as of September 2021. But when it comes to salaries, each country has its own tax policy for each specialty and industry, and in Denmark for example the regular CIT is 22%.

.Net is an open-source development platform created by Microsoft for app building, and the entire ecosystem has both backend (ASP.Net) and frontend (C# & VB.Net) frameworks. At the same time .Net is a relatively old framework and was released in 2002.  The future of .Net is considered .Net Core - released in 2016 which is a redesigned and optimized version of its previous release that was originally intended to become a cross-platform framework that provides support for Linux and macOS.

Taking into consideration that the framework has a twisted history and exists for 20 years and has two base versions, there should be enough developers to cover the market demand, but as a matter of fact, the deficit is higher than expected.

In Denmark, the number of .Net developers open positions is higher than several hundred according to multiple sources, including Glassdoor and Indeed. However, the real number might be higher than that, as the IT industry in Denmark is in the full development phase and multiple companies open new offices in Denmark due to talent pool, developed IT infrastructure, and one of the happiest countries on earth.

From year to year, the .Net developer salary has varied depending on market demand and the number of skilled professionals available in the country. In 2021, even salary researchers didn’t reach a common range .Net developers earn yearly or per month. It may be because Danish IT companies update their salaries often and also because the remote/work from the home model has been adopted by multiple professionals and companies at the same time.

The first source, Glassdoor mentions that .Net developers earn on average ~DKK 36K/mo. This is the equivalent of ~EUR 4,850, and most probably the wage is before taxes. On a side note, Glassdoor specifies that this is the only information submitted and is flagged as low-trust.

According to the second source, PayScale the average yearly salary of a .Net developer in Denmark is ~ DKK 445.311/yr which is close to EUR 60.000. This means that monthly a .Net developer earns around EUR 5,000.

PayScale doesn’t specify the information source, but it provides additional information about different levels of .Net Developers and their salaries. 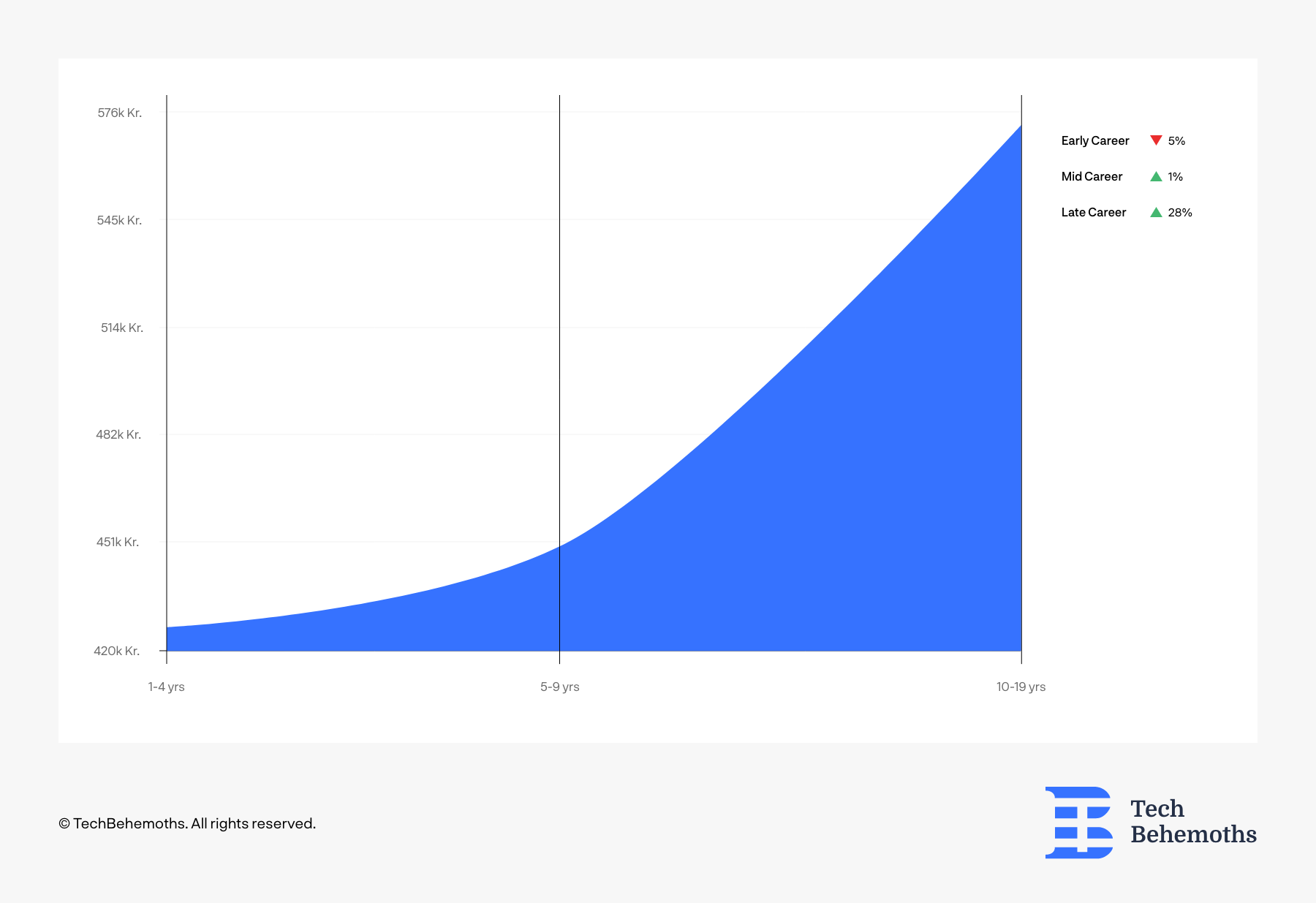 The average salary of a .Net developer in Denmark

As was expected, an experienced .Net developer is paid better than a junior or a middle and having more than 10 years of experience or more can add an extra EUR 13,000/year for the developer.

The third source, The Economic Research Institute talks about higher wages for .Net developers in Denmark. More precisely, the data relates to ASP.Net, and the individual wages of ASP.Net developers are probably higher.

While Glassdoor does not provide information about entry-level and senior .Net developers, PayScale and ERI have significant differences in their data.

As .Net developers are sought by many companies, including in Denmark, it is expected that their salaries will also grow in the next several years. The ERI talks about DKK 683.675/year by 2026, which is equivalent to EUR 93.955. This is a 14% increase compared to 2021 data and means that would be a market demand increase for their services of at least the same rate.

.Net Developer Salary in Denmark vs Other Countries

Just like any developers, .Net developers’ salaries vary from country to country and even depend on the city and part of the city. To have the full picture and a wider view of the entire situation, here is how .Net Developers are paid in different countries compared to Denmark:

.Net Developer salaries in Denmark vs other countries

The other side of developer work, enhanced by the pandemic that also existed previously is freelancing. Yet, freelancers don’t enjoy a permanent workplace and are not stuck to a salary base making it almost impossible to track their average wage per year or even per month.

Based on what’s on the .Net developer market as of September 2021, freelancers have incredibly various tag prices even if they come from the same country, or work with clients from the same location - take Denmark, our example.

On Upwork for example, .Net developers in Denmark charge hourly between $10 up to $150, but there are several moments to discuss:

Of course, senior-level and experienced developers that are looking for a side-project would charge the opposite from the two above cases.

Another platform for freelancers - PoeplePerHour has the same lowest rate as Upwork which is $10, but the highest hourly rate for .Net developers is $80. This is almost two times lower than on Upwork. The one thing that differentiates these two platforms is result accuracy, but that’s another story. In this case, also the same two moments apply, which leads me to believe that starting as a freelance developer in 2021 might be a little late.

Danish .Net developers are among the best paid in their field, at least on paper, which makes the country one of the most attractive for companies that provide such services and talented professionals at any level that seek a job in this position. Freelancing as a .Net developer could not be a good idea including for and from Denmark except if you don’t have a solid portfolio and background by now.

So, taking into account all pieces of information related to this research, it is definitely better to find a specialized .Net company that will provide you as a developer a platform from which you can start your career, experience, and gain more financial independence in Denmark.

On a side note, feel free to explore the best .Net companies in Denmark with a proven track record. Some of them could be hiring .Net developers and you could be the one to get the job.