Canada has one of the lowest unemployment rates in the world, despite the pandemics and global economical crisis. But the road to a relatively low unemployment rate was conditioned by a series of factors such as labor reform and immigration policies for the skilled and necessary workforce.

As one of the leading internal markets and industries, the Tech ecosystem was also exposed to new regulations and was aimed at by bills that concerned qualified international migrants. However, the unemployment rate in the ICT in Canada was way lower than the country’s average. According to Statista, between 2001 - 2019 the average unemployment rate in Canada was between 5.7% - 8.3%, while in the ICT industry the same rate was between 2.4% - 4.3%.

In the chart below is the graphic representation of how the unemployment rate in Canada evolved over the past 18 years: 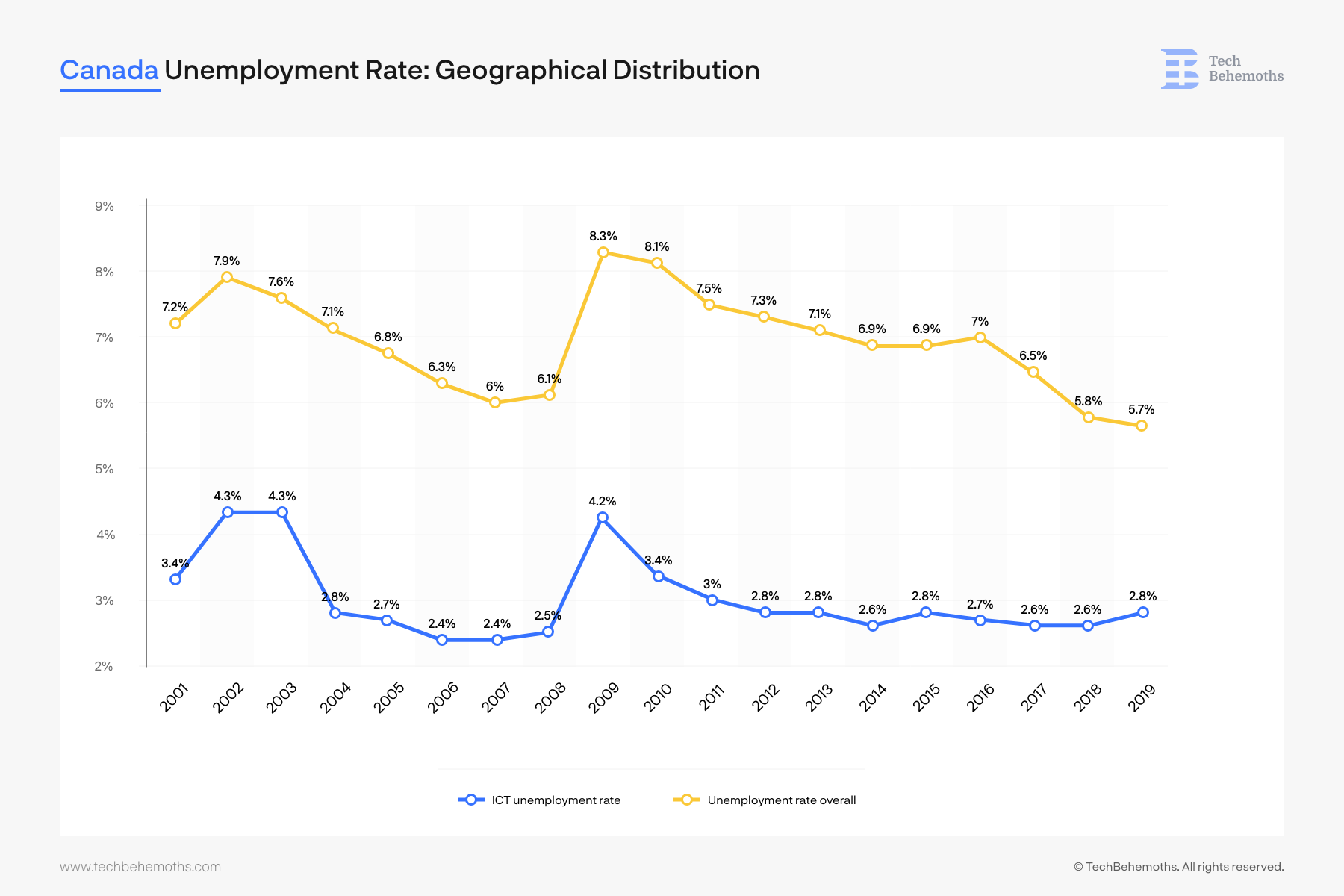 Just like in any other country, in Canada, there are regions with different unemployment rates. In our case, the southern parts are more populated and more tech centers are located there. Generally, the region bordering the US is considered Canada’s economical engine, with multiple job opportunities in all industries.

That’s why in Alberta and Saskatchewan the employment rate has increased by 25.000 and ~10.000 jobs respectively, while other regions haven’t registered a strong growth rate in employment. Also, Quebec has known a drop in the unemployment rate with more than 18.000+ new hirings. But of course, there is a side effect - the self-employment sector decreased significantly.

Below is the general unemployment rate graphically represented which will provide a better understanding of how things stand in Canada. 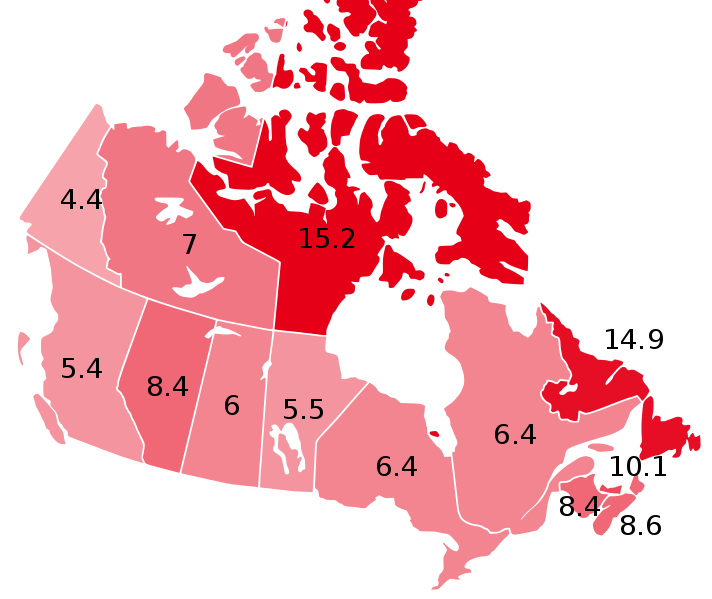 It is fair to say that in Canada’s northern regions live fewer people than in the southern part, and thus there is lower service and product demand, but also smaller workforce concentration. But besides this obvious reason, there is a demographic situation the country is confronted with: Youngsters always tend to migrate to the south seeking a job opportunity in the big cities, and the state of Nunavut for example, is mostly populated by 40+.

When comparing the data previously mentioned with Canada’s tech centers it all makes sense. All 13 largest cities in Canada are also situated in the southern part. Call it milder climate, active lifestyle, more job opportunities, or even fiscal facilities - they all transformed the largest cities into tech hubs. And mostly due to these tech hubs Canada plays a major role in the global ICT market. 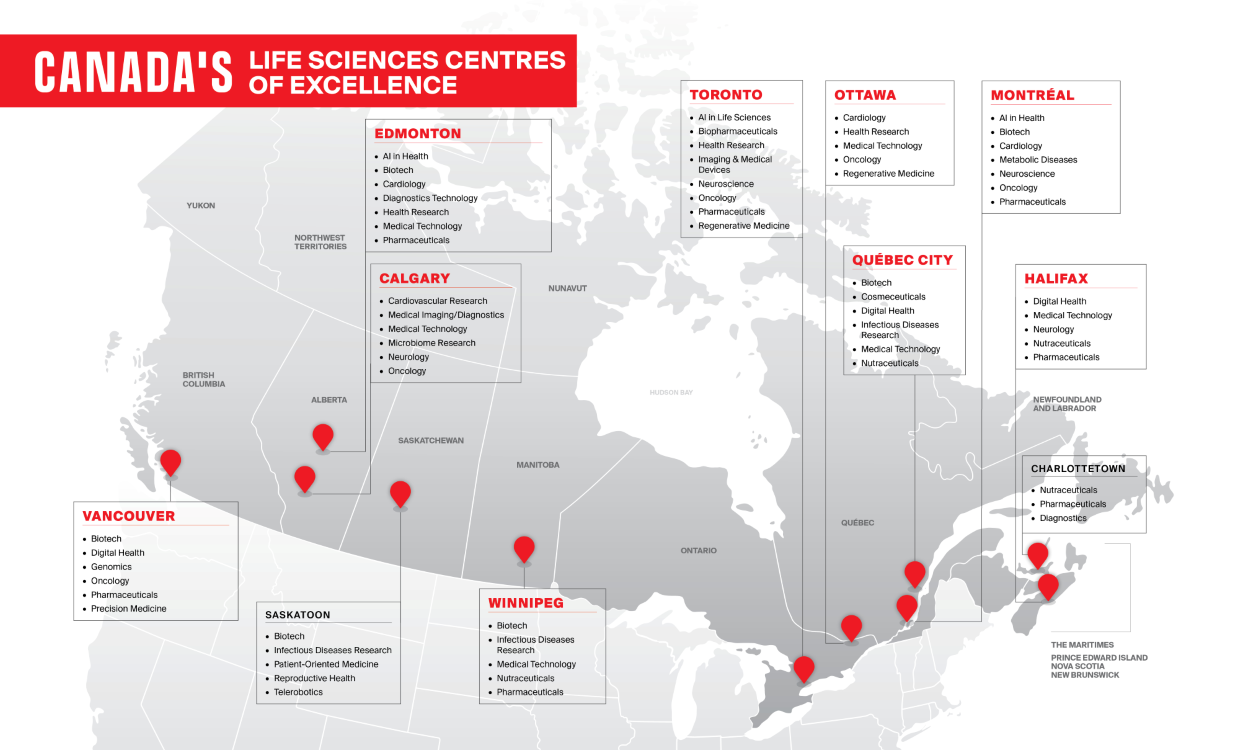 Why Unemployment in Canada’s Tech Industry so Low?

The new technologies are an important stimulus for economic growth in all countries, and Canada is not an exception. Over time the Canadian tech industry took the leading role and created hundreds of thousands of new jobs and brought investments all over the world as if the government subventions and tax releases were not enough.  In this way, the Tech Industry created comfortable jobs for skilled specialists from all age groups, which attracted in their turn most of today’s employees in Canada.

Another important aspect is Education. Universities confronted in the mid-2000s with an unexpected demand for specialties such as Software Engineering, Cyber Security, UX design, and Network Management. It would have been a mistake not to create jobs with an emerging young generation specialized in tech and IT. And above all, nowadays the ICT helps the digitalization process of all other industries, which generates more productivity and earnings.

Taking into consideration that tech services in Canada are in high demand, and so the number of qualified workforces, It is clear why Canada’s tech sector has a low unemployment rate compared to other sectors. According to BusinessChief, Technology is the top 3 thriving industries in Canada, and it is only expected to grow.

What’s the unemployment situation in the neighboring countries?

When we mentioned that Canada is one of the leading tech nations, it means that there are several other countries, most of the western which are either ahead, either not so far behind Canada’s tech industry. And even if the economic model of each country differs, The US or Mexico are in close geographic proximity to Canada, and even form up together along with other Central-American countries the NAFTA (North American Free Trade Organization). In these regards, the unemployment rate in tech from Canada, the US, and Mexico should be comparable. 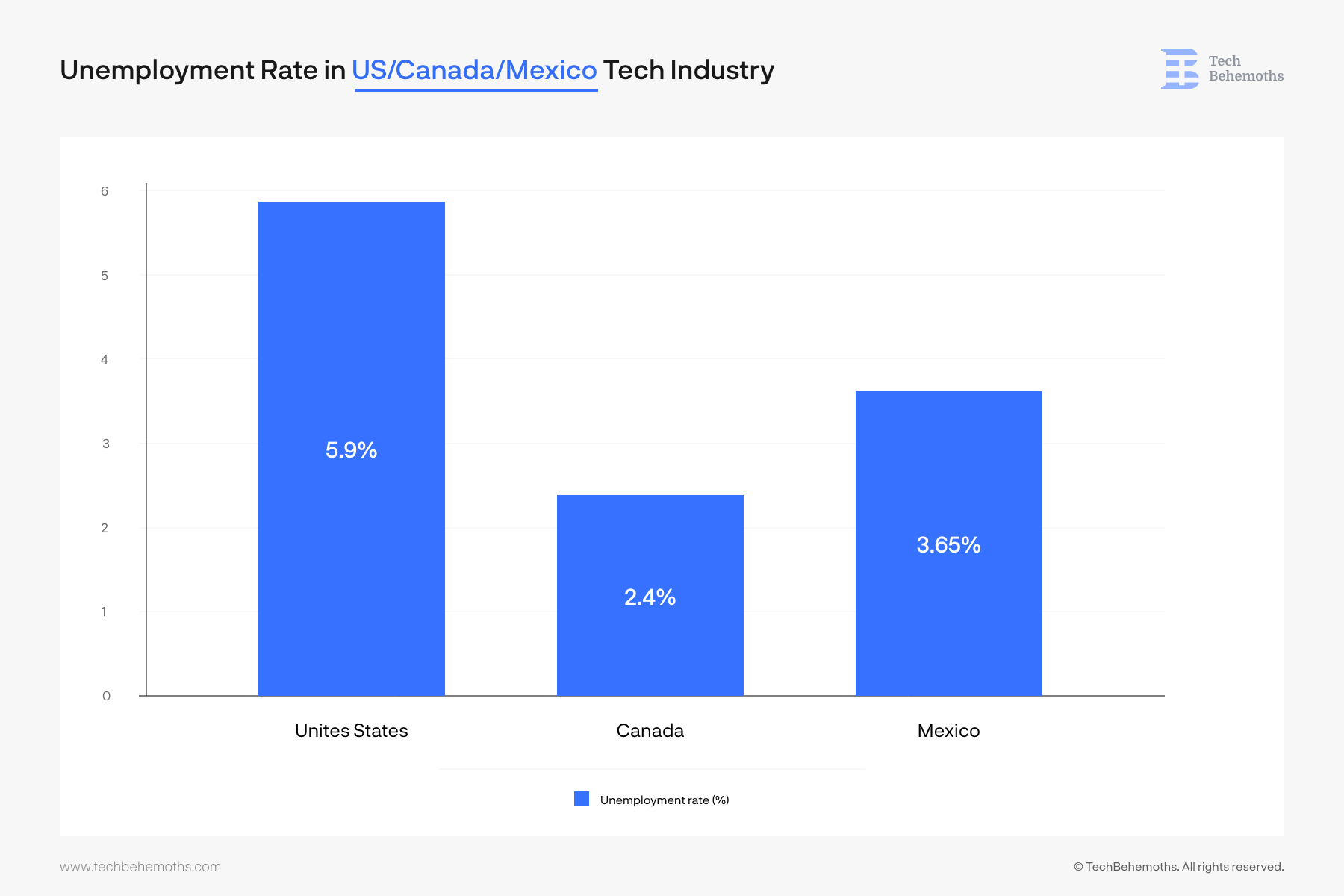 The unemployment rate in Canada's Tech Industry is the lowest in North America, and one of the lowest in the world, which makes the country a great destination for investors, SME’s and skilled professionals. Probably we are witnessing a technological boom in Canada, which will boost the country’s performance and contribution to the global economy. On the other hand, the unemployment rate is not the only performance indicator in tech, but along with innovation, budget, and education, it is possible to provide a more precise measurement of how healthy a country’s tech sector really is.

With this said, Canada’s tech scene most probably will continue to be a global leader in the future 20 years. If you are interested in Canada’s tech industry and eager to know more about its performance, check out the descriptive article on TechBehemoths blog

Is tech unemployment lower in your country compared to Canada?