How Much Should You Pay an Artificial Intelligence Developer in Canada

Artificial Intelligence is becoming a trend lately as multiple IT companies focus on this direction as the market demand for artificial intelligence services is growing. This points to higher wages for specialists in this field.

The core professionals of AI are developers, and companies ransom them generously for their skills and services. Canada, which is one of the leading countries that focuses on the AI industry, continues to bring business processes to another level with the help of Artificial Intelligence and Machine learning. Now, there is only one question left for business owners and managers - what is the price tag that should hang on the services an AI developer provides?

What Tasks Should An AI Developer Do?

The first thing that companies take into consideration when hiring an AI developer is the job itself. The key responsibilities are not too many on the paper but weigh much. The main tasks that an AI developer is assigned to are as follows:

These responsibilities are commonly accepted and assigned to AI developers in most companies. In Canada, the standards for hiring an AI developer are high, and there is a large spectrum of knowledge, skills, and experience that companies demand just to make sure that a professional hired for the AI developer position can accomplish the above-mentioned tasks.

To sum up these two chapters - the skills and the knowledge help perform tasks responsibly. An AI developer’s performance is the key factor that contributes to the money a company should pay for the services.

The average wage for entry-level AI developers in Canada is $53,593/year according to  Salary Explorer and Glassdoor

The last source - talent.com, indicates that the wage of an entry-level AI developer in Canada is  $52,781/year - which is closer to the data from SalaryExplorer. 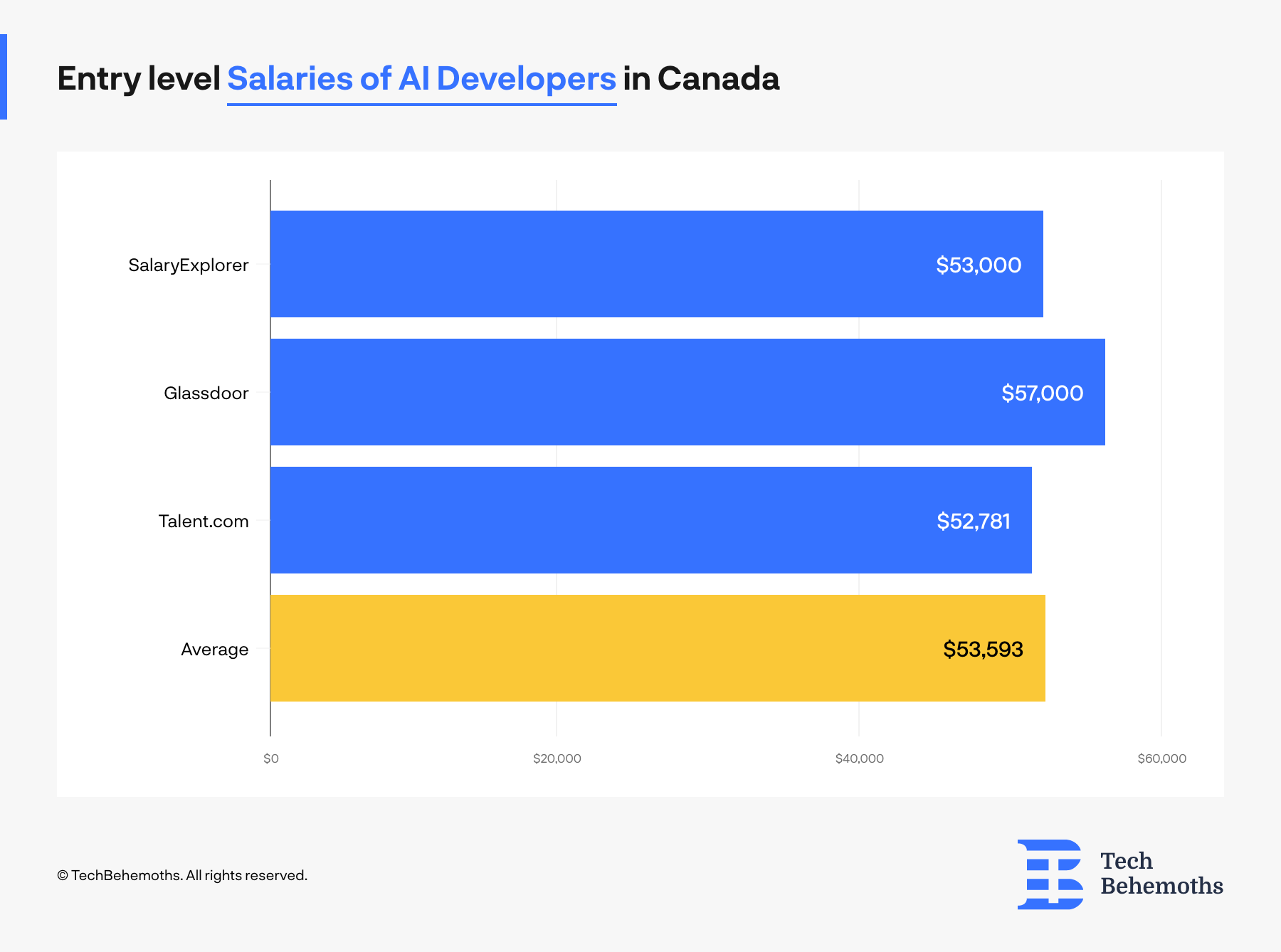 It’s obvious that a company focused on AI development should have more than 1 developer, and thus, the yearly budget starts with $110,000. However, hiring entry-level AI developers is a long-term investment. It’s about training, teaching, and having the patience to get the first results. Faster development of an AI system requires skilled and experienced developers, and this takes us to the middle AI developers, and also to the average wage of a AI developer in Canada.

The average salary of an AI developer in Canada

According to Glassdoor, SalaryExplorer, and Talent.com, the average salary of an AI developer in Canada is $90,556/year. 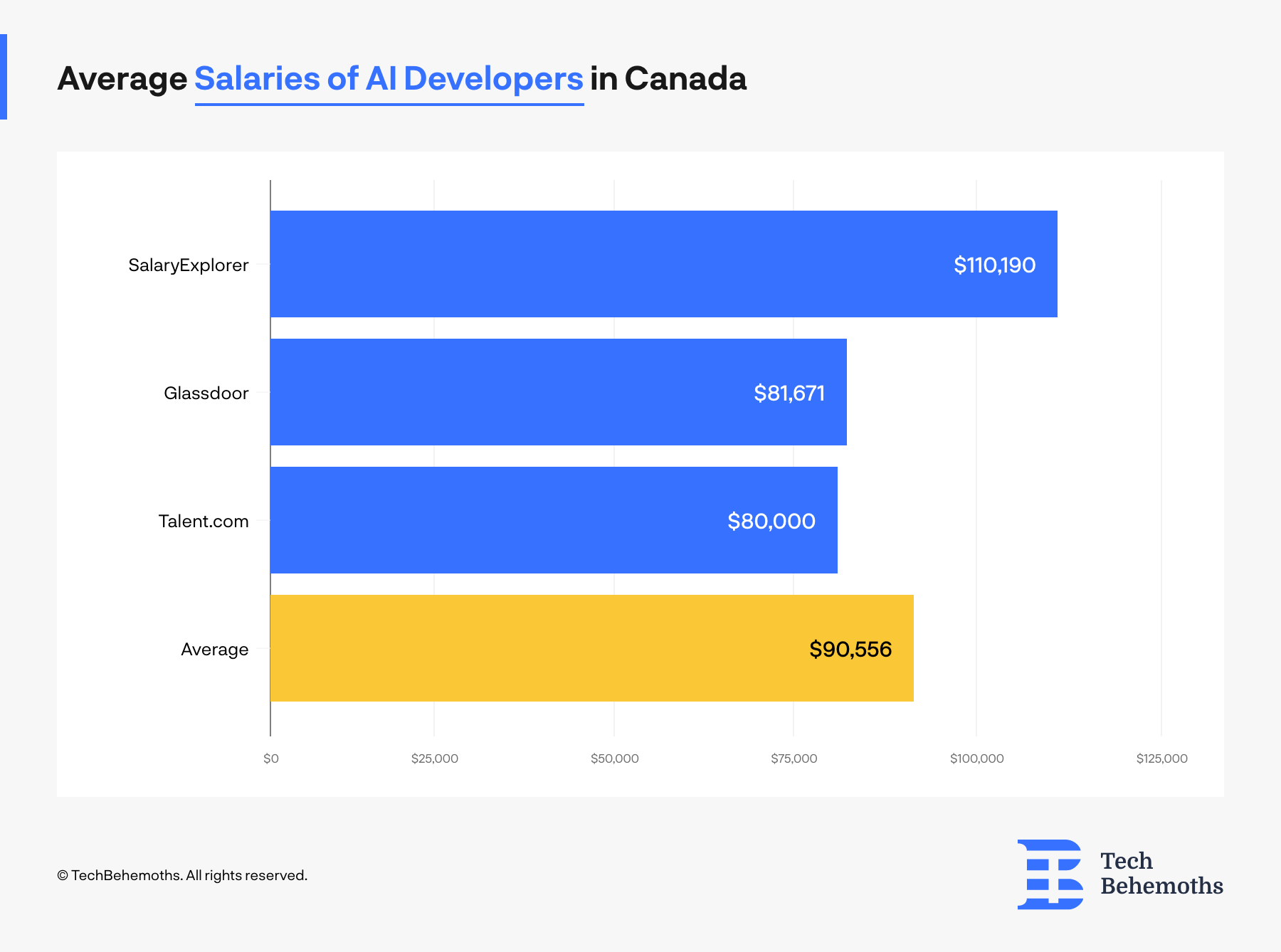 It is important to note that the larger the country, the more differences are between salaries. Canada is one of the best examples here, and Talent.com has a good point when comparing salaries for AI developers in Ontario, and in Alberta. 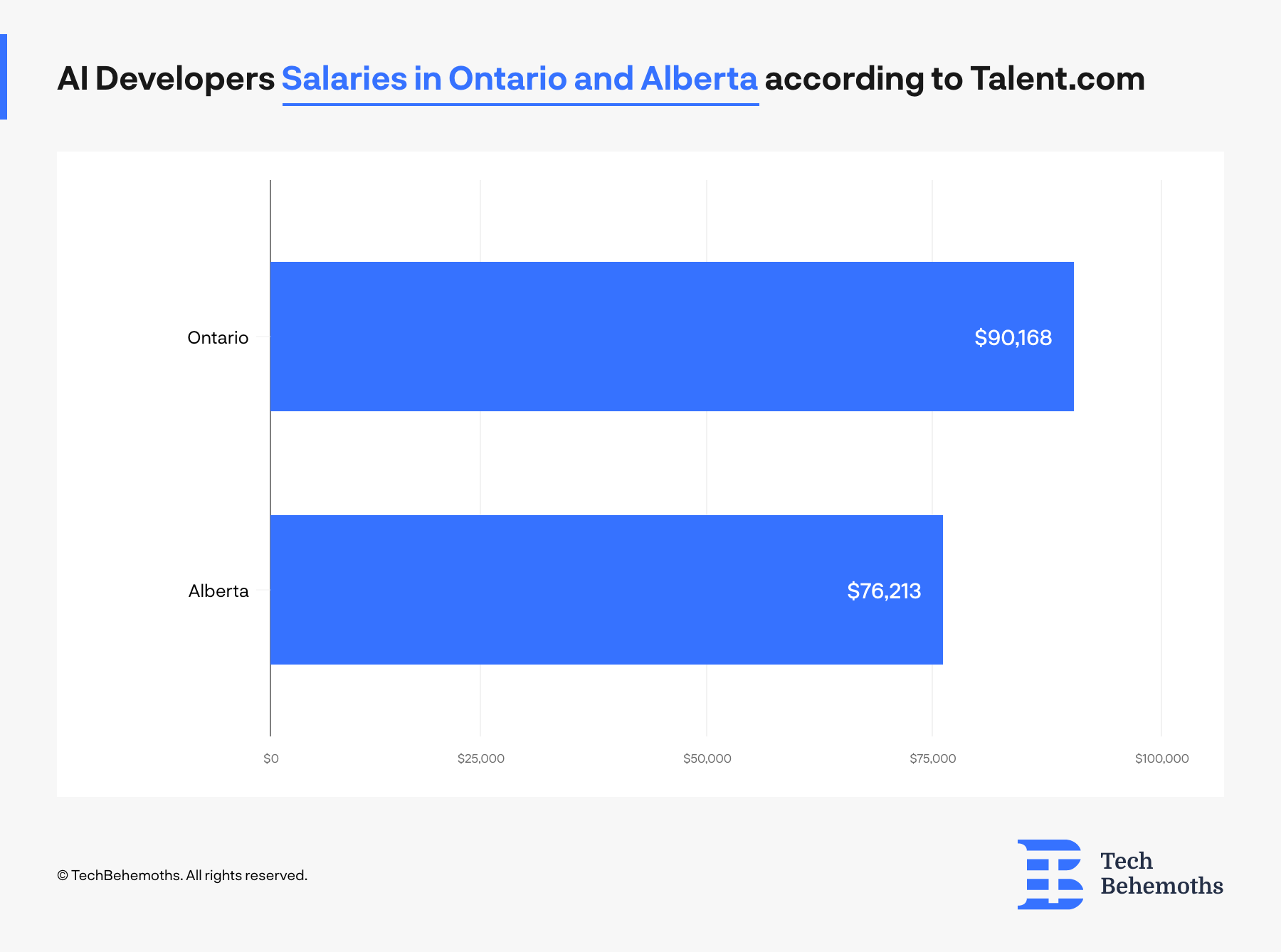 So in addition to experience and skills, location is also an important factor in deciding the salary for an AI Developer. In smaller countries, the difference between salaries is not so big, because the talent pool is located in 1-3 cities, close to each other, and the demand for professionals comes per country rather than per city or region.

The budget for a faster-growing AI company grows from $110,000/year up to $180,000/year if it hires middle AI developers. The extra $70,000 per year is paid for the experience which comes with other benefits. Middle developers can train and help novice developers grow. Also, a better knowledge of programming languages required by the AI industry allows a faster pace in finding solutions.

The only ones that have more value, experience, and knowledge than middle AI developers are senior AI developers, but it will cost significantly more, for several reasons.

How Much a Senior AI Developer earns in Canada

To catch a senior AI developer and make him/her work for you is a mission almost impossible. First of all, AI development is a relatively new branch of IT, and not so many professionals manage to reach the senior level, at least compared to other types of developers. Second of all, the senior level is somewhere between 4-6 years of experience and retirement - a very short timeframe where most professionals don’t seek a new job place and are satisfied with the conditions where they work. 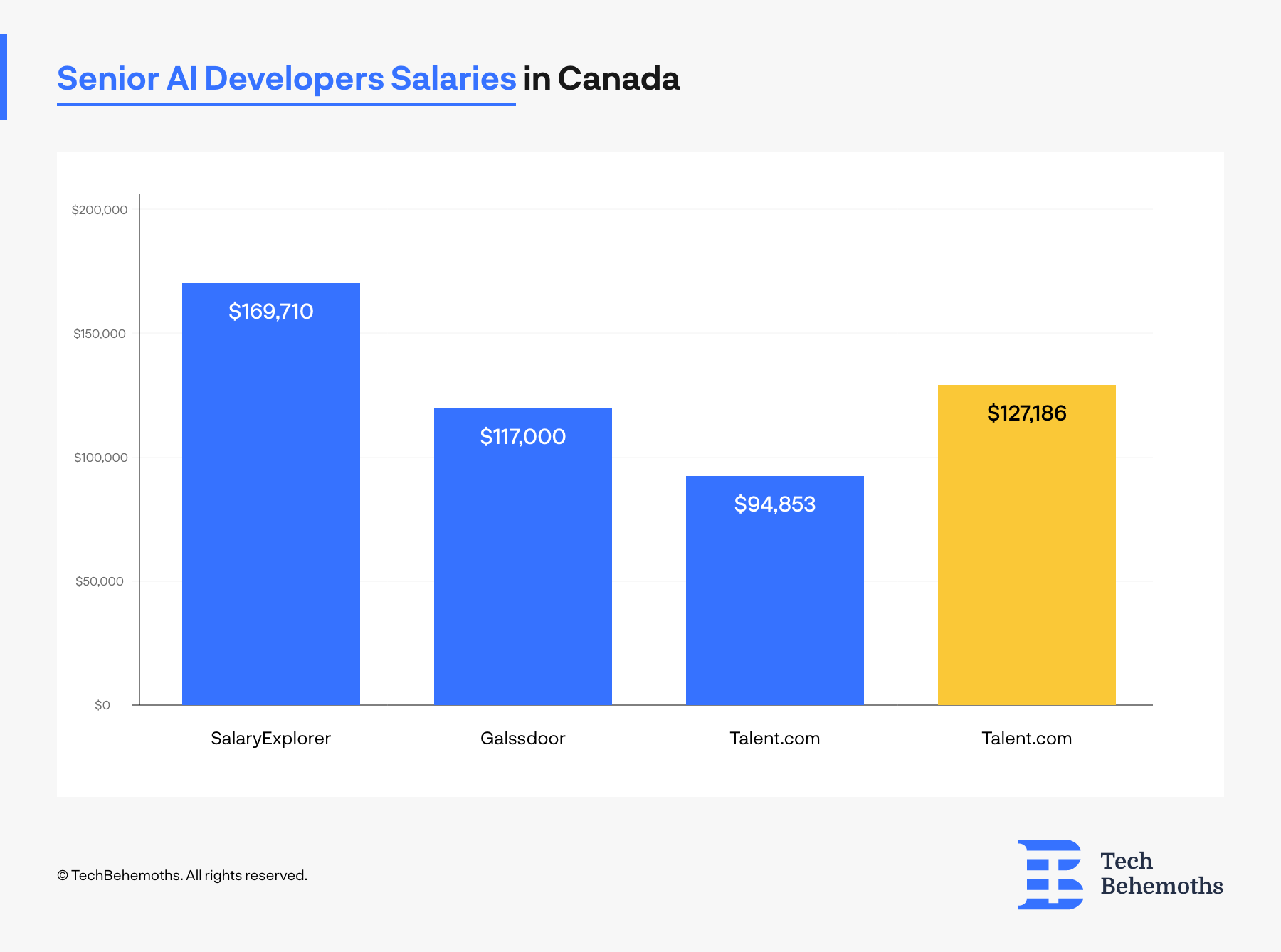 If hiring 2 middle AI developers costs $180,000/year, then 2 senior AI developers would charge approximately $250,000/year. The project size usually determines the costs both for human resources and other spendings. But if it’s a project that doesn’t require too much skill and ability even if it’s large, probably there is no need to hire senior AI developers, as middle developers would do just perfectly fine. Nonetheless, there is a risk, and is scalable depending on how much the company demands from the dev team.

If we follow the evolution of salaries from entry-level to senior AI developers in Canada, it’s obvious that the prices for level to level grow significantly, and so do the demands and expectations. So it’s a justified growth since a company buys not only the skills, but also the time of each professional 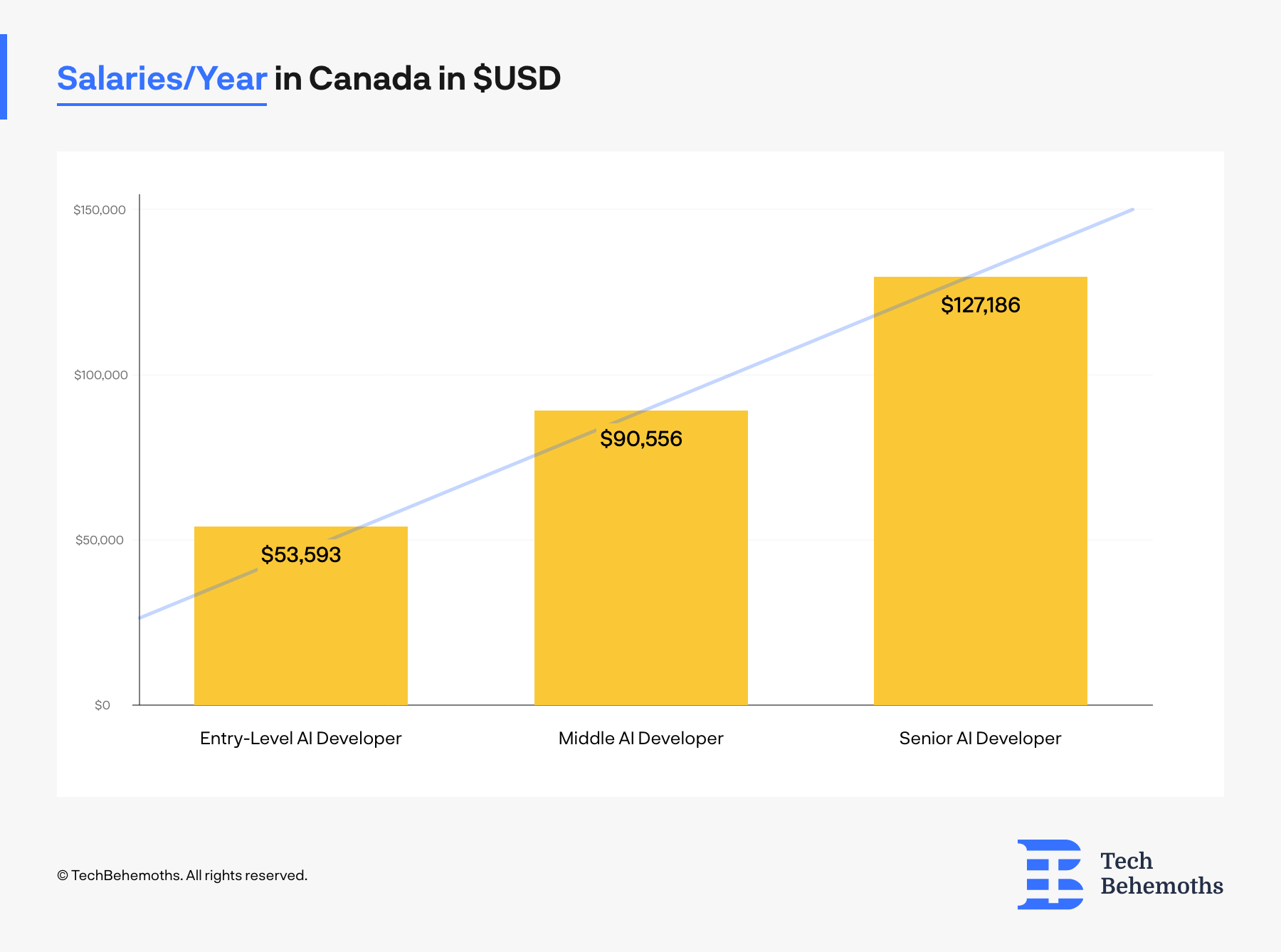