How Much Flutter Developers Earn In Europe in 2022

Flutter has been launched in 2018 by Google and by 2022 it managed to become a popular framework among developers, used in almost all European countries. Flutter basically allows building cross-platform applications and is a cost-saving solution recognized and used by hundreds of thousands of businesses and IT companies. Seen as an optimized digital solution, developers started to learn, create and build with Flutter more and more. By April 2020 the number of Flutter developers worldwide reached 500,000/mo.

In our previous research, we identified the main skills required for a Flutter developer and touched a little bit on the earnings topic. But just like any other job, people earn differently for doing the same work, and Flutter is not an exception. For example, if in the United States a skilled developer with good knowledge and skills of Flutter would earn around $110,000/year, in Germany the same developer would earn around €90,000/year before taxes.  Not all Europeans pay as German companies and not all American companies are similar to European ones.  So, here we will find out how much Flutter developers earn across Europe.

For a better understanding, we divided Europe into 6 regions where salaries and living costs are relatively the same, and it makes it easier to compare countries within their group, and then to compare groups with each other. So, let’s get started.

How Much Flutter Developers Earn In Western Europe?

The first group of countries  - Western Europe is probably the best paying. But, let’s be honest with ourselves - these are the leading countries in Europe and in the world when it comes to digitalization, web/software development, and # of IT companies per capita.

Nonetheless, there are visible differences inside the group, as some of the western European countries have companies that pay double Flutter developers compared to other companies coming from countries in the same group.

Here is the full list of average wages that Flutter developers get in western Europe:

It is still important to note several moments when we are referring to these numbers are salaries for companies in the above-mentioned European countries. First of all, Flutter developers are also referred to as mobile developers, software developers, and app developers. 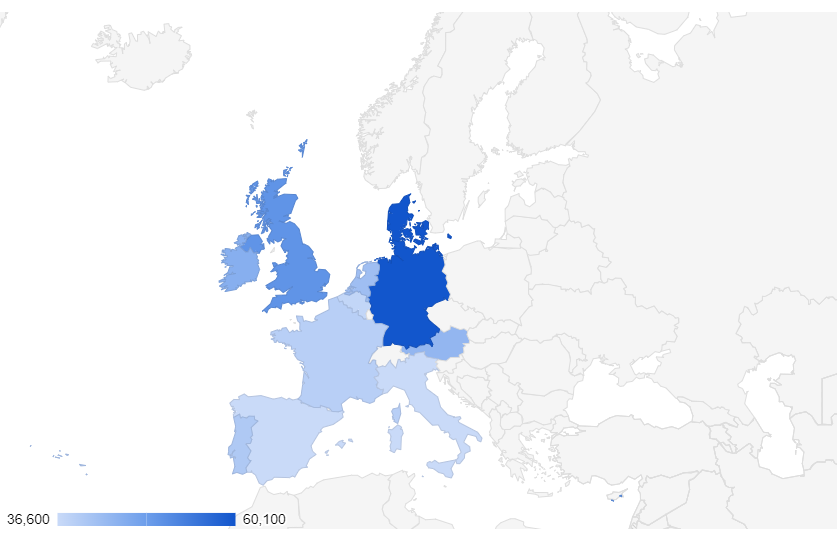 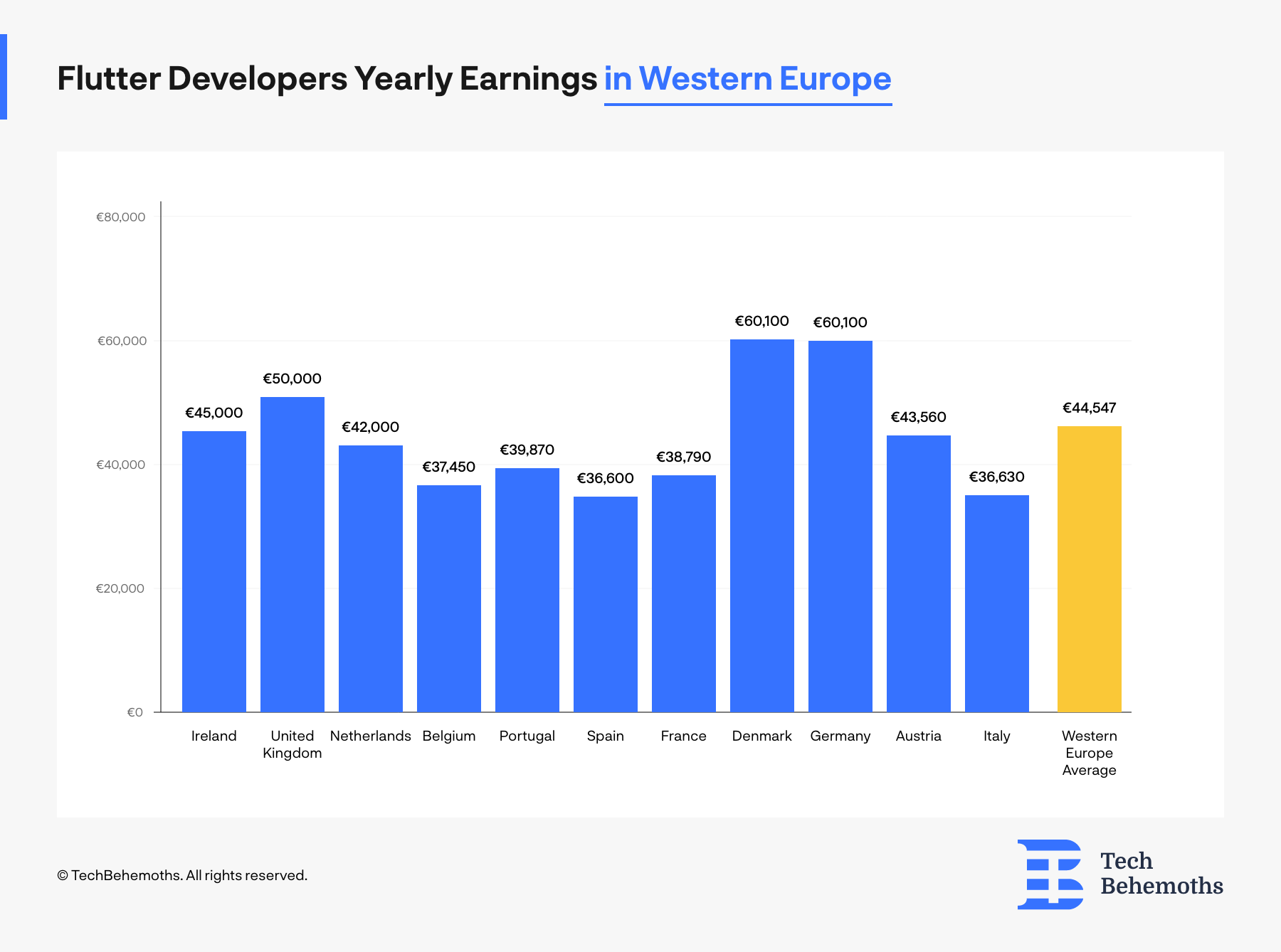 Compared to the average salary in the EU, which is around EUR24,000/year, a Flutter developer earns twice more. This comes to support the statement that IT is one of the best-paid industries in the XXI century, so far.

But as we move from west to east of the old continent, the wages drop including for Flutter developers. Behind this may be outsourcing, lower living costs, or a cheap workforce along with underqualified professionals. Nonetheless, in every analyzed country, a developer earns more than the average per country. Let’s take for example our next European Region - Central Europe.

How Much Flutter Developers Earn In Central Europe?

The second group of countries - Central Europe will refer exclusively to V4 countries: Poland, Hungary, Czechia and, Slovakia. Companies coming from here, provide large-scale outsourcing services, including web and app development. This means that Flutter developers would earn less than in Western Europe and the US. However, their qualifications and skills probably make them look better compared to the same Flutter developers coming from Eastern Europe, or Western Balkans.

Generally, IT as a field has no physical boundaries, and the only reason to group developers by country is how companies relate to the country where it is located. For example, In Germany, companies are able to pay more for web development services as there is more demand for such services, the living costs are also higher, and also taxes. At the same time, not all Polish companies can afford to pay the same way as German companies do since they compete directly with them, and try to attract more clients with a lower hourly rate, and also have a different label in this field.

Now that is clear why salaries grow or drop based on country, let’s get to how companies from central European countries pay Flutter developers: 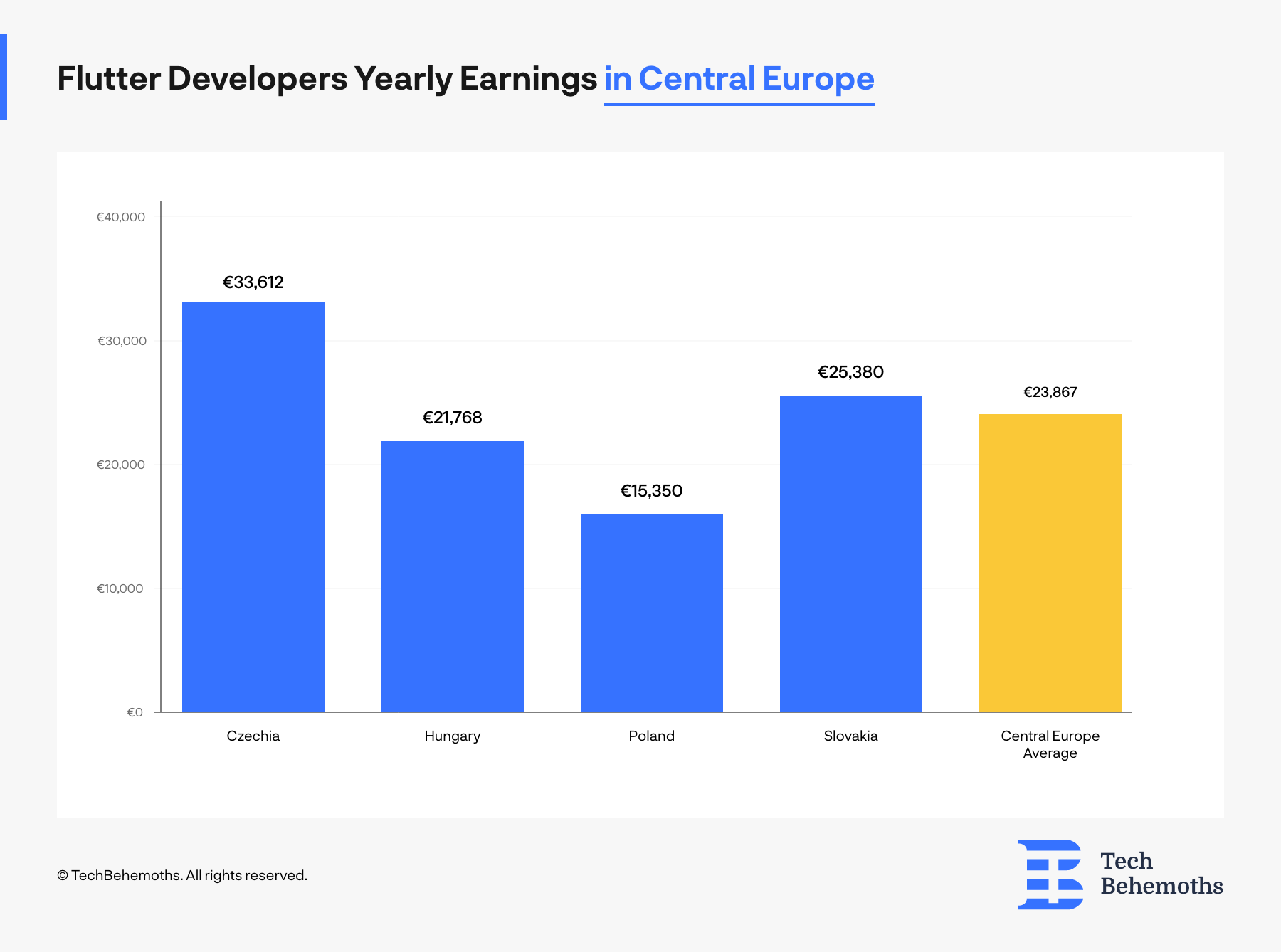 Flutter developer salaries in the next region are even lower compared to Central Europe. This, despite that companies from this region developed and improved their capabilities to deliver projects significantly lately. Nonetheless, the tech industry in these countries is still at the emerging phase and it will take some time to catch up with the western region.

How Much Flutter Developers Earn In The Western Balkans?

The Western Balkans region was supported significantly by the EU in the past 5 years, as local governments shifted their efforts to improve the IT infrastructure, labor conditions, and salaries. It was a successful alignment in terms of technologies so far, and it is supposed to scale each country’s IT capabilities in the near future. 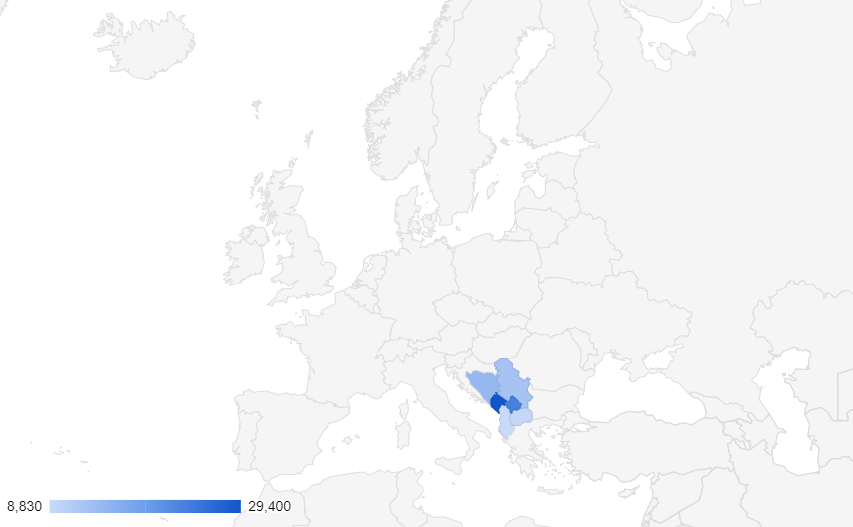 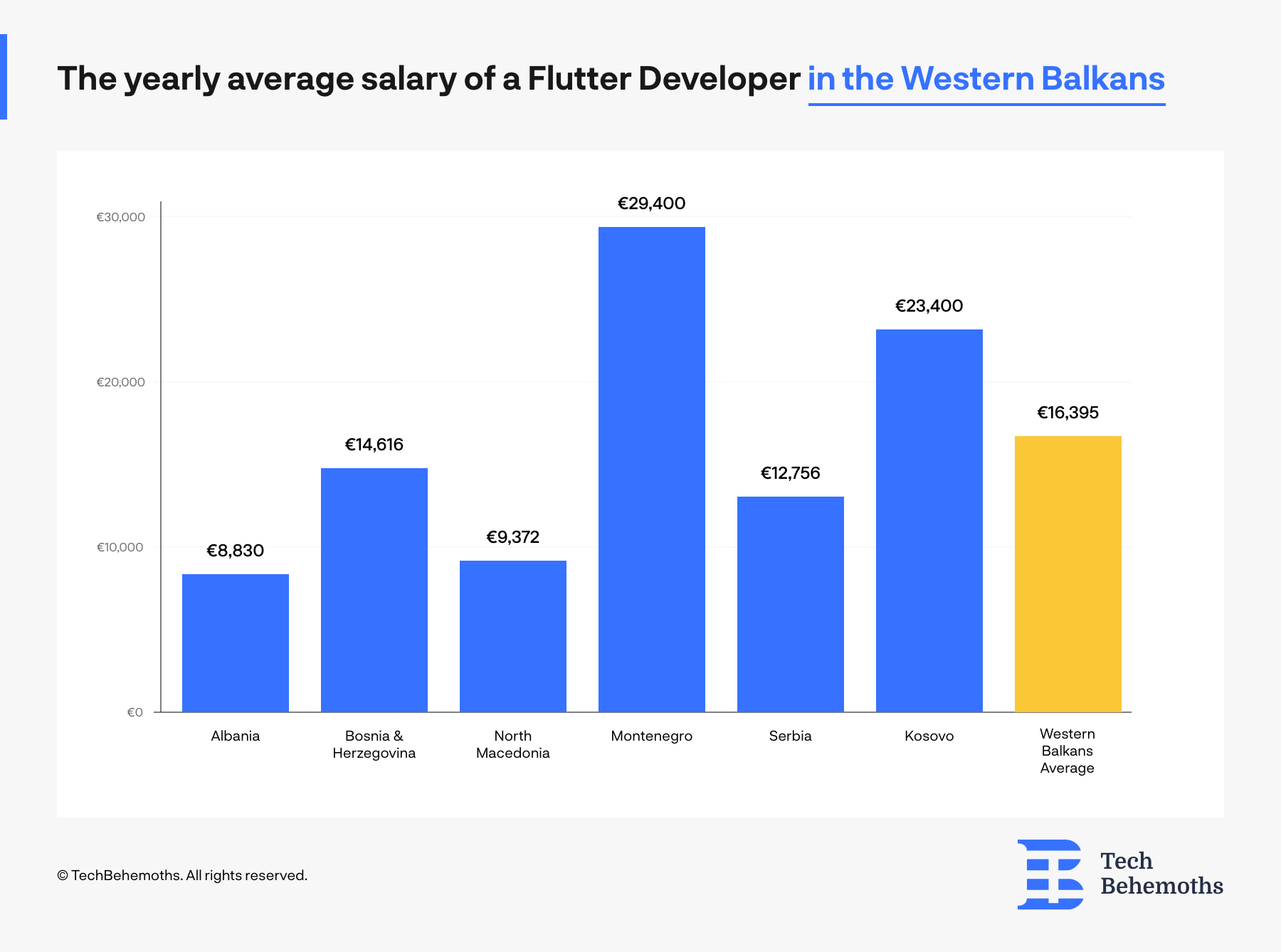 Based on all collected data, the average salary of a Flutter developer in the Western Balkans is EUR 16,395/year. With companies from Montenegro and Kosovo paying considerably higher their Flutter developers compared to other neighboring countries, the average result is 10,000 EUR less than in Central Europe.

How Much Flutter Developers Earn In Eastern Europe?

Companies from Eastern Europe are paying a decent amount of money for Flutter developers, and above they are competitive including for companies from Central and Western Europe. It is the region that probably covers the largest territory in Europe and includes both EU member states and non-EU countries. 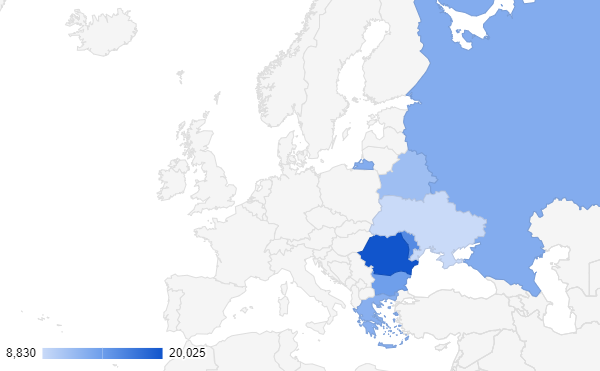 Romania advanced highly in digitalization in 2021 and has become a regional tech hub that connects western companies to eastern skilled developers, including those specialized in Flutter. That’s the reason why companies from Romania pay the best Flutter developers compared to other countries in the region.

On the second position, there is Bulgaria, which also followed the general European trends and progressed in digitalization. As a matter of fact, Bulgaria has one of the biggest numbers of registered IT companies, confirming that IT is a successful business direction.

If Moldova was a pleasant surprise in terms of salaries in Eastern Europe, Greek companies bring the bitter taste when it comes to tech in the region. Or it may be simply because Greece has never focused so much on Tech and IT until lately. This way or another, Greek IT companies pay among the lowest for Flutter developers in Europe.

In the end, there are Ukrainian IT companies, and companies from Belarus, that are somewhere behind at Flutter development salaries. But at the same time, both countries are huge talent pools in Europe and have operational centers across Europe. Most of IT companies from Belarus and Ukraine chose to earn clients by lowering the prices instead of asking for more and taking the risks.

Now, let’s go get the numbers for each country and see exactly how much companies pay for Flutter developers based on their location in Eastern Europe: 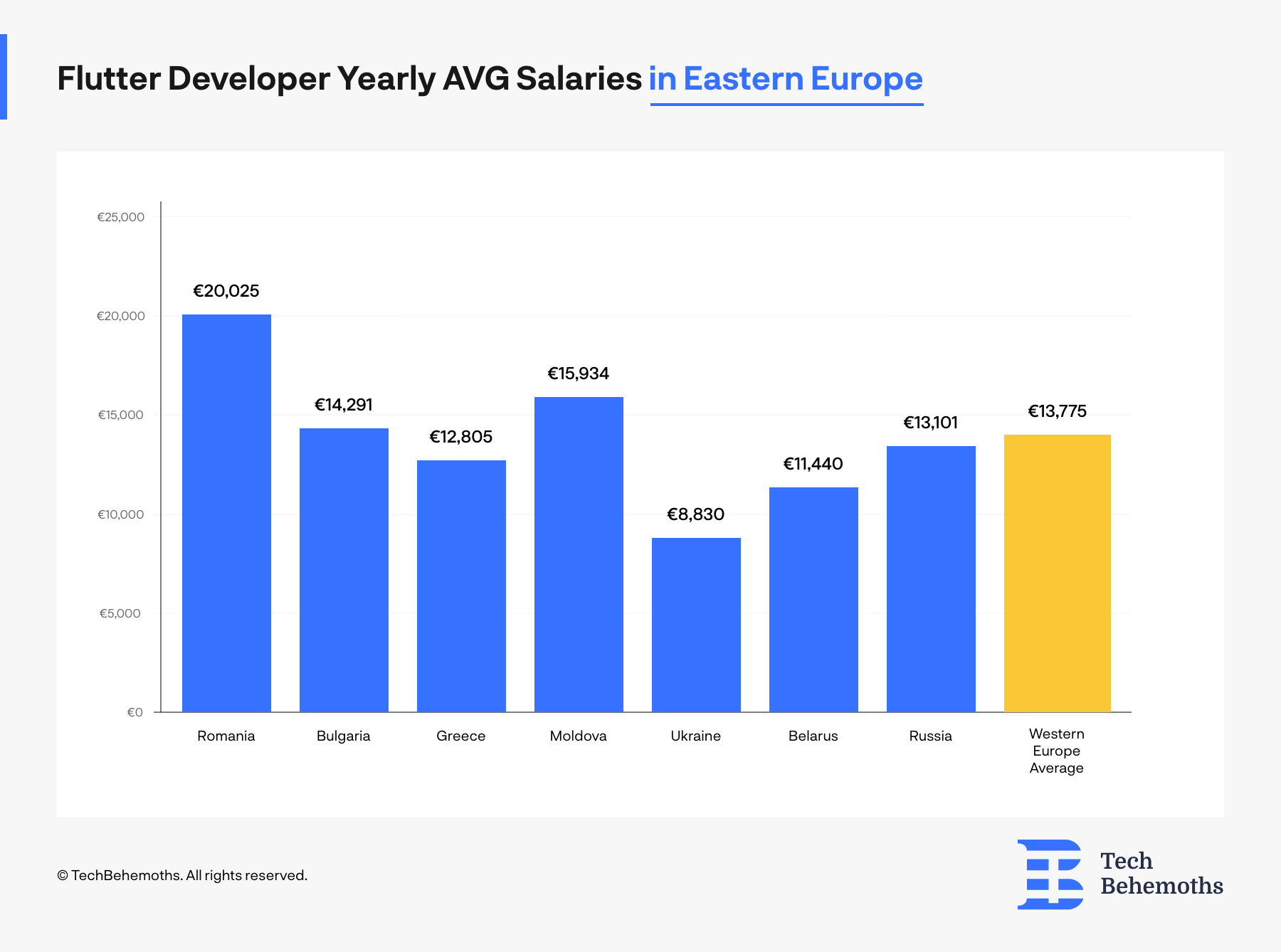 The average salary a Flutter developer earns in Eastern European countries is the lowest among all regions in Europe - only EUR 13,775/year. On the other hand, living costs, tech education, digital infrastructure, and IT capabilities are also among the lowest in Eastern Europe, so this pretty much explains why the wages are lower.

How Much Flutter Developers Earn In The Baltic Countries?

The first thing that comes to mind when I mention the Baltic countries is innovation, tech skills, and startups. And that’s because they have it and they’ve done it. Take a look at Estonia for example - an impressive number of fresh-born startups that are worthy to follow. Latvia and Lithuania are not too far behind either - according to OECD, their input to the R&D information industry is among the top 8 in the community.

With an advanced digital economy, and strong IT industry, companies coming from the Baltic countries earn good enough to pay among the best salaries in Europe for Flutter developers: 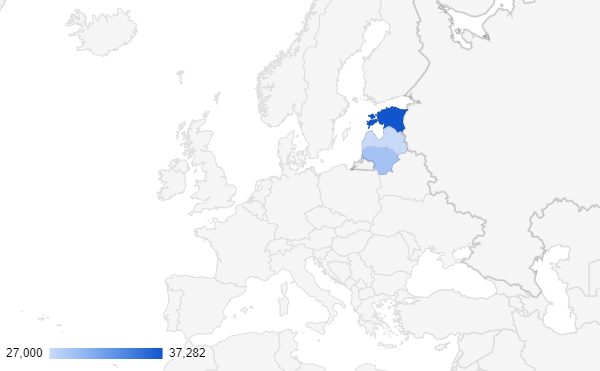 How Much Flutter Developers Earn In Scandinavia?

In Finland for example the average yearly salary of a Flutter Developer is EUR 41,062, while Swedish IT companies pay the same professionals the equivalent of EUR58,213. However, the leaders are Norwegian IT companies.  Flutter developers in Norway earn almost as in Denmark or Germany - EUR 59,472. 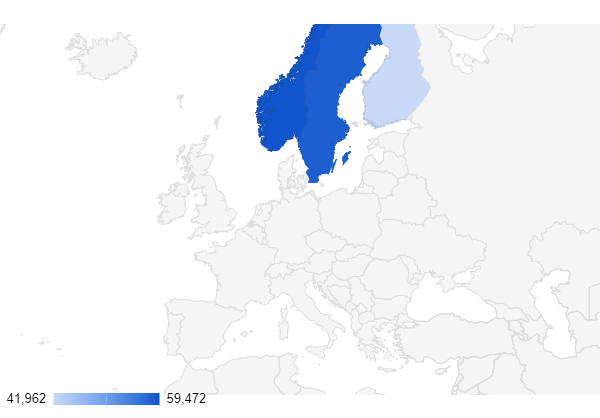 Since the region includes only 3 countries, and companies located there pay higher salaries compared to any other region overall, the average salary of a Flutter developer in Scandinavia is EUR 53,216 or its equivalent.

This makes Scandinavian salaries for Flutter developers the best in Europe. 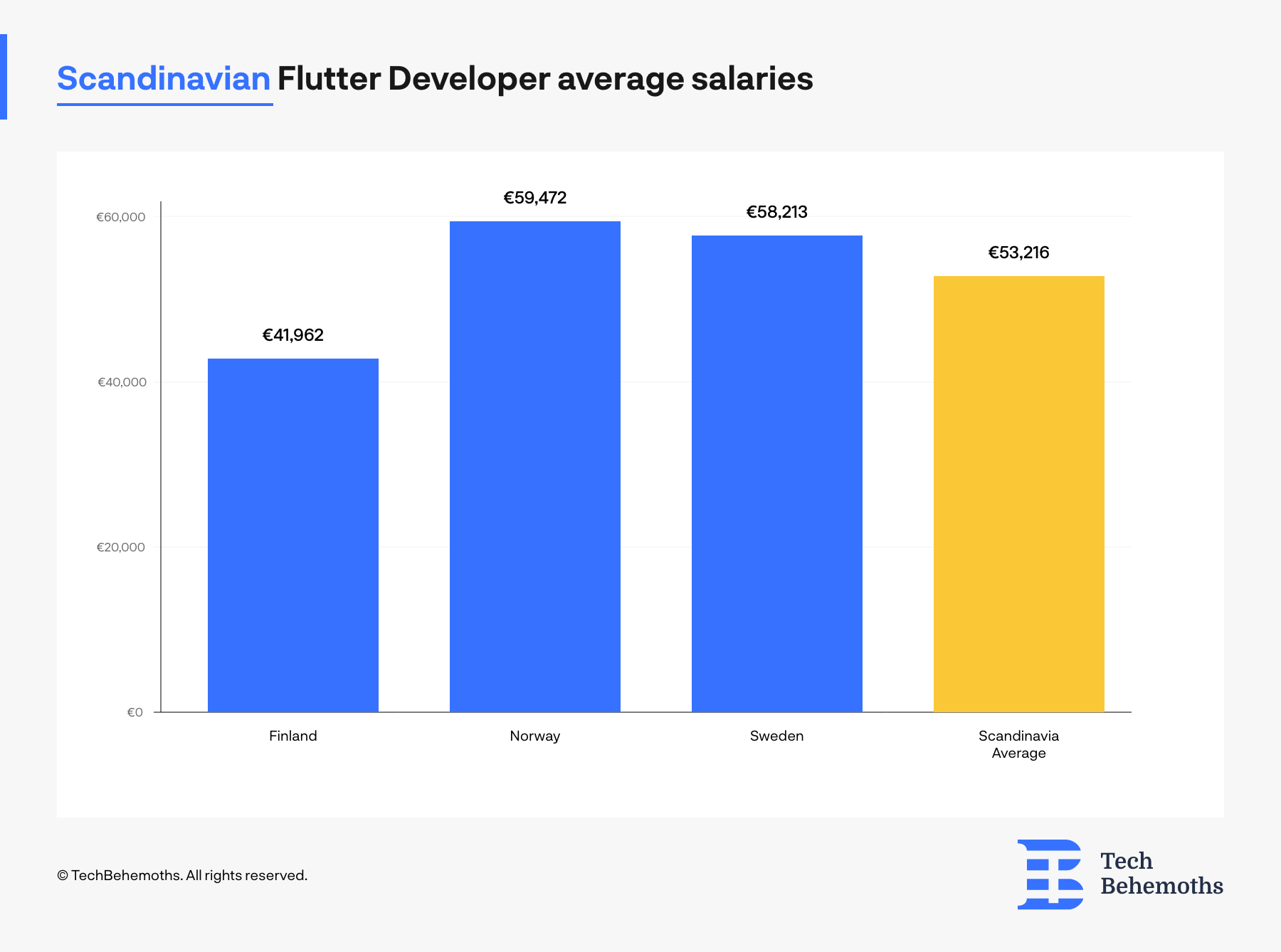 To sum up, here are several key findings of Flutter Developer salaries across Europe: 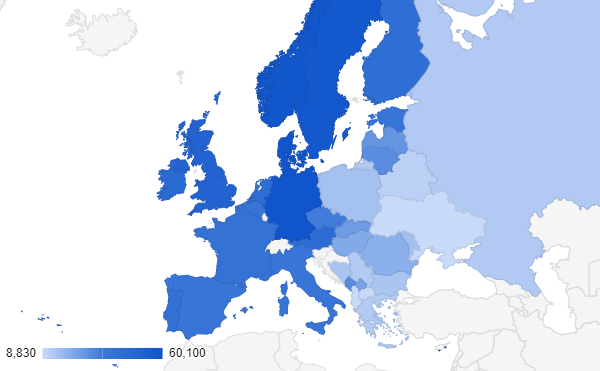