How Much do React Developers Earn in the Netherlands? 2022 Overview

Wages are a sensitive topic to talk about, but at the same time, they are one of the most important indicators for a job or even a career. And, a very popular job in the 21st century is the one of being a  React developer. This research is exactly about developer wages in the Netherlands - a leading tech hub in Europe.

Let’s start with the fact that frameworks supported by tech giants are more popular than others. In our case React as a Facebook-developed and promoted framework enjoys a high demand on the market, even if it’s 8 years old. Thus,  React developers tend to get more working hours.

There Is No Fixed Salary

When calculating the average salary for a React developer in the Netherlands, just like in any other country it is extremely difficult to get a precise figure. The thing is that it depends much on experience, region, company, target market, and even project type.

In some cases, it may happen that a junior React developer from Amsterdam is paid better than a middle React developer from other regions of the same country.
Or, even more, according to our data small tech companies of up to nine people have a considerably higher hourly rate than companies with up to 50 people. And this happens not only in the Netherlands but is a global trend.

Relevant Sources About React Developer Salary In The Netherlands

Of course, our research includes and other resources where the average salary for this job is calculated based on several indicators.  The data was collected from the most reliable sources and is calculated only for the Netherlands.

All three sources say that the wages are as of 2021, and probably the only difference between Glassdoor and the others is net wage vs gross wage. Nonetheless, the numbers look pretty high and we will compare them later with other developers from the same country.

Freelancing As a React Developer - Netherlands

Yet, thanks to Freelance platforms, we can track information about all three categories and of course their wages. But before sharing the figures we must say that Freelancing is relatively comparable with salary-based jobs. Charging per hour may vary from case to case due to a huge number of factors:

These are only a few wage indicators that have a big impact on the money a freelancer earns at the end of the month. So theoretically it is possible to work from the Maldives for a Dutch company on a React-based project but it’s already obvious how many things can take your money except taxes and fees.

Let’s take for example the pricing from Upwork. There are Dutch developers who charge $25/hour while others go up to $100/hour. The differences are the same indicators that we just mentioned above.

On Freelance - another freelance marketplace the difference is smaller in charging per hour on React - $30 - $50/hour. But this confirms once again the theory of how much a React freelancer can earn in the Netherlands.
Similar to Upwork and Freelance, PeoplePerHour hosts several job vacancies for React developers which indicates similar figures as on Upwork. $20/hour up to $100/hour. 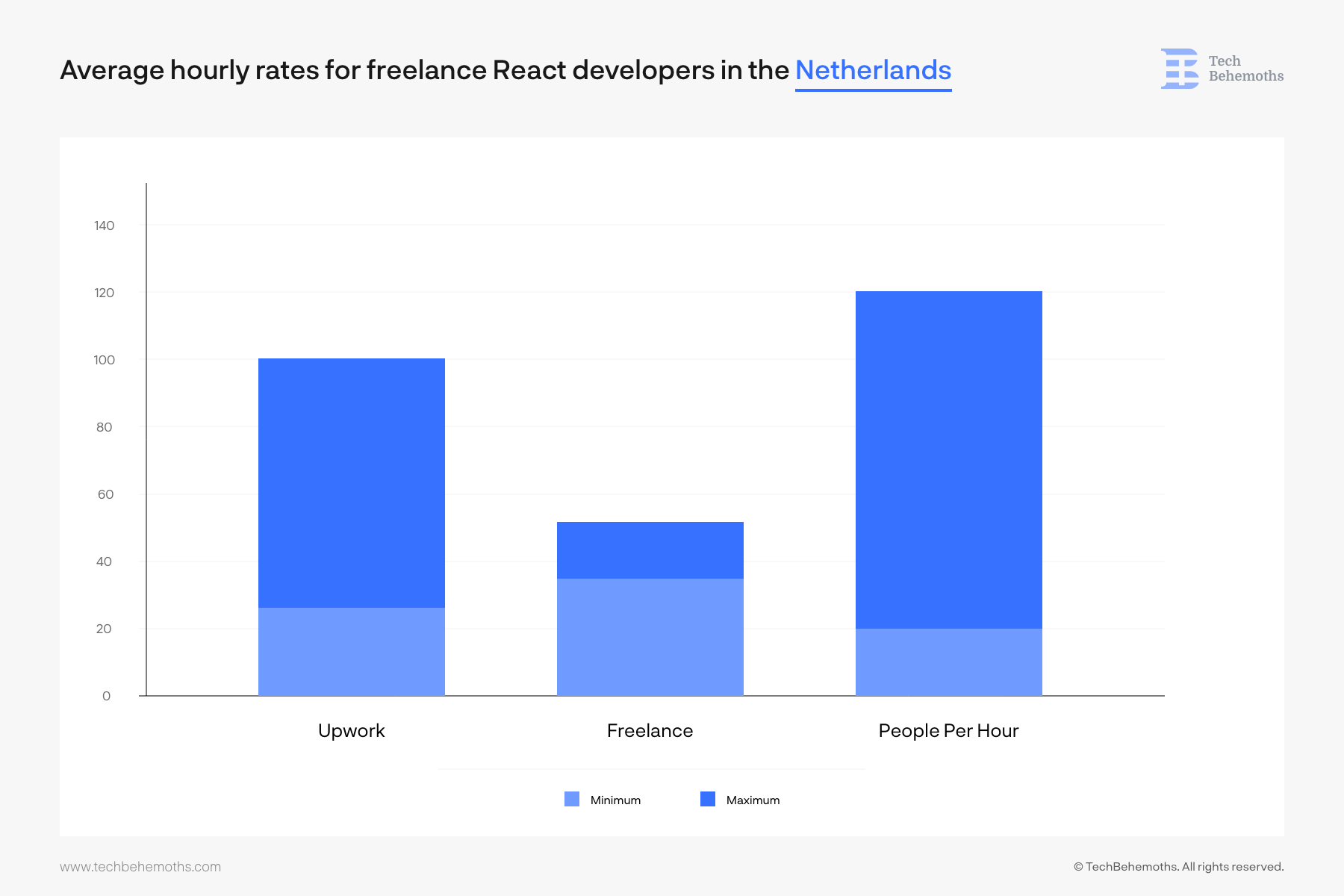 Also on this topic, as you may already notice there are three large freelance marketplaces that offer the opportunity to get hired for various projects. All these marketplaces are flexible when it comes to customizing your profile, and you can get the maximum of each if you handle your information well.

Moreover, being a freelancer is way more popular than 5 years ago, especially due to the pandemic. And hiring a freelancer does not assume the same risks as previously, since the marketplaces are regulating and moderating the entire process. Yet, the decision is up to you if you would choose a freelance career or not.

React vs Vue vs Angular Developer Income in the Netherlands

When it comes to comparing React with something, the most suitable and at the same time similar frameworks are Vue and Angular. Of course, we can compare React dev income also with WordPress, but it would be technically incorrect.

Now, taking into consideration the figures from our previous marketplaces and tools here is how much do all three developer types earn in the Netherlands:

Overall, in terms of salary, React is somewhere in the middle, between Vue and Angular, but it’s the same on how these services are demanded on the global market. While React is backed up by Facebook and Angular is backed up by Google, Vue has the smallest market share at the moment, but it is expected to grow in the next few years.

Below, is the graphic representation of the average salaries of React/Vue/Angular in the Netherlands 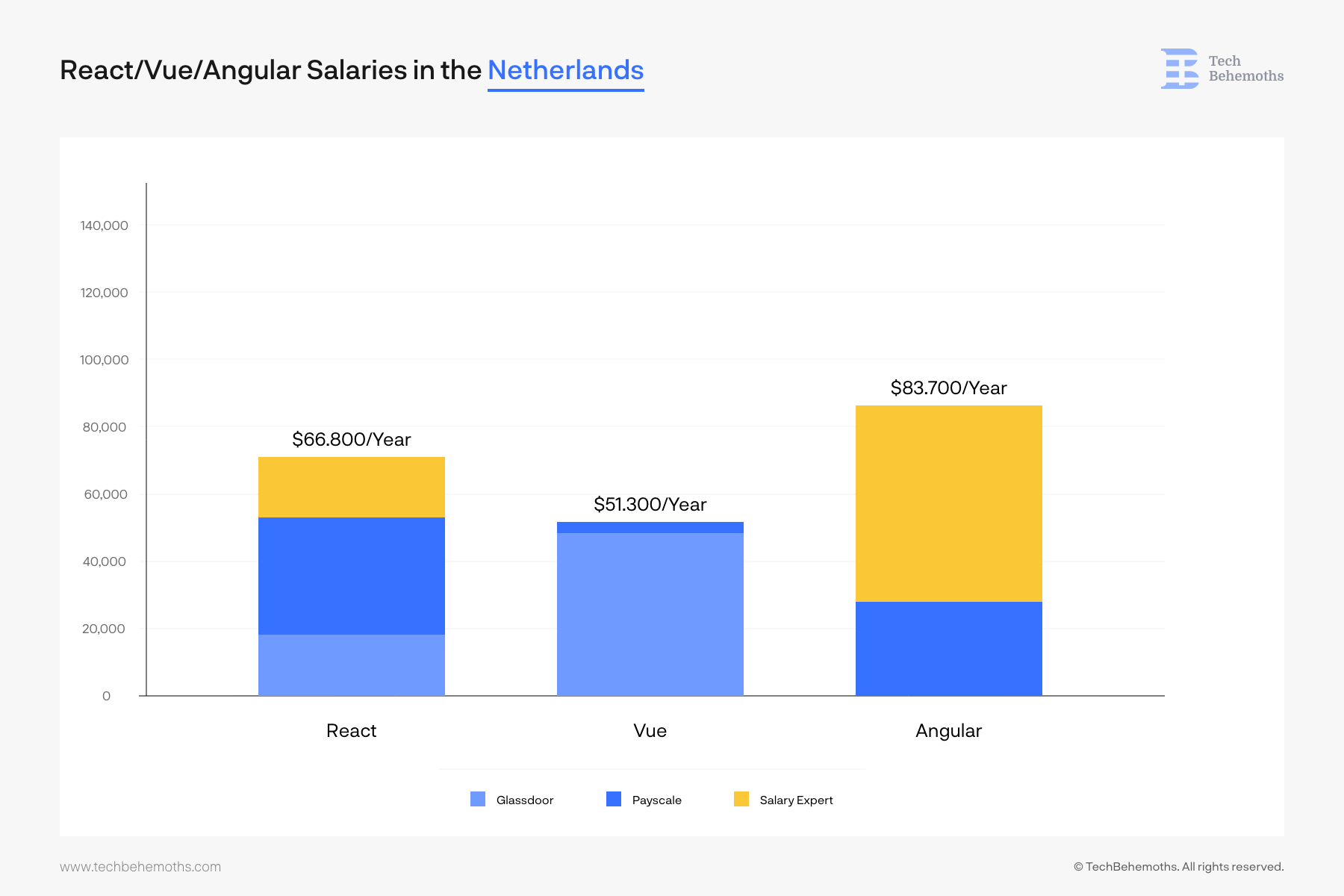 Probably this topic refers to all types of developers, not only to the React ones, however, there is a thing or two that is specific for this market.

4 signs of a strong IT company

How Profitable is a Digital Marketing Agency

What are the 5 main risks that IT businesses face?