Hiring Laravel Developers In Poland: How Much It Costs

Laravel has become one of the most popular web development frameworks in the recent 5 years and represents now a modern solution for medium and large websites. One of Laravel’s biggest advantages compared to other frameworks is optimization. Websites built on/with Laravel have a lower loading speed, score better performance results, accessibility, and best practices in benchmarks such as Google Lighthouse.

As it became a trend, developers from most of the European countries have adopted and are building websites with Laravel, and Poland is one of the EU leaders for the number of developers specializing in Laravel. If 5  years ago websites built on Laravel were expensive and not many business owners could afford one, in 2021 it is one of the best solutions both as pricing and as a digital solution.  In this article, we will talk about how much do Polish web developers and IT companies charge for Laravel services, and why.

The prices for Laravel services, vary from one region to another, and based on data collected from TechBehemoths, we identified the top 3 Polish cities with the largest number of Laravel web developers and IT companies: 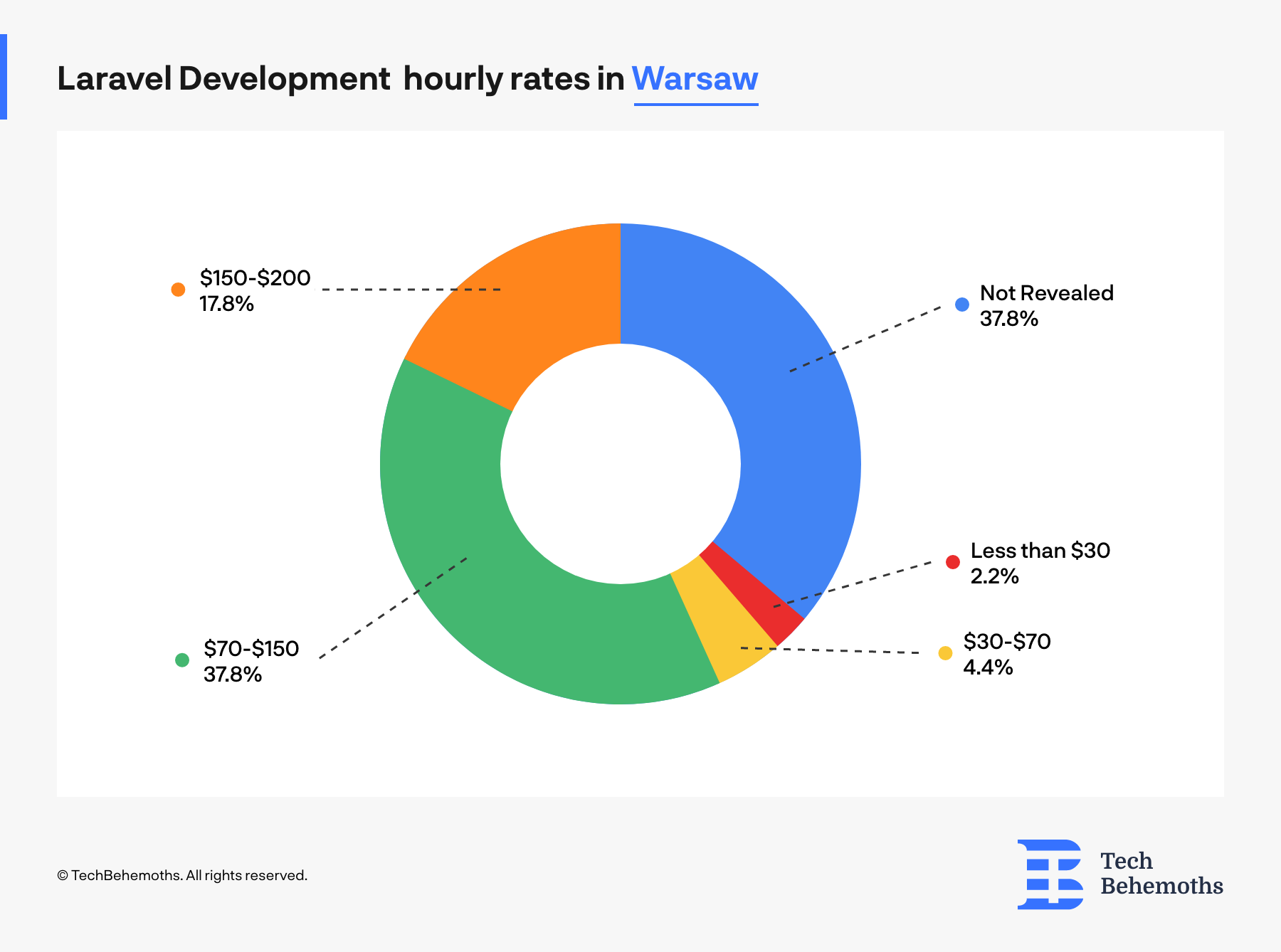 To conclude, the average cost of Laravel services in Warsaw, based on 24 IT companies is $120/hour. Even if the costs are higher than expected in one of Europe’s cheapest IT destinations, there is a high probability that all services are performed in a professional way.

According to TechBehemoths, Poznan is the second-largest city of companies by the number of IT companies specialized in Laravel. At the same time, Poznan is probably the Polish city where you can get the best price for Laravel services.

The cheapest price you can get in Poznan for Laravel services is somewhere between $30-70/hour. 8.7% of all companies declared this price and 4.1%. There are also companies that did not disclose their hourly rate for this service - 17.5%. 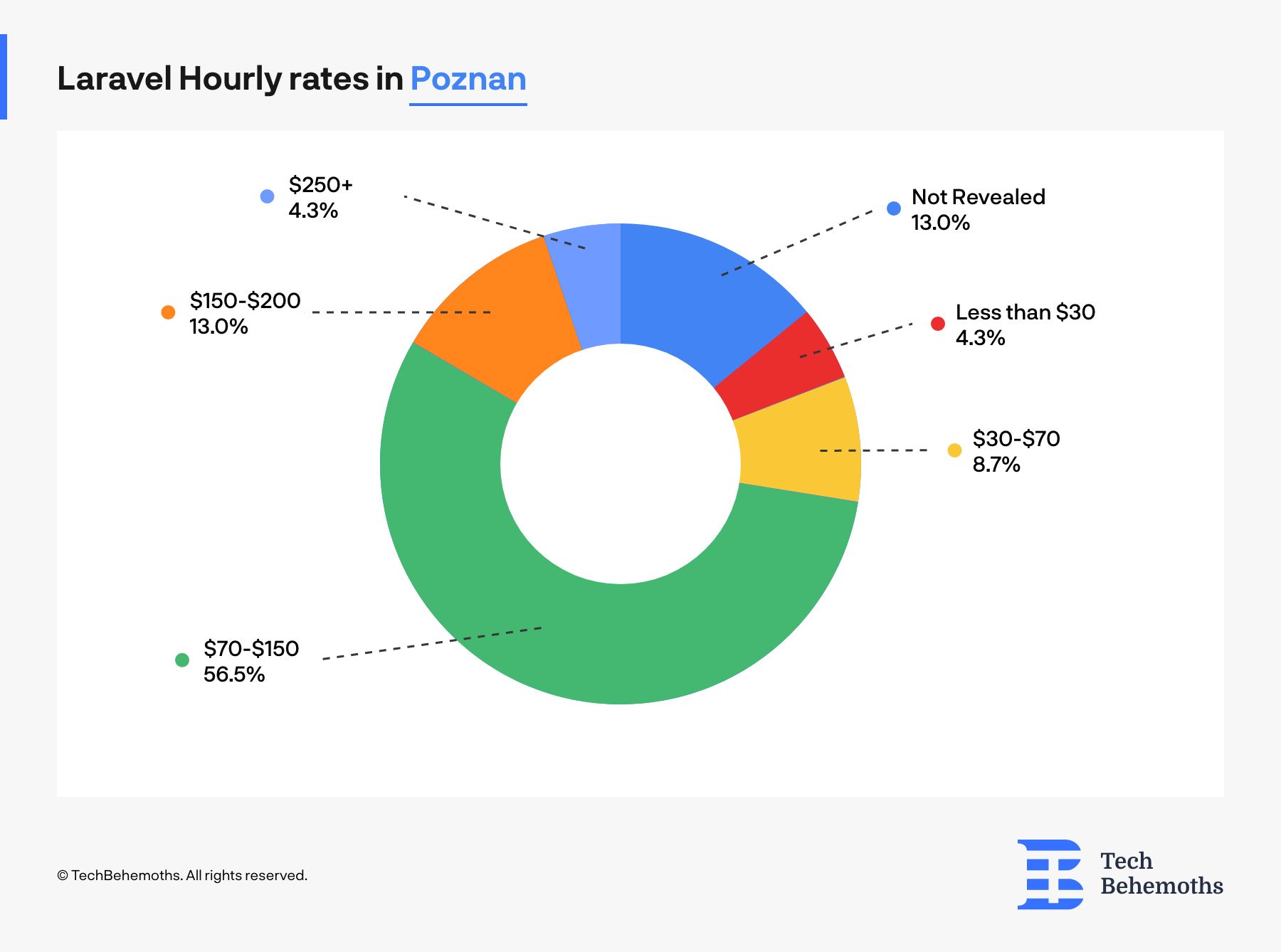 Krakow is somewhere in the middle when it comes to hourly rates for Laravel. According to TechBehemoths data, the average hourly rate for Laravel in Krakow is $108. This is between Warsaw and Poznan. At the same time, Krakow is the third-largest city by the number of IT companies specializing in Laravel services, so there are plenty of companies that can help you with building a website with Laravel.

Here is how the prices are segmented:

While 61.8% of all Laravel IT companies from Krakow have an hourly rate between $70-150, the rest of the pricing spectrum  is segmented differently:

Also, 8.8% of all IT companies and web agencies from Krakow did not disclose their pricing for laravel development 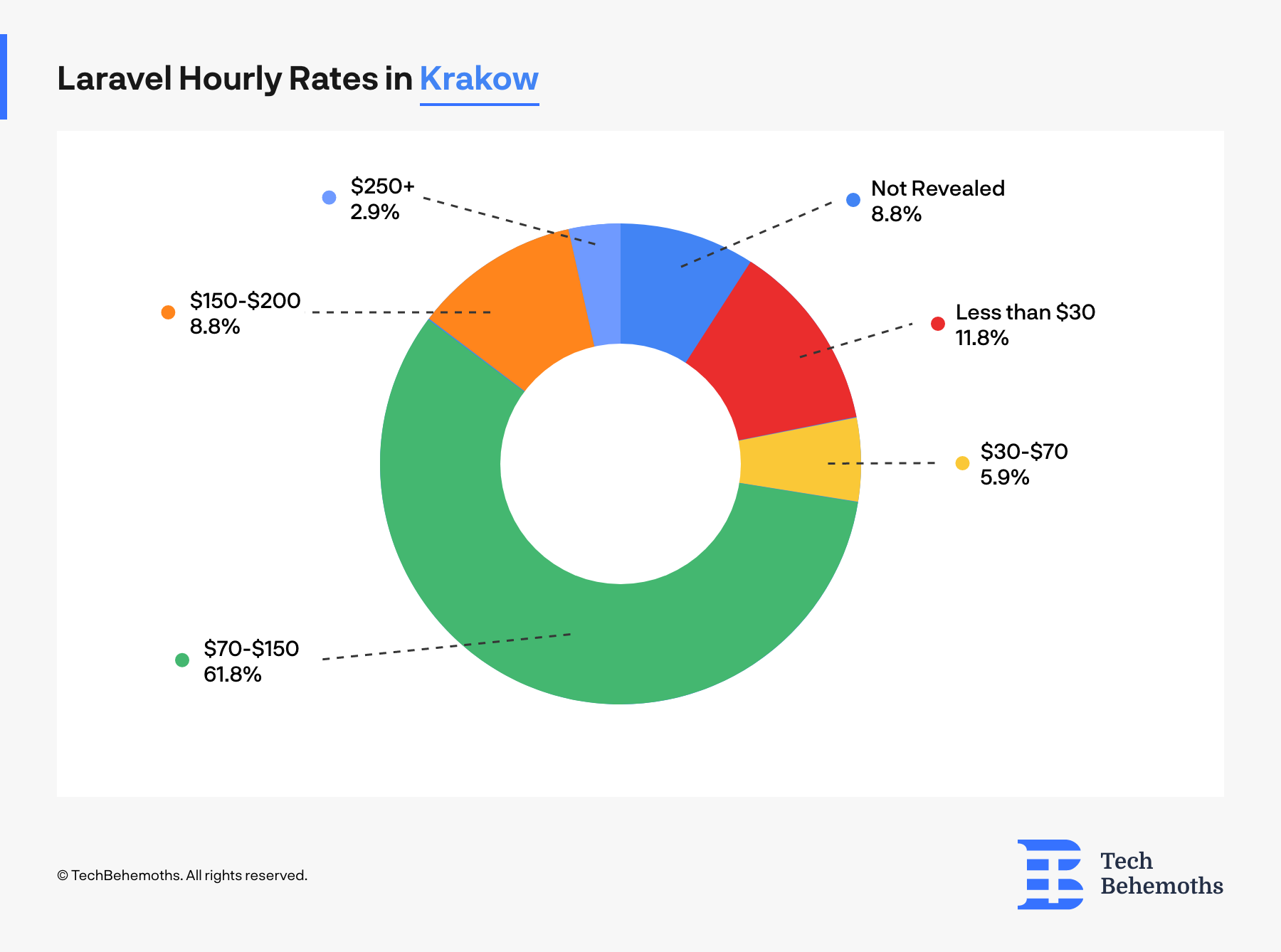 Even if the prices are higher than expected, Poland remains one of the most attractive destinations for IT service seekers. At the same time, the larger the city - the higher the price for services, no matter if it’s related to IT or not.

With all these, the average hourly rate for Laravel IT services is $105, and I wouldn’t say you couldn’t find cheaper in the region or in Europe, but in the end, what counts most is the quality. Also, the included price does not assume only Laravel services and that’s it - but also a series of other integrated services, plus VAT.

Do you earn more than a Laravel developer?