The average salary of a BI  Analyst in Malta is tracked and noted by several sources specialized in this field. However, each of these sources declares different salaries for the same job post. In this research, we will analyze and compare how well BI Analysts earn in Malta.

Average Salary of a Business Intelligence (BI) Analyst in Malta

While doing the research we covered three major sources specialized in salary expertise:

According to the first source, a professional that works as a Business Intelligence Analyst in Malta earns on average  €30,521 per year. The second source mentions that the average salary for the same position in Malta is  €47,172/year. The highest average salary declared by one of the researched salary tools is €56,700/year and belongs to SalayExplorer. The difference is caused by the fact that PayScale calculates the net yearly wage for BI Analysts in Malta, while the rest of the two sources share information about gross salary for the same position. 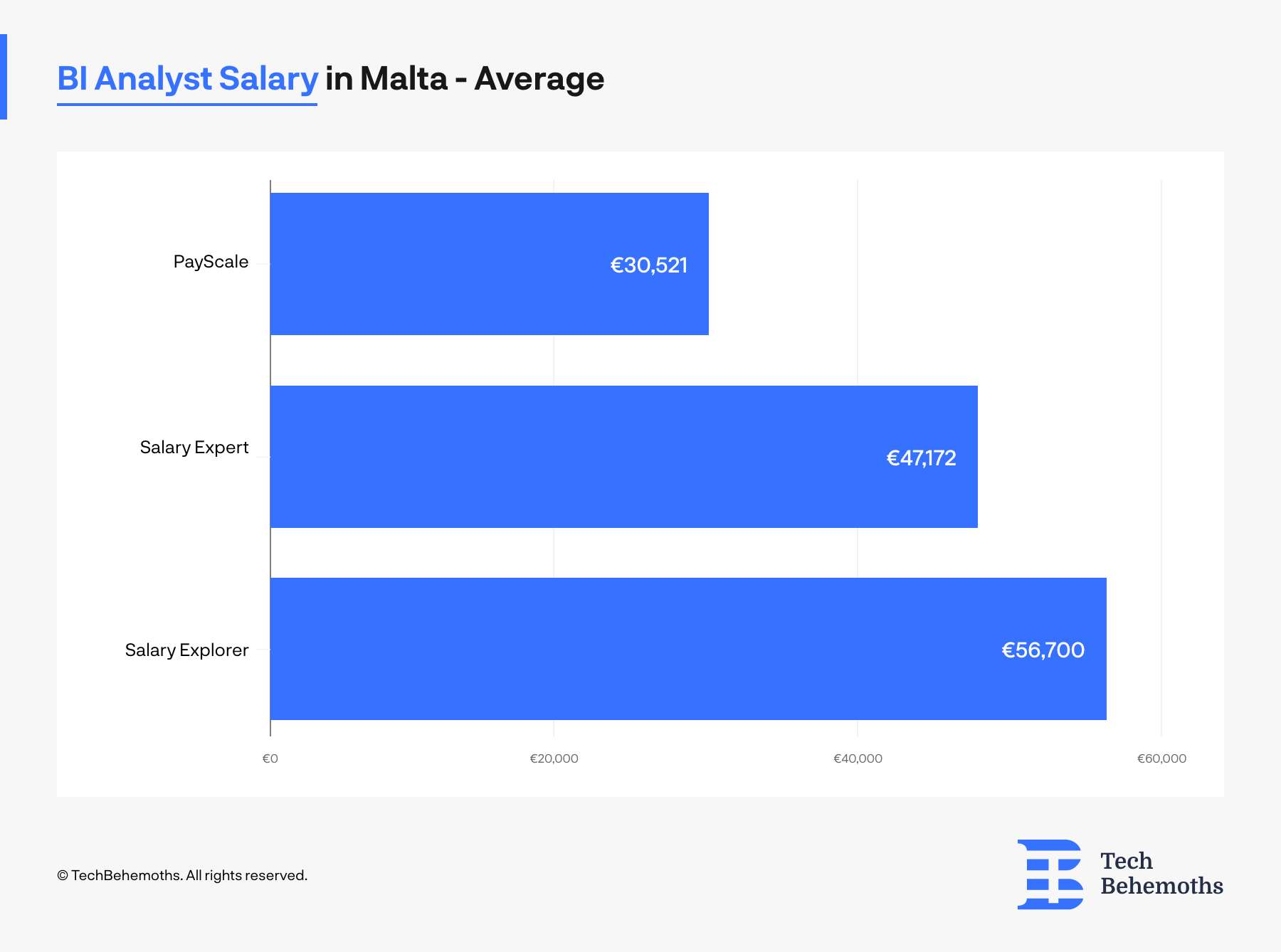 An entry-level Business Intelligence Analyst in Malta could start with a yearly salary between €29,500 - €33,250, before taxes. A junior BI Analyst is considered a professional with 2 or fewer years of experience in this field.

Out of all three sources, PayScale doesn’t provide any information on the minimum salary of a Business Analyst in Malta, while SalaryExpert and SalaryExplorer share the following details about entry-level salaries for this job title: 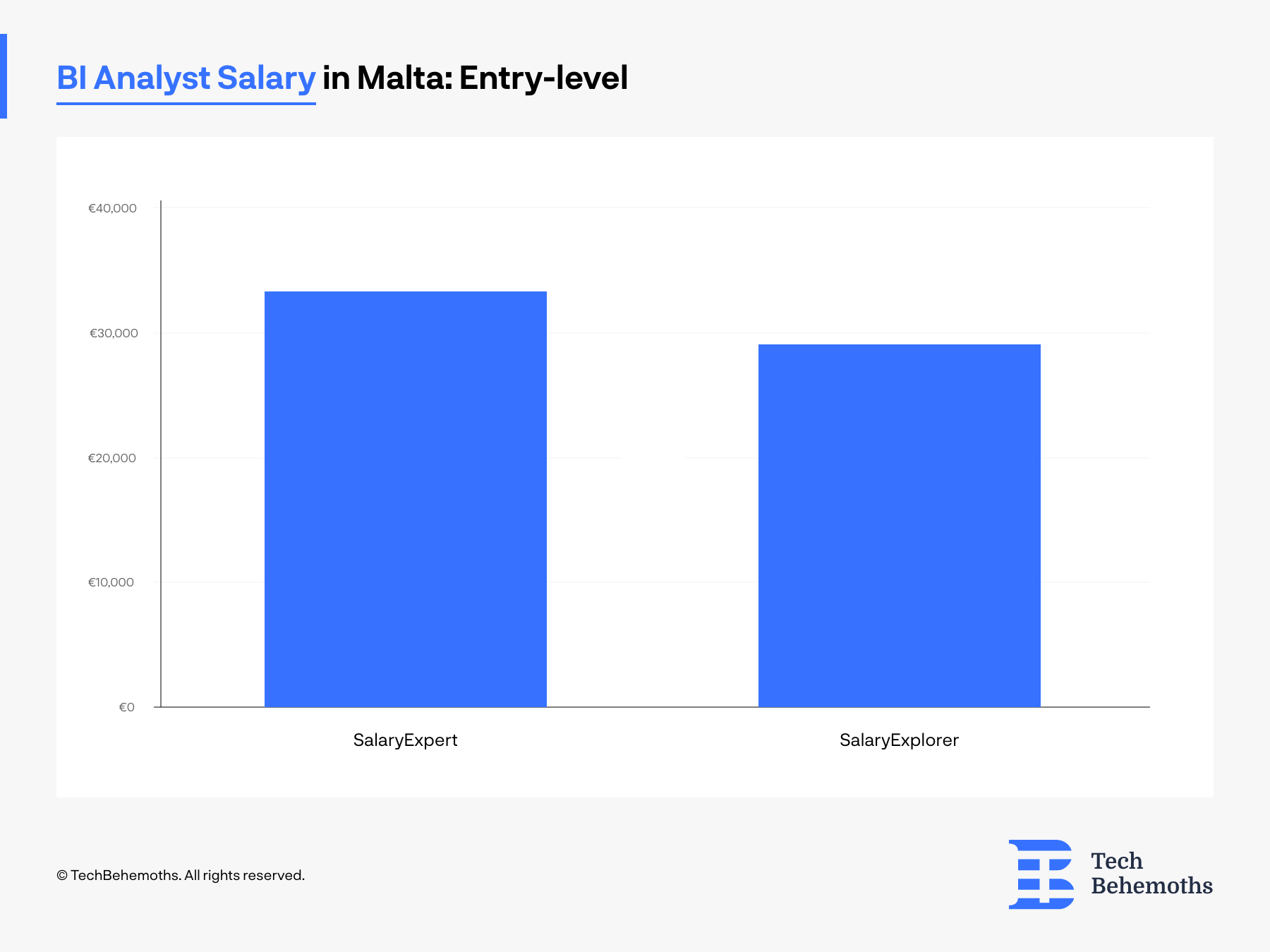 The best-paid BI Analysts in Malta are senior-level professionals. For this title, PayScale doesn’t provide any salary information. On the other hand, SalaryExplorer and SalaryExpert remain the core resources for this information - just like in the previous case.  This time the difference is higher as the two platforms rely on different types of data.

The difference between SalaryExpert and SalaryExplorer data is that the first one calculates the average salary of the best-paid BI Analysts in Malta, while the second resource only declares the highest-known salary for the same job title. Also, there are significant differences between the needed experience for acquiring the title of Senior BI Analyst: 8 Years vs 20+ Years. 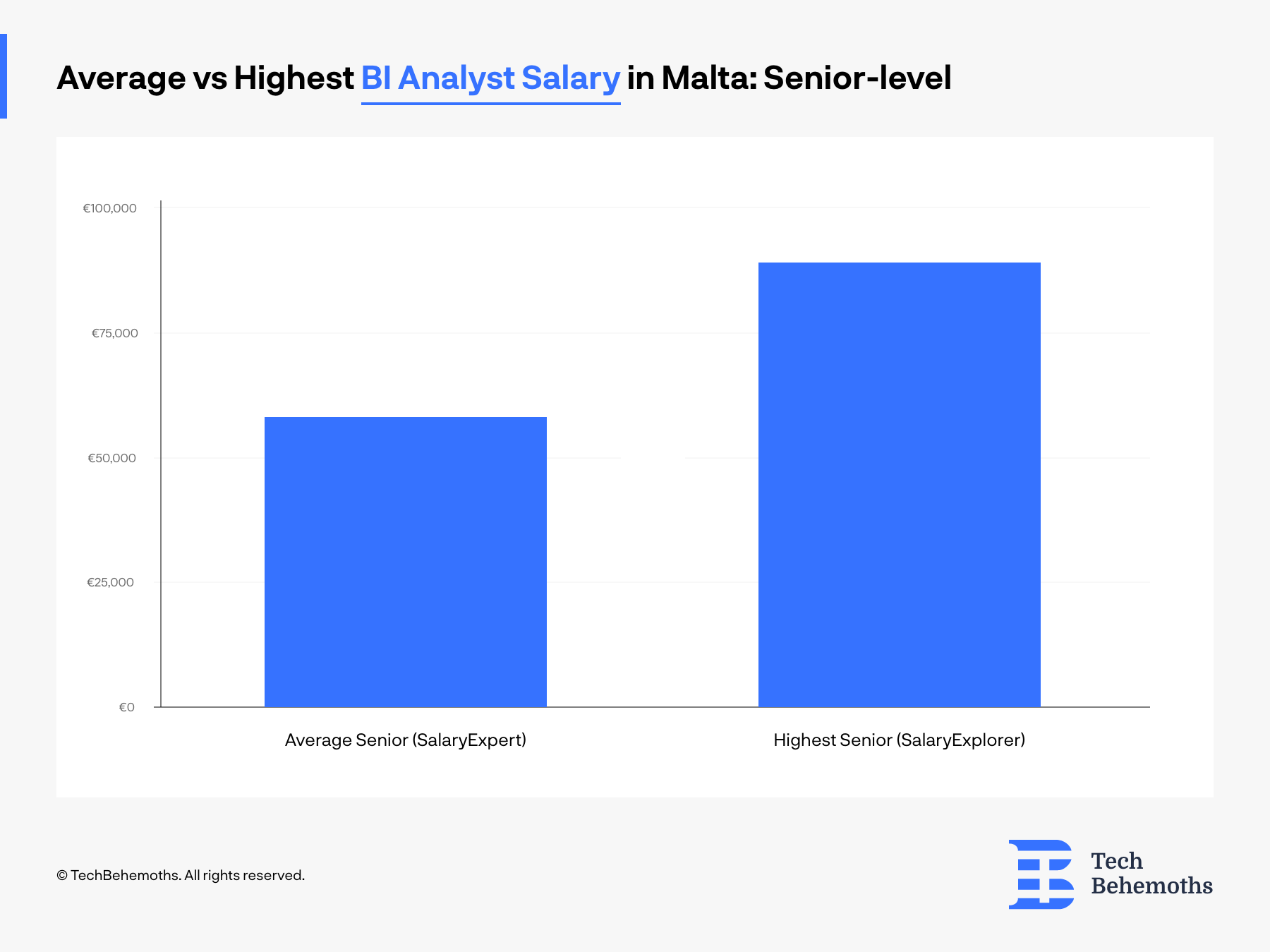 Considering the constant growth of the entire IT industry worldwide, and the continuous need of new BI Analysts within the same industry, the wage is expected to grow as well within the next few years. SalaryExpert data estimates a 10% salary increase for these specialists in Malta for the next 5 years and by 2026 we could expect an average of €52,086/year. Also, it is important to note that it’s not the fastest nor the highest salary growth in the sector. Education and Skills for a Business Intelligence Job

Skill requirements and education for any professional, including for BI Analysts are largely the same and do depend on location. Based on a SalaryExpert analysis, the set of educational qualifications for this job are as follows: 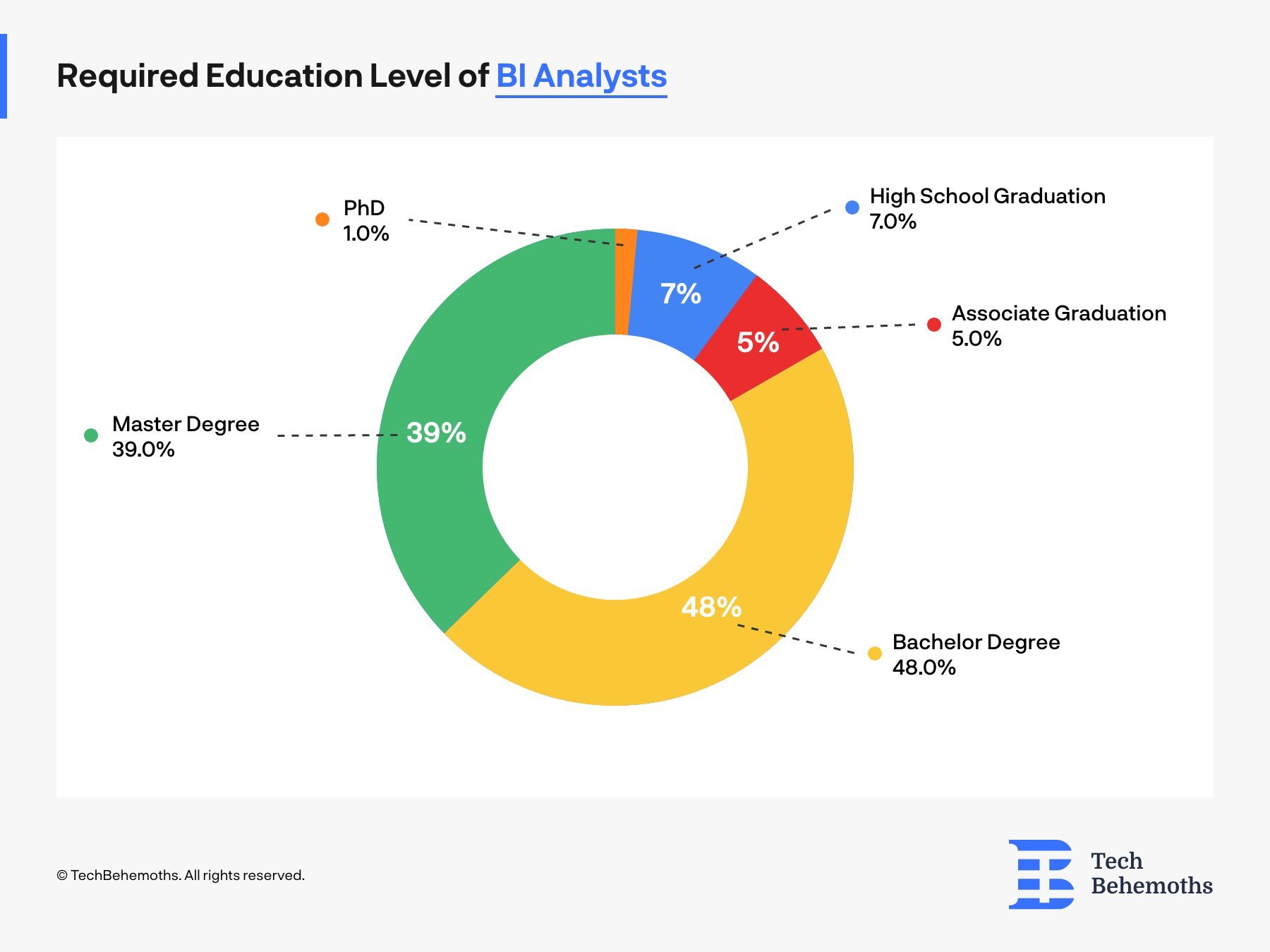 The skill requirements for the position of BI Analyst are distributed between 5 major assets according to SalaryExpert data. The analysis shows that 51% of companies require Advice management - a skill where professionals have to select and provide the best options for a decision related to business development. Knowledge and ability to work with SQL databases is the second most important skill for BI Analysts and 16% of all companies hiring for this position demand it.

Knowledge of Tableau software - a reputable analysis tool in the Business Intelligence industry, is the 3rd most demanded ability by companies hiring for the same position. 6% of companies will likely ask you about it during the interview. At the same time, companies may also require Project Management and Data Analysis skills when applying for this job. 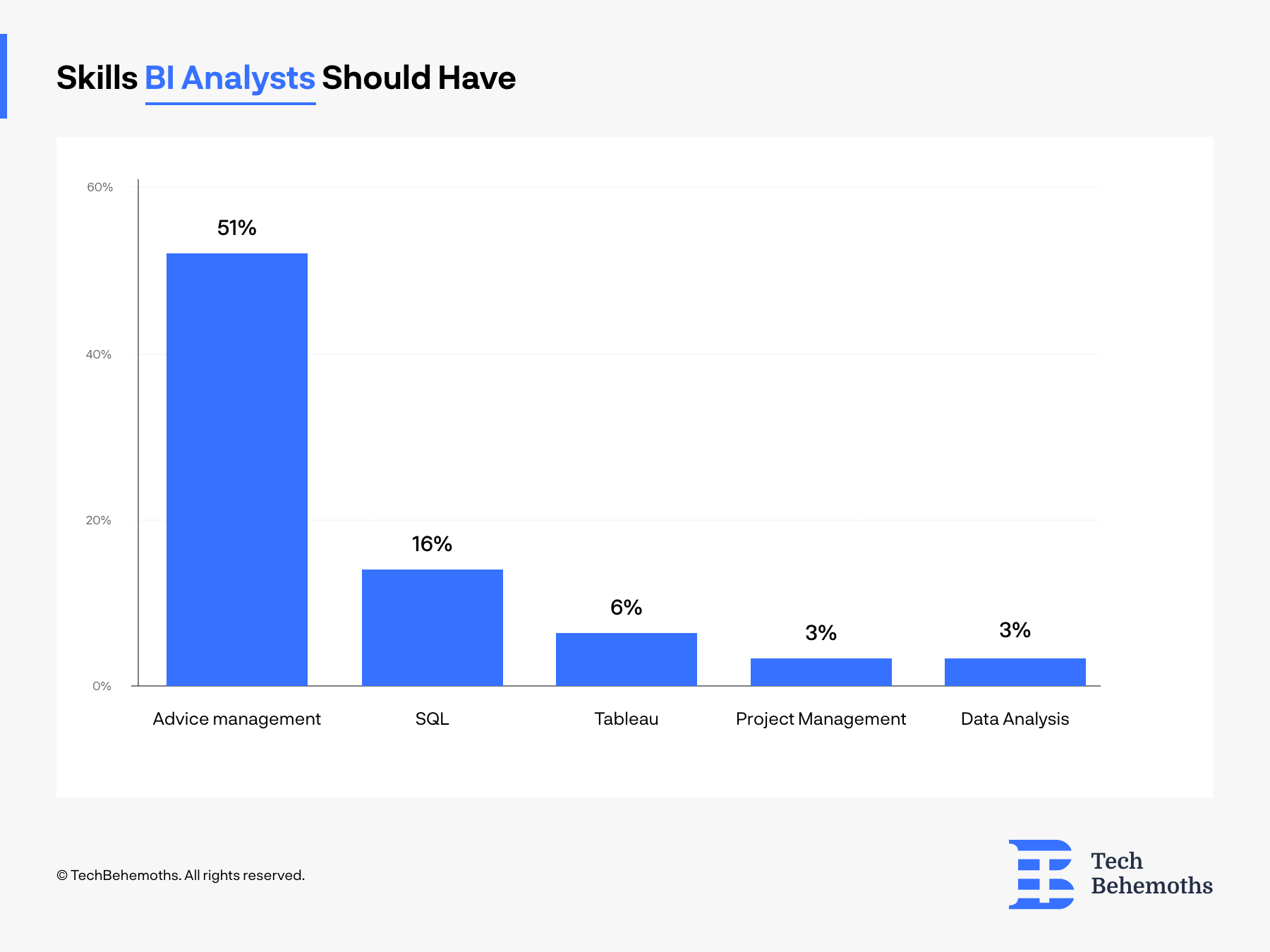 Most of the companies hiring a BI Analyst in Malta are following the global trends for this position since the country is not a major player in the international market. That’s why everything from wages to skills depends on how things move in Europe, North America, and Asia - leading IT markets as of 2021.

On the other hand, based on the above-mentioned estimations, the salaries for Business Intelligence Analysts will grow in the next 5 years, and there is a possibility to have new skill requirements for this job position in the future as the list of tools and technologies BI Analysts should work with will possibly grow.

If you are interested in finding companies providing Business Intelligence services, you are welcome to discover them on TechBehemoths.

Is Malta a good place to work as a BI Analyst?