The novel coronavirus has totally changed the way people work leaving empty offices behind even in the largest tech hubs. The same thing is happening with California’s Silicon Valley and the entire state, roughly said where people are seeking a cheaper, greener, and taxless alternative to their previous workplaces. This is happening in addition to current restrictions and recommendations of remote work having people staying at home and doing their jobs out of the office.

But, the story of companies and employees leaving California has deeper roots than 2020, when the pandemic started. With tech giants like Google, Apple, Amazon, Microsoft, and Facebook having offices in the state, cities have become crowded, and extremely polluted which leads to a lower satisfaction level of the masses. Moreover, new companies and startups are also building new offices and relocating in California, and the trends continued up to 2019, but at slower paces.
According to Statista, the number of new tech companies in California is the largest in the US, with more than ⅓ new companies compared to the next state - Florida. Texas is also not so far behind with 57K+ new companies registered in the state.

However, new businesses that come to California don’t have as many employees as tech giants, and thus, the number of workers is considered to be lower than in previous years.

The percentage of Californians moving at all, either within the state or out of it, has been steady since the end of 2014 at about 4% each quarter, according to the California Policy Lab. In the third quarter of 2020, statewide residential mobility was actually 9% lower than it was a year earlier. Over time, the number of people leaving California tends to track the number of people entering the state, but that pattern shifted in the fourth quarter of 2020 when 267,000 people (out of a total population of 39.5 million) left the state and only 128,000 entered.

This means that there is strong competition between states in attracting tech businesses and entrepreneurs overall. The trend becomes visible especially in local and even national media, sharing news about reasons why companies are leaving California, and reasons why another state (especially Texas and Florida) are more attractive destinations for businesses compared to California. 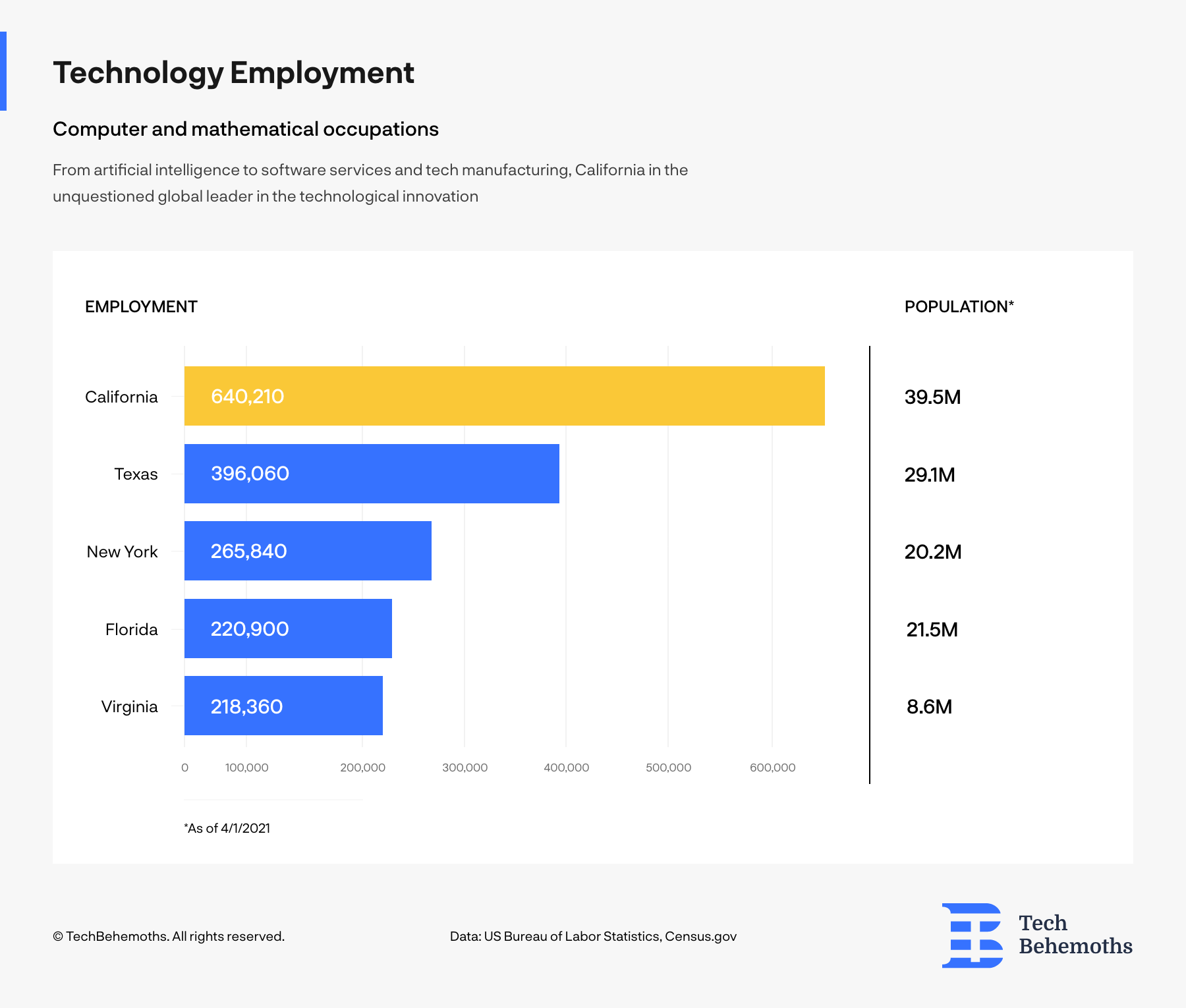 The employment rate in the IT industry continues to be the highest in California followed by Texas and New York, figures that reaffirm the state’s leading position in technology, employment, and entrepreneurship.

In addition, the latest data from California Policy Lab puts an end to the fight between states and mentions that there is no exodus as a matter of fact. The only thing that has been happening, and created the image of the exodus was the San Francisco migration rates, and there is no one to blame - the city is indeed crowded taking into account surface and population growth. 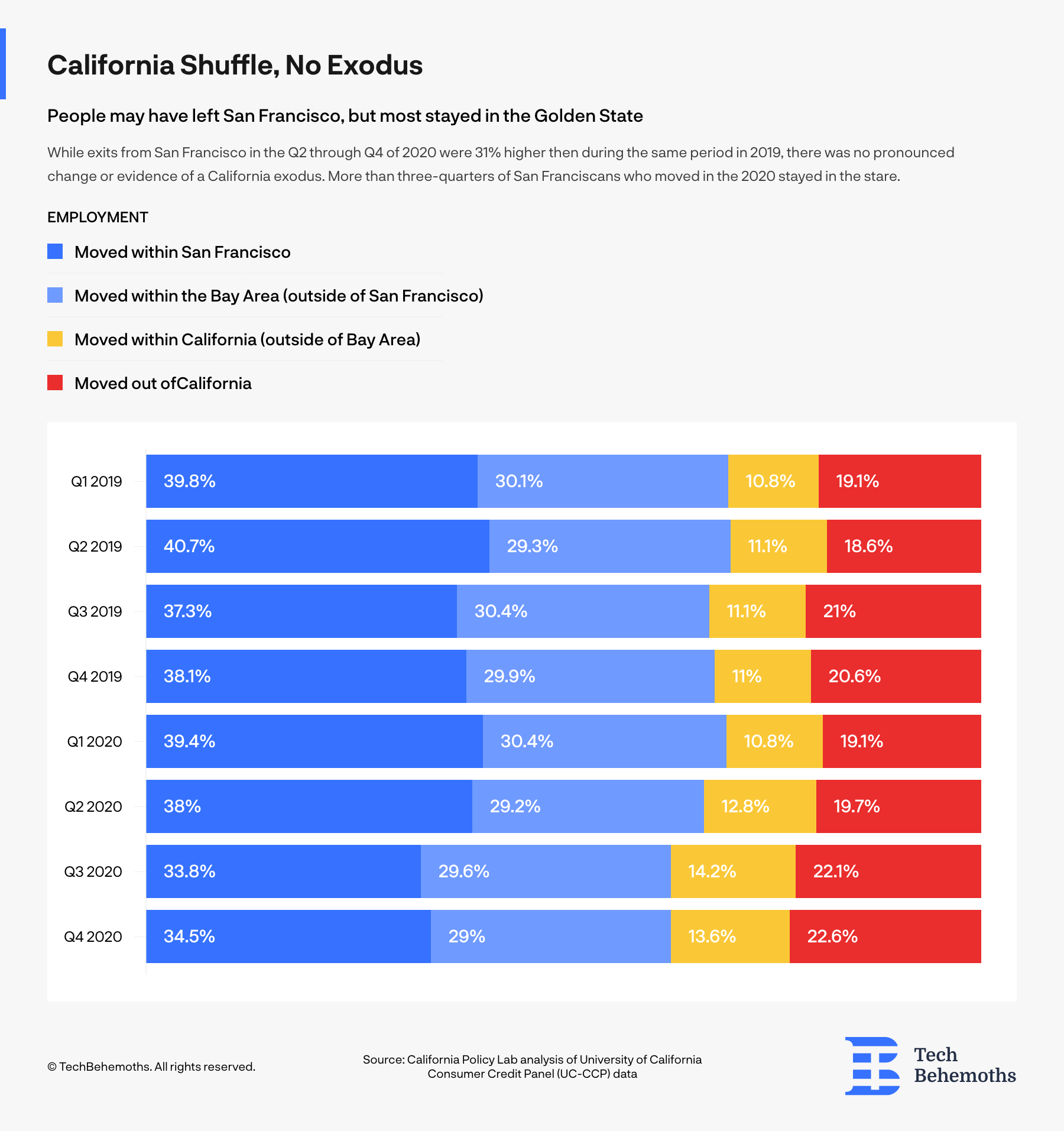 Coming back to the current situation, with the pandemic and several tech companies that look like are leaving California, we can definitely say that there are solid reasons why companies could move out. Let’s start with the fact that all tech companies choose California due to its proximity to good higher education, human resources, and mild climate. But that happened a while ago when nowadays tech giants were on their way to change the entire industry.

Now, California has changed significantly and provides more reasons for companies to leave than a while back. Among those very reasons, the most important ones are:

In addition to these, there are many others that tech companies consider when choosing their operational base, market, and location somewhere in the US. However, each state in the US is good at something and bad at something, and in the end, it’s all about priorities.

Here is a list of companies which intend to leave California or have already left for other states.

Saying that tech companies, and businesses, in general, are leaving California is partially true. With the pros and cons, but also with the number on their side, California is still the incontestable leader in technology, IT, and digital environments.

How far it will be this way, depends much on how huge tech companies are going to progress within their current location, and if there will appear a serious competitor for the Californian state in the near future. Just like staying in one location, moving out doesn’t guarantee progress.

Either it's about California, Texas or any other US state or city, discover all US IT companies on TechBehemoths.

Will tech companies leave other states too?