What Tech Companies are Leaving Russia? Analyzing the Aftermath of Sanctions

The war in Ukraine comes with all types of casualties on both sides. When it comes to tech and IT - one of the most vital industries for any country in the 21st century, the consequences are extremely harsh. If the war caused Ukrainian companies to relocate themselves most of all in the EU, then for the Russian IT companies it becomes even more difficult to find any source of existence within their current borders. A quick and temporary  solution to escape from international sanctions, currency devaluation, and the uncertain political future regime in Russia is fleeing the country (to the only few countries left to accept Russian flights). And eventually finding the strenght and hope that they could resume or start everything from scratch in a new place.

Is Russia Facing a Brain Exodus?

Starting March 2022, the sanctions imposed by the Western countries on Russia started to damage the Russian economy and generated concerns on the local business scene whether the country can self-sustain its economic power. On the background of the war in Ukraine enhanced by financial restrictions a critical number of skilled tech specialists among others are doomed to flee the country in what the world calls a brain exodus.

But the countries that Russian “brains” could flee to are limited to Caucasus, Turkey, a part of Asia, Africa, and South America, while the western countries including the EU, the US, Canada, Australia, and Japan have closed their sky for Russian airline companies.

Right after the first days of the war, there is a constant flow of Russians at the borders with Finland - which is the best option for Russian tech companies and skilled professionals to seek a new start in this field. On the other hand, countries such as Armenia, the UAE, Sri Lanka, India, and China don’t give Russians the same chances for business development, especially in IT. That’s because these markets are either overwhelmed, too expensive, or perspectiveless for a new player that comes with roubles - the currency that at the moment of writing this, is cheaper than the paper itself.

Beside the intellectuals, influencers, opostions, a brain exodus has started as well. Perhaps this will aggravate in the near future, at least for a while, and it's only a matter of time before the Russian IT industry will transform from one of Russia’s economy pillar into a fragile and looking for opportunities industry. And this is almost certain despite a leave ban for Russian citizens, which will only slow down the economy and contribute to the chaos.

The number of tech companies that decide to either suspend or permanently leave the Russian market is growing each day. In addition to dozens of brands from fashion, retail, consumer electronics, and automotive industries that have already left the Russian market, those from the IT sector are also leaving massively or are being banned by Russian authorities. Here is the full list of tech companies that left Russia:

Consequence - Russians could no longer access the content available on Netflix. This includes some of the newest and most popular movies. Yet, VPN services are available and can be an alternative to avoid content restrictions. That’s because Netflix has suspended their services on the Russian territory, but didn’t ban Russian accounts.

The entire tech blockade will most probably result in catastrophic financial losses on all sides.

The first hit by the tech exodus will be Russian small and medium businesses that depend much on tech giants, even if their business doesn’t have too much related to tech.

The ban of western social media in Russia for example will hit hard on marketers and small businesses that relied on them as channels to create audiences, engage and interact with their customers.

Consumer electronics manufacturers that left the Russian market on the other hand provided until yesterday high-end technology that people were used to, and a world without Apple, Samsung, Sony, Microsoft, or Dell would be difficult to replace with cheaper-quality alternatives from Asia.

The Banking system in its turn suffered the hardest hit and would require time to set up and integrate alternatives to what is Visa, MasterCard, or American Express on the market. But it gets even more difficult to keep track of the cash flow without KPMG and PwC accounting services.

As mentioned above, the majority of Russian SMB rely on social media channels to advertise inside the country or abroad. According to Statcounter, the Russian social media VK has a market share of only 22.1% as of February 2022. At the same time Facebook, Twitter, Instagram, and YouTube get a total of 59.5% market share. 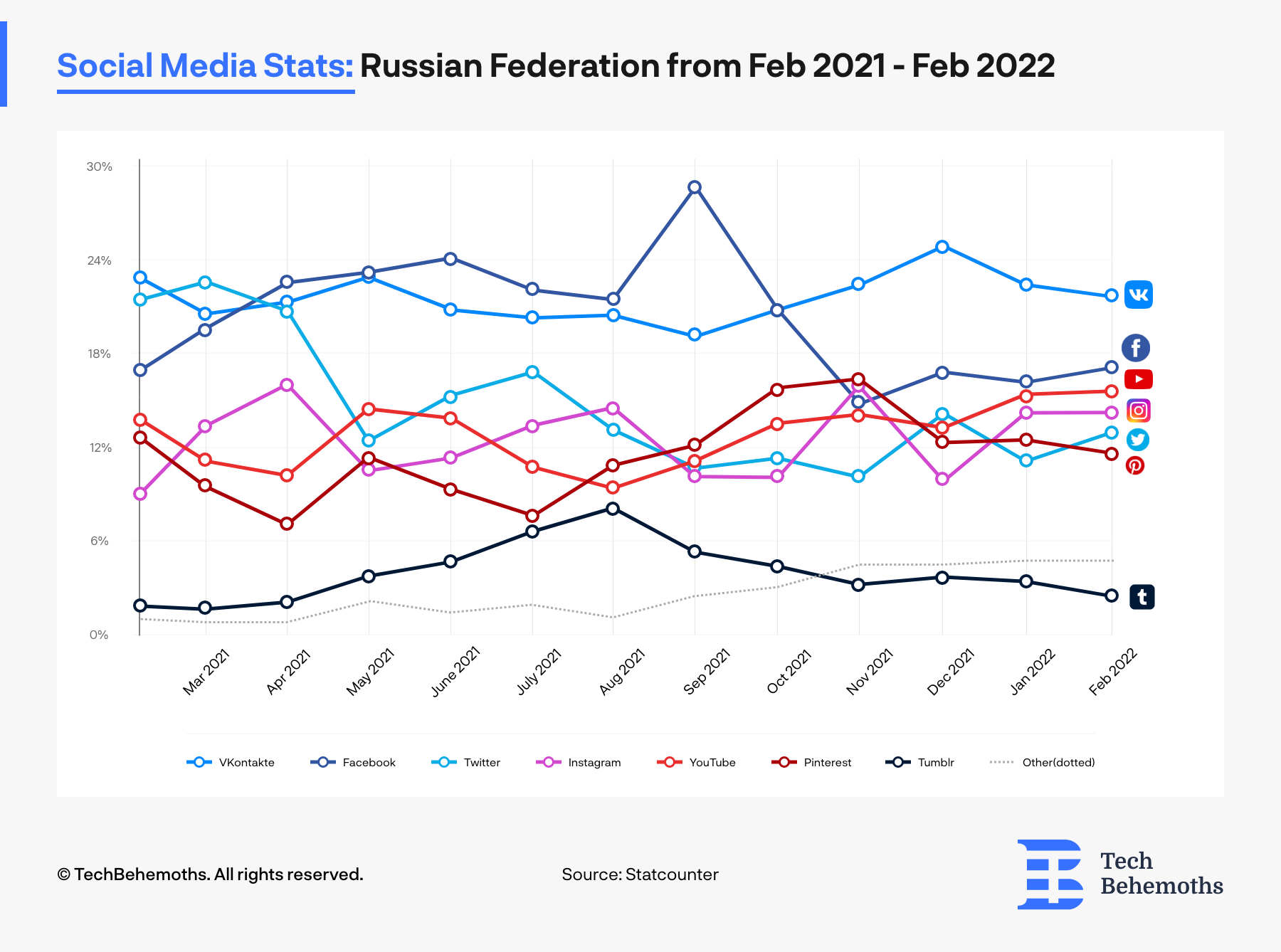 With almost 60% less of digital marketplaces, not so many businesses would be able to advertise for various yet evident reasons:

The Russian authorities are at least from this point of view placed between saving SMB or risk losing the power, considering the social media ban.

The only solution left for Russian SMB is to continue to use banned social media through Virtual Private Networks that now are even more important than ever in Russia.

Companies like Dell, Apple, Samsung announced that they will no longer supply the Russian market with their products. Apparently it will be easier to replace gadgets and devices from these companies, especially from the Chinese market.

The most affected segment is the Mobile Vendor Market where Apple and Samsung supply the Russian market and compete with sales of hundreds of millions of devices. 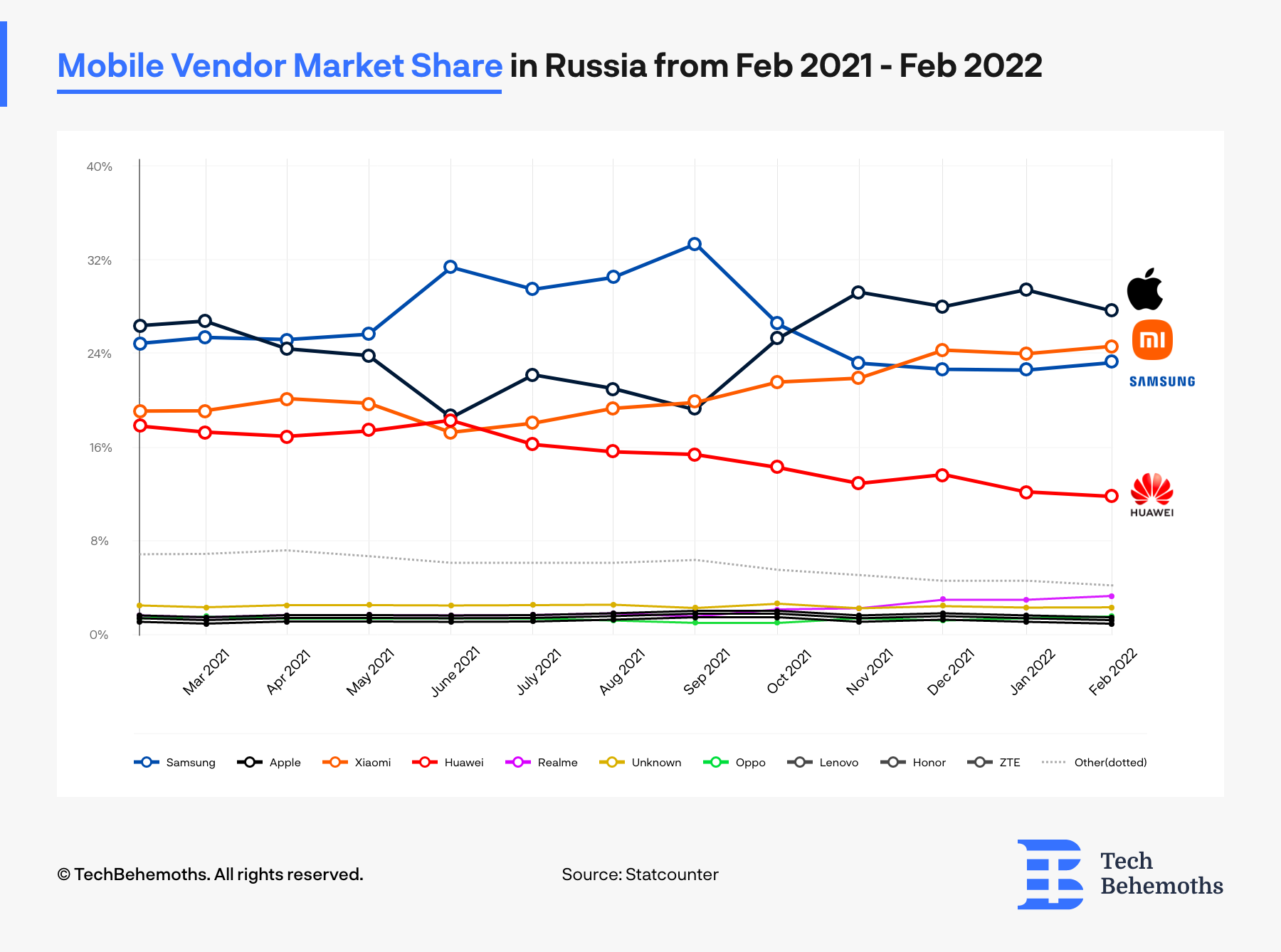 As of February 2022, Samsung and Apple together have a total market share of 45% on the Mobile Vendor Market in Russia. However, Xiaomi has a constant growth and Chinese manufacturers are able to replenish the hole left in the market left by the leaving competitors.

The first problem for SMBs comes with the price of Xiaomi and other Chinese smartphones which are cheaper than Samsung and Apple, and so the income of resellers and importers would be lower.

The second problem for Russian SMBs is related to purchase power, which becomes lower each day. The sales respectively could come short among the target audience.

The third problem for Russian SMBs is related to devices durability. If in the short run, Russians could afford to buy a cheaper device, in the long run, prices could go higher and the purchasing power become much lower.

The fourth problem is related to user preferences, especially in large metropolitan cities - Moscow and St. Petersburg. It is very difficult to predict if an iPhone or Samsung user would accept to buy another smartphone, that by the way will come with other operating systems compared to devices from the western market. Hence, the sales could fall even shorter.

American Express has an insignificant market share in the Russian market, so its retreat from Russia impacts most of all the amount of money held on these credit cards, rather than the number of transactions. The story is different for Visa and Mastercard. In 2020 only, 74% of all payment transactions in Russia were operated either from a Visa or Mastercard credit card. As of March 2022, Russians will be able to use these credit cards only inside of their country.

The impact of these measures on SMBs is huge and will generate long-term consequences.

No international payments through these operators will make P2P and B2B connections almost impossible to follow. In their turn, import and export of goods may be affected, and SMBs could fail in sustaining their stability or growth on the market.

In the long run, the main risk for Russian SMBs is to disappear from the national market either by going bankrupt or being nationalized as an extreme measure of the Russian authorities.

The impact of tech exodus in Russia will cause only a part of the national economy to malfunction. It will hit hard first of all SMBs, and citizens that are the financial backbone of the country. But at the same time, oligarchs and large Russian companies will pay much more as the sanctions are not limited to tech only. Countless brands, manufacturers, and providers from all industries took similar measures, and it will create consequences on both sides as sanctions hit on both sides.

Are these tech restrictions enough to stop the war?