How Much Smart Contract Developers Earn: Singapore vs Rest of The World

When it comes to salaries, blockchain developers are among the most highly paid professionals in the tech industry. The need for smart contract developers has grown dramatically over the last several years because of the growing interest in cryptocurrency and digital assets like Bitcoin, Ethereum, Ripple, etc. As a result, there has been an increase in the number of people entering this field, leading to fierce competition for jobs and higher compensation packages.

What is a Smart Contract?

Before we jump into the details of becoming a smart contract developer, let's first understand what a smart contract actually is. According to IBM, a smart contract is a computerized transaction between two parties that is executed without the involvement of a third party such as a bank or government. That makes it faster, cheaper, and less prone to fraud. Smart contracts are often used by financial institutions to execute payments automatically, eliminating the need for intermediaries. For example, banks may issue loans through smart contracts instead of going through traditional processes.

Through a series of cryptographic protocols, smart contracts allow users to exchange money, property rights, shares, or anything else of value with complete transparency and without relying on trust. Smart contracts get rid of the need for middlemen and get rid of the fees that come with transferring ownership.

Salary of a Smart Contract Developer

According to Crunchbase, the average global salary for a smart contract developer is $146,259 per year. But the reality is quite different. Salaries differ across different regions.

For instance, in Singapore, where there are currently more than 491 blockchain startups, the average monthly income for a smart contract developer is $13,500, with a peak earning potential of up to $30,000.

Remote Smart Contract Developers in general earn $150k-$750k per year, depending on their skills, knowledge, and experience.

In Oceania, smart contract developers make around $75k-$100k per year for a variety of positions ranging from junior to senior. 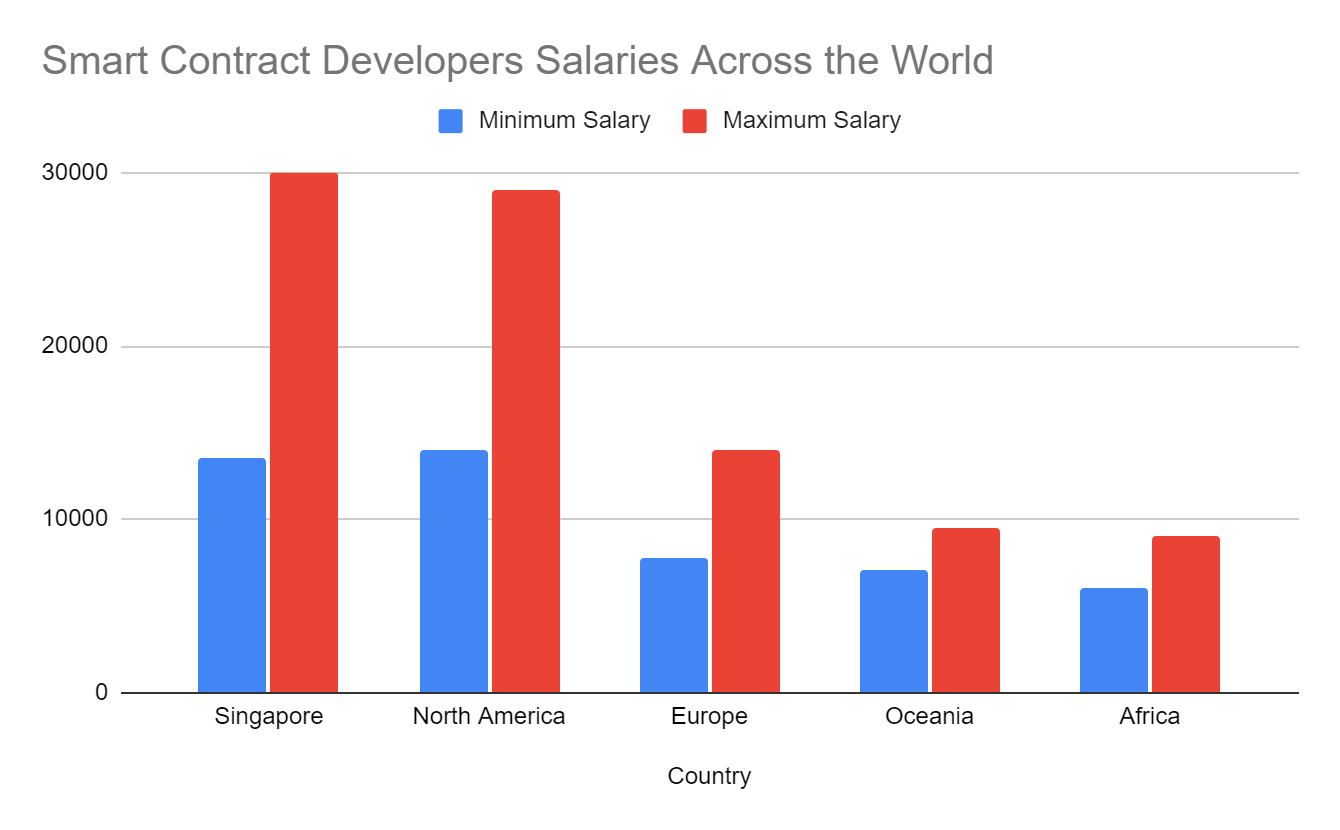 The reason why different regions have different salaries is that they have different economic climates, cultures, and economies. As of August 2022, TechBehemoths counts 700 blockchain development companies worldwide. For example, Singapore is a high-tech city with a lot of blockchain startups, while Africa is a developing region with a very low GDP. Furthermore, the cost of living varies significantly between countries, which affects the salary of a smart contract developer.

But even within the same region, a smart contract developer can still be paid quite differently. For instance, Mexican Smart Contract Developers are paid around 357K MXN/year according to Salary Explorer, while in the US, skilled professionals in the same position get around $160K/year according to Interexy.

To explain this difference, let's take a look at the qualities employers look for in a good smart contract developer.

As a smart contract developer, you will play an integral part in securing the future of cryptocurrencies. Your primary responsibility will be to build smart contracts that run smoothly, securely, and reliably. Hence, the pay package for this job depends largely on the level of skill required for the position as well as the demand for your services.

Here are the qualities that employers look for in a smart contract developer:

● Familiarity with the latest developments in blockchain technology

● Has a solid grasp of the business goals behind the project

● Understands how to manage resources effectively and efficiently

● is passionate about what they do and loves their job.

Why Do I Need to Learn Smart Contracts?

You need a combination of education and real-world experience to develop smart contracts that meet industry standards and protect investors. The largest exploit and damage, according to rekt news, is $624 million, which is more than 3,000 times the average salary of a good smart contract developer.

I spend most of my days thinking about growth in the past five years. I primarily write and talk about marketing growth strategies. At Zensite, I put the talk to the walk by building marketing strategies that help people to discover our design solution.