​​5 Fancy Google Offices Around The World

The tech behemoth from Mountain View - Google has 69+ offices around the world and almost all of them look fancy and comfort the employees for the best performance - just like any company would do, isn’t right?!

In addition, Google tries to make their offices eco-friendly, and build according to the latest standards, use green energy and reduce as much as possible greenhouse gas emissions, and other pollution sources via electricity and wastes. That’s why no matter the location Google offices around the world are one step higher than other surrounding buildings.

But how the building looks inside and outside is not the only thing that makes a Google office beautiful. People and parks also play an important role in the unseen view an office has - it gives the vibe of professionalism and coziness, which improves productivity.

So, based on the look and the feeling, here are some of the most beautiful Google Offices: 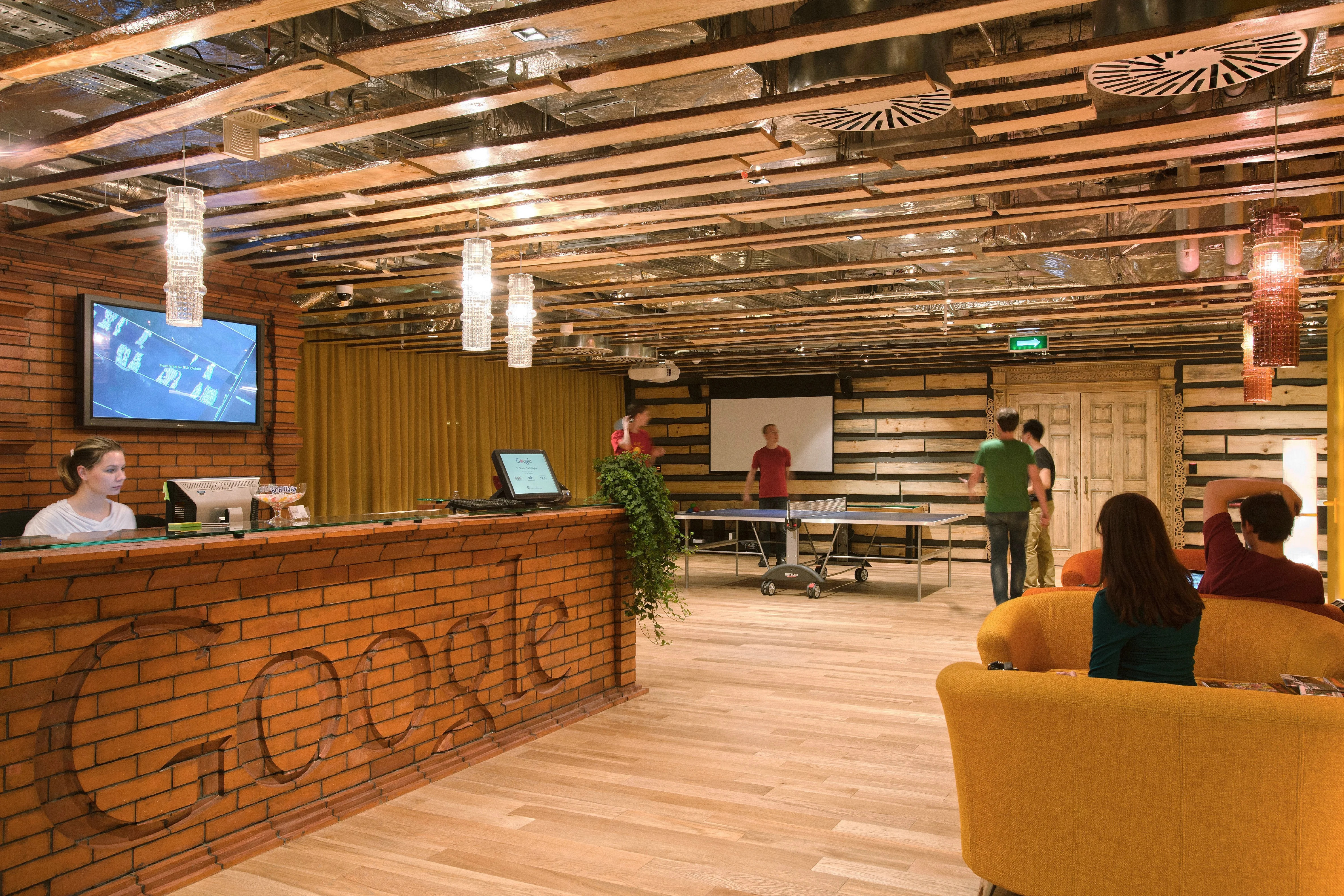 Google’s Moscow office is designed in warm colors, with a brick-like front desk and creative interior design in different shapes and forms. The office was designed according to local Googlers’ desires and preferences, and brings together several departments in one location: devs, engineers, sales and marketing are the departments that reunites local googlers into one. The design also celebrates the Russian culture with specific national and ethnic ornaments that can be seen through the office in different rooms.

At the same time, the office is fun, with ping pong tables, and video games separate room, it also has a dining room, buffet, cafeteria and multiple places for gatherings, conferences, and co-working. 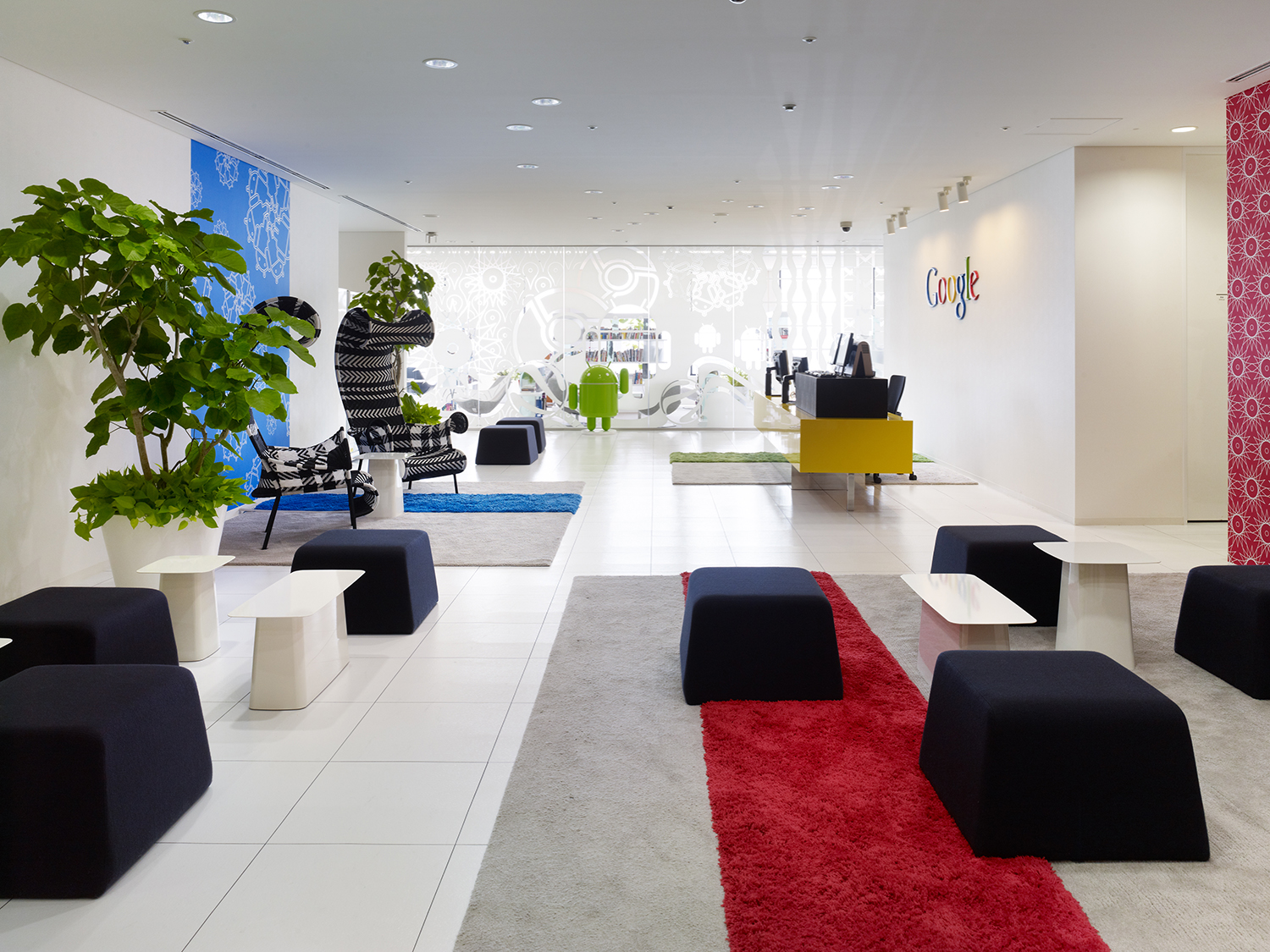 Google’s Office in Tokyo has a cultural touch inspired by traditional art which has dominant cold vibes combined with accent colors such as red and blue. Compared to the office from Moscow, Google applied a minimalist design in Tokyo which gives a spacious feeling and indeed provides more room for maneuvers and moves.

The office was designed by Klein Dytham and has 7050sqm. The design was ready in July 2010 and was applied in the same year. 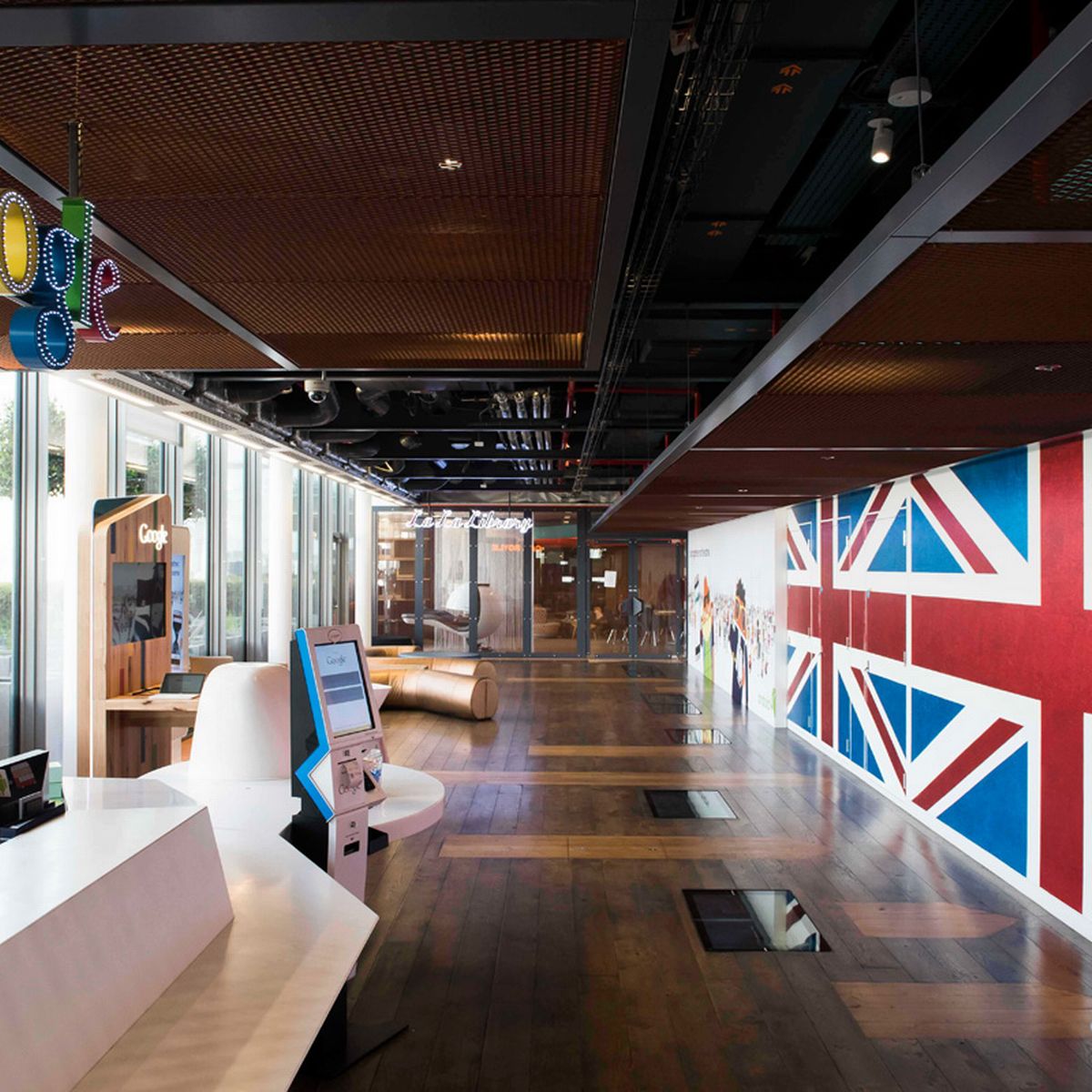 The photo above with Union Jack on the wall is only a small part of the Google office in London. It is one of the largest and most cozy and beautiful Google offices around the world, as it has several distinct features that transform the place into a Small HQ building with all facilities for local Googlers.

To be more specific, the Google office in London includes Gym, showers, dance facilities, more than 1250 desks, and meeting chairs for the staff and guests. The top floor has a hidden garden in the back of the offices, that opens a panoramic view of London which is amazing to look at both at night and in the day.

Outside the office has bike parking places for employees, which encourages less greenhouse gas emissions.

Google office in London was designed by Person Group and has an estimated surface area of 160.000 sqft. 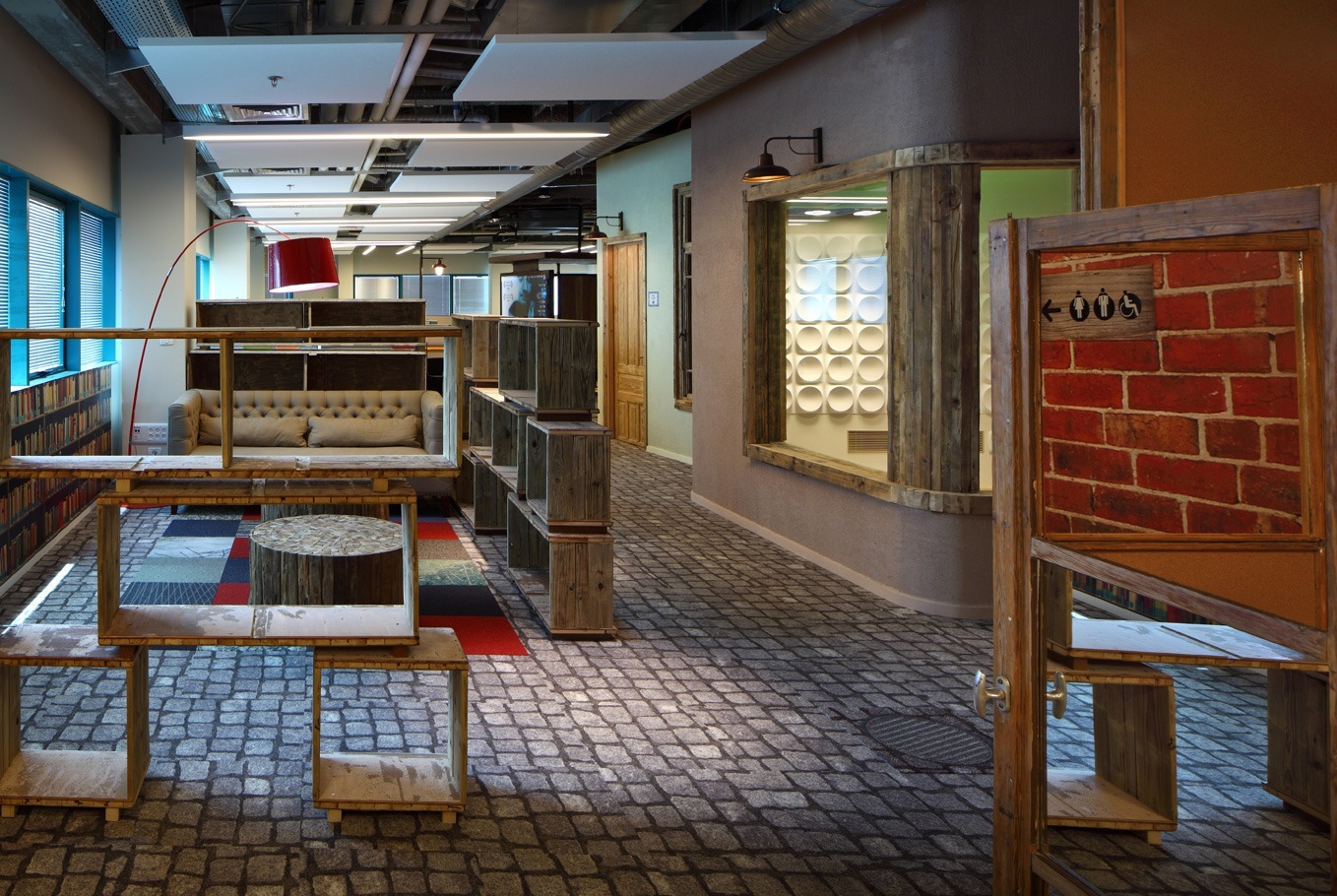 The Google office in Haifa is the second one in Israel after previously another office was opened in Tel-Aviv. The Haifa office was inspired by the city and the sea colors, combining wood, rock, and iron in a modern office that landed on an 1800 sqft area.

Despite the cold colors used, the office still looks warm and cozy mainly due to the lights and wood. All workstations are located near the window, while offices and rooms are inside the building. 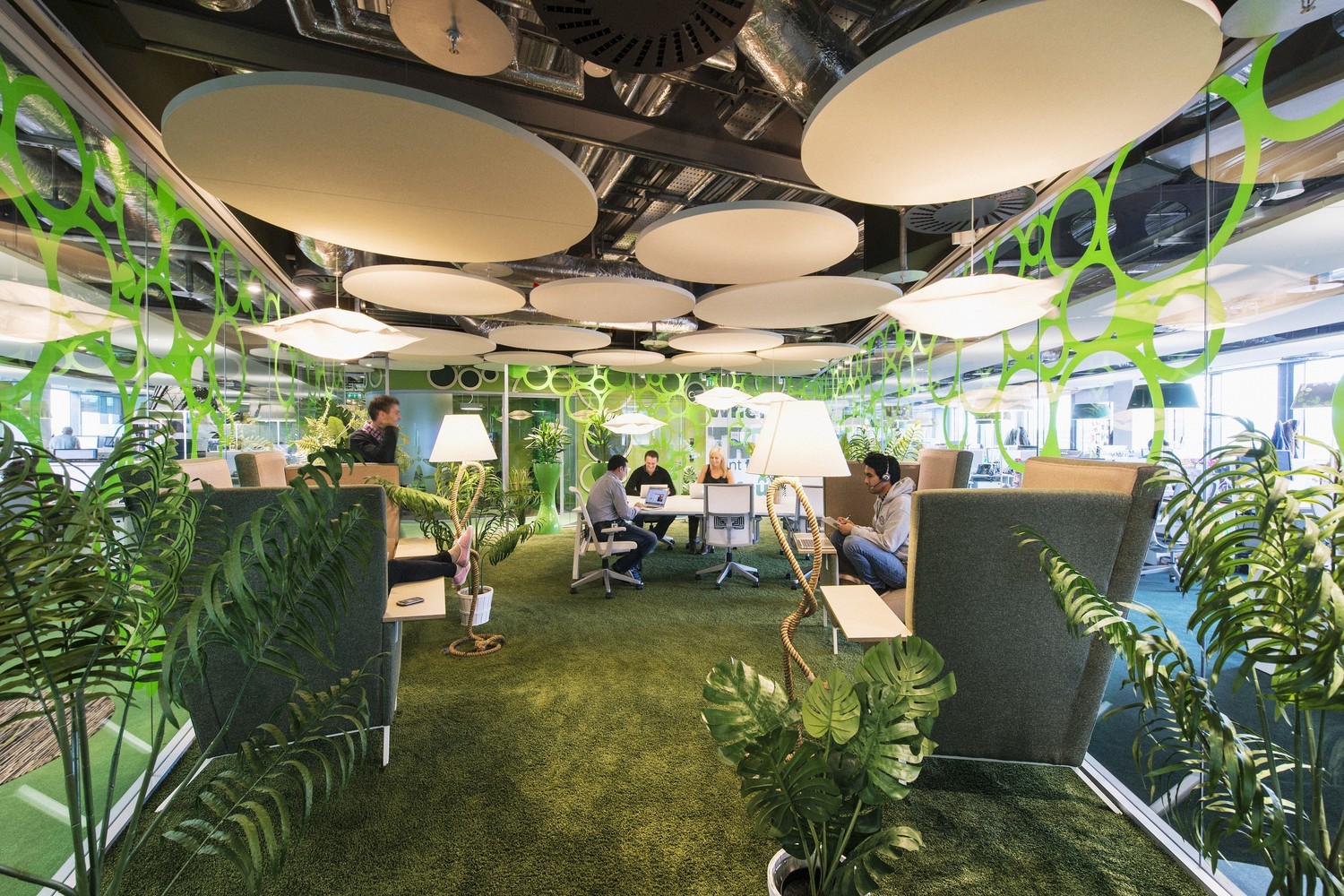 The Google office in Dublin is one of the largest offices that the tech behemoth has around the world and is dominated by the color that made Ireland famous for - St. Patricks four leaves green clover. The office hosts specialists from sales, marketing, engineering, and finance that come from 65 different countries and speak 45 languages.

The Dublin office is actually a campus, built to grow and develop most of Google’s operational activities, and is Google HQ in the European Union.

The campus managed to separate the city life and mood from Dublin and the one from the office by creating multiple entertaining and interactive places that look and feel different inside the office.

Taking into consideration the large surface area the campus is stretched on,  it has numerous facilities and features for the entire personnel. The Dublin campus hosts 5 restaurants, 42 micro-kitchens, communication hubs, gaming rooms, fitness center, pools, wellness, conference halls, learning centers, tech stops, and over 400 offices for formal and non-formal meetings.

The Google office in Dublin was designed by Evolution Design in collaboration with local architecture firm Henry J, Lyons, and became functional in 2013

As of June 2022, Google has 25 offices in Europe, and 32 offices in North America - these being the continents with the largest amount of Google offices. The largest known Google office is located in New York, USA and its surface is 270,000 sqm according to Wikipedia

Does Google have the fanciest offices out of all tech behemoths?