5 Best Paid IT Jobs in the Middle East

The Information and Technology industry generates top salaries worldwide, especially in the last 10 years. Once digitalization programs started and developed by Saudi Arabia, UAE, or Egypt, countries from the Middle East are also paying more attention and invest more in digitalization and tech. Respectively, working in IT in the Middle East is one of the most profitable and modern jobs.

In contrast, the Middle East is also known for being rich in natural resources such as oil or gas - industries that also provide worthy salaries for those enrolled in the above-mentioned fields. Yet, interconnecting IT and natural resources brought the entire region to another level and opened new opportunities and doors to innovation.

Even though it’s not fair to say that oil empowered IT, or that global trends forced Middle East countries to adopt new technologies, TechBehemoths team found that the truth is somewhere in the middle and the source of growing income for skilled IT professionals is a combination of natural resources, global trends, education and the interest of the young generation in IT.

Another important reason why IT jobs are being popular is their contribution to future development, and also sustainability. It’s the job that reassures those who are doing it that your work will always be requested on the market. According to The National, out of 10 future jobs in UAE, 4 are related to IT - a dominant part compared to other industries.

Now that we have set up the fundamental layer of our topic, let’s go to the 5 Best Paid Jobs in The Middle East.

The software developer job has a broad understanding and includes multiple programming languages and different types of skills. Abstract from this, the Software Developer Salary is one of the best-paid jobs in the Middle East countries and at the same time one of the most popular activities among all IT jobs.

As a reference, we took the data from Salary Explorer and compared it between several countries from the MENA (the Middle East and North Africa) region. Here are the data

For a better understanding and comparison, there is a graphical representation of the average software developer salaries in the Middle East and North Africa Region 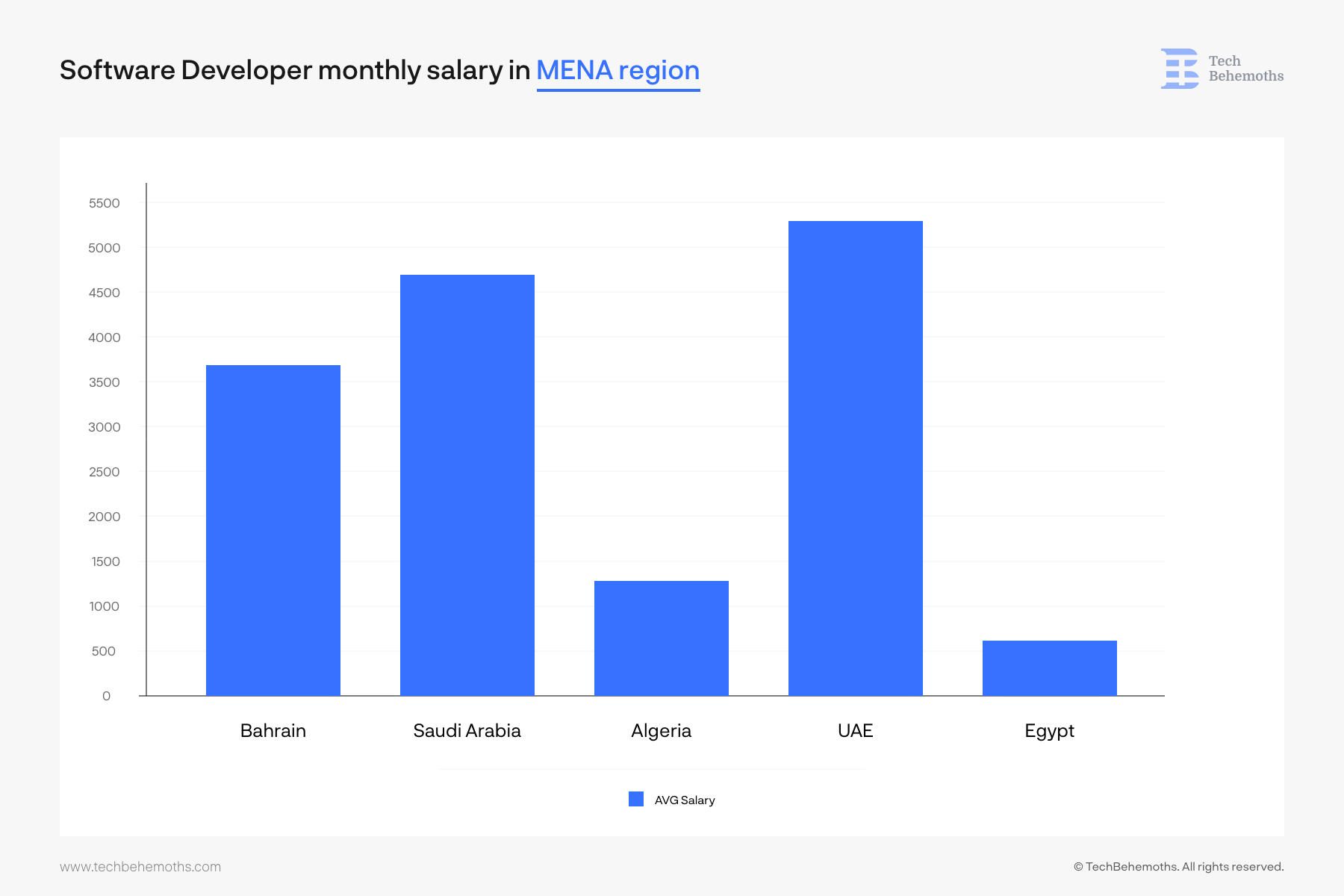 According to the source and the chart above, we can notice that the average salaries of software developers in the UAE are surpassing the ones from Saudi Arabia by 10% and are almost 10 times higher than the ones from Egypt.

AI has become one of the hottest topics in the IT market ever since it has appeared. The AI developers are getting better paid compared to other fields mostly because the Artificial Intelligence progress opened new doors to multiple industries such as medicine, fintech, marketing, and even agriculture.  Now, in the MENA region countries like UAE and Egypt are researching the topic and implementing AI technologies on a large scale, which makes the job in the region one of the best-paid.

According to the data from the same Salary Explorer, here are the average monthly salaries for AI developers in several Middle Eastern countries:

For comparison check the chart below: 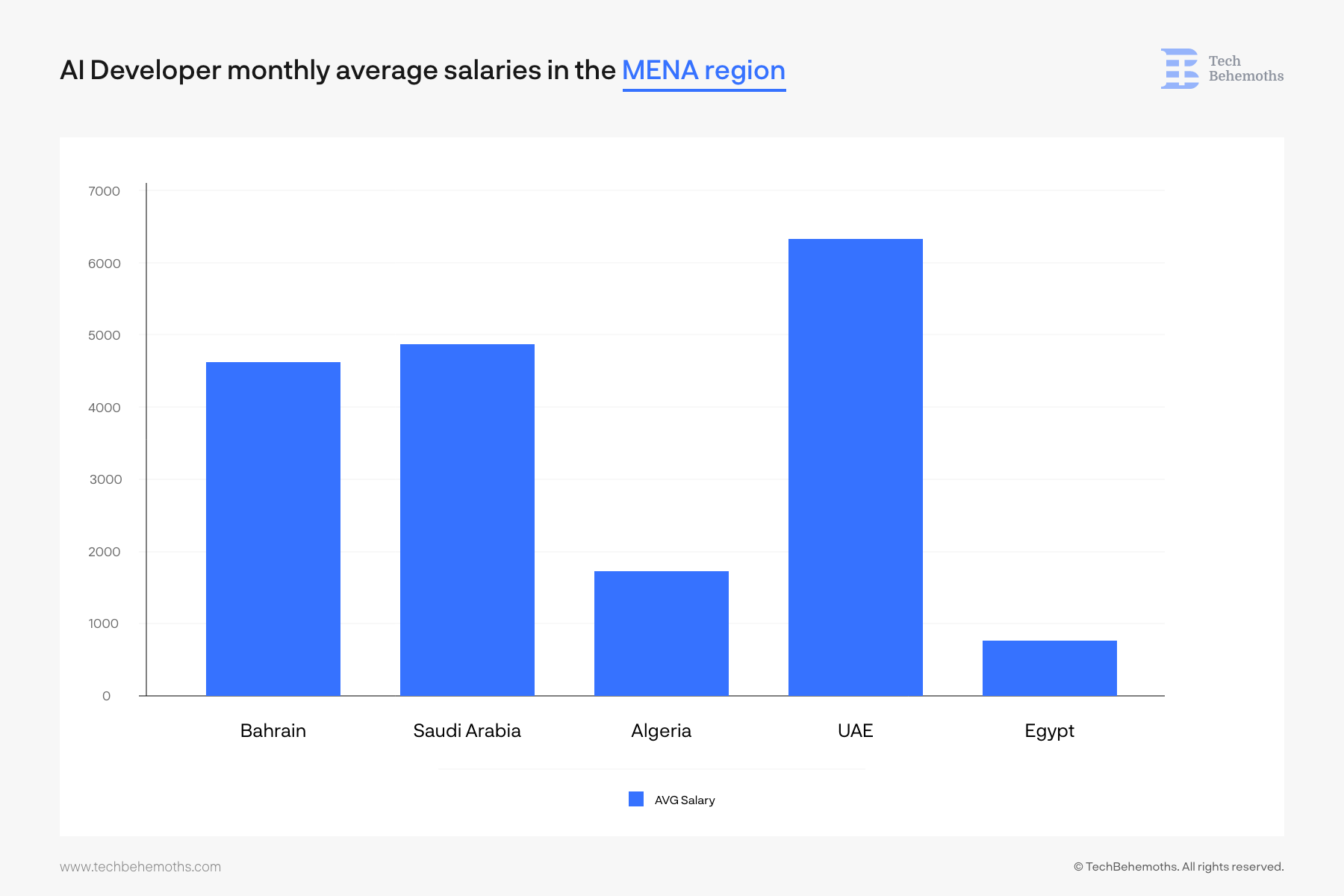 Surprisingly QA engineers are one of the best paid IT jobs in the Middle East countries and when it comes to wages it is comparable with Software Developer salaries. While the devs are building the entire software, QA’s are responsible for the entire process and methods used - and that explains a lot.

Here are the numbers of QA Engineers monthly salaries in different Middle Eastern countries according to Salary Explorer: 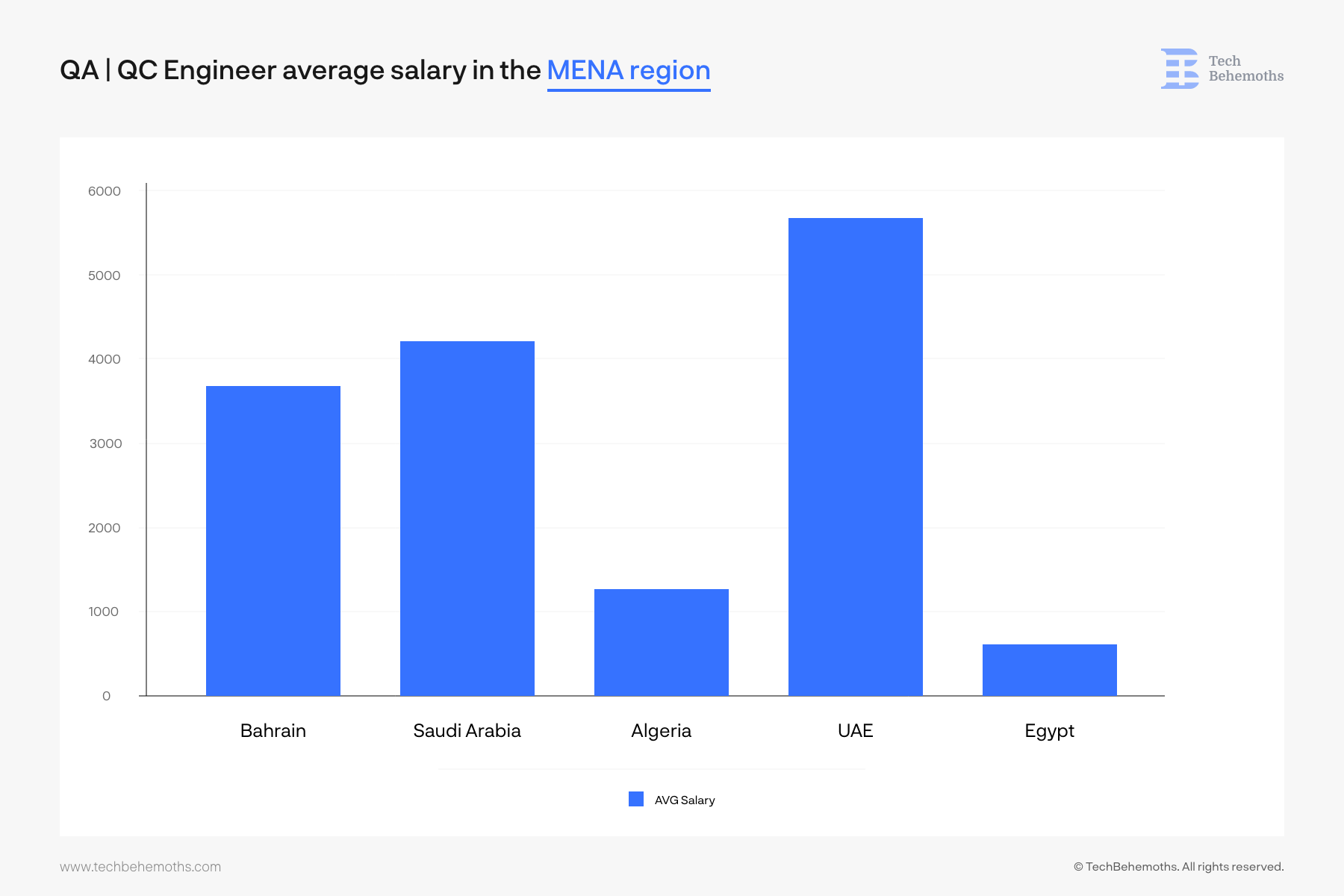 Stable technology connections and management is performed by network engineers that are fairly paid in countries from the Middle East. It is indeed one of the most popular jobs in the region, and it has a vital role in the entire IT infrastructure.

Network Engineers plan, construct, and manage networks to ensure they're optimized and functioning as intended. It may be categorized as a technical management job focused on monitoring and controlling data processes. With this in mind, here are their monthly average salaries in different countries from the Middle East according to salary explorer: 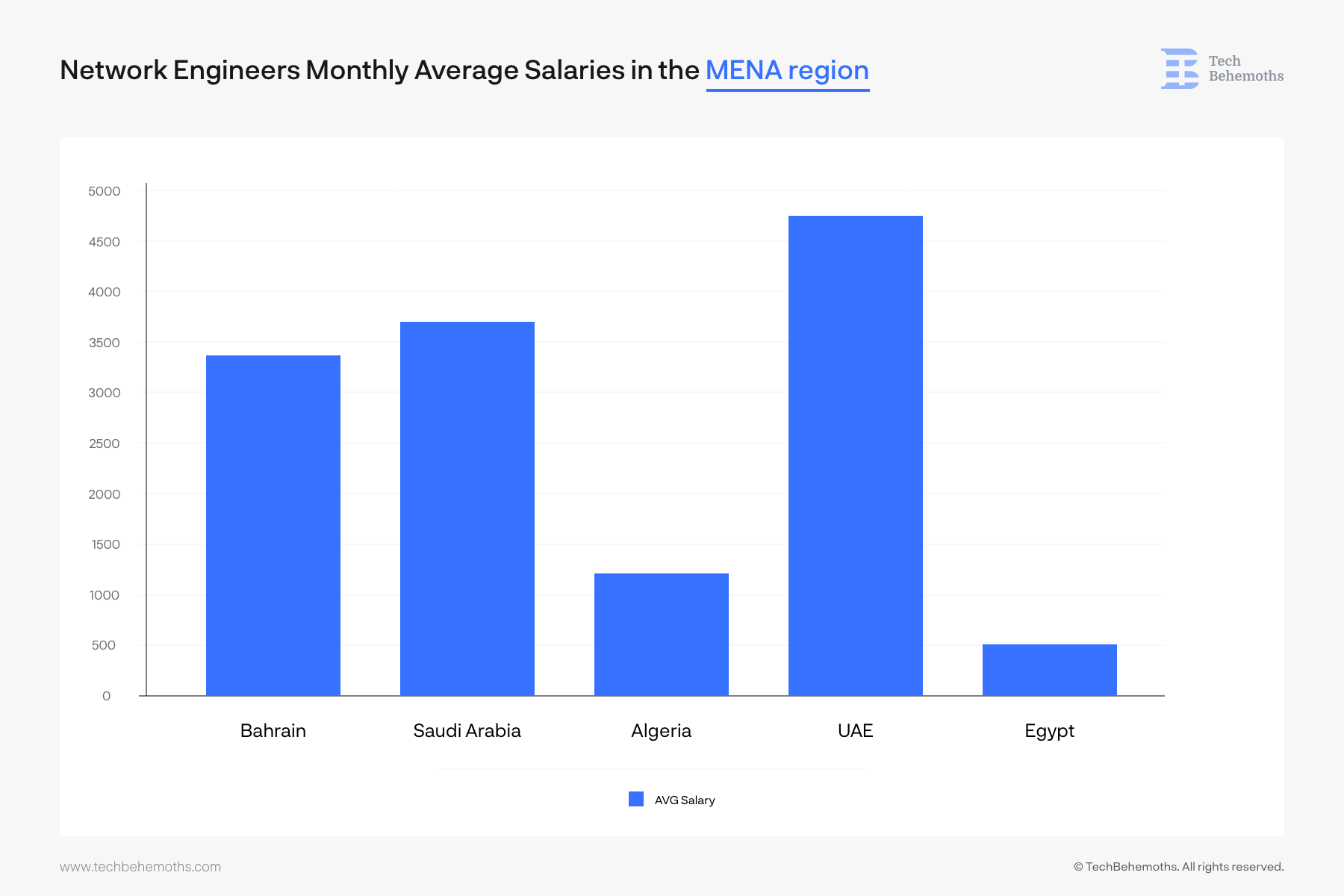 In the case of Network Engineers salaries, the trends are the same but the differences are slightly smaller than in the previous cases. For example, Egyptian Network Engineers are getting only 9 times lower salaries compared to those working in the UAE. Other IT jobs reveal a 10 times difference between these two countries.

UX Designers are probably some of the most underrated professionals in the top 5 best-paid specialists in the Middle Eastern countries. Even though their experience and skills are vital to almost any web or mobile digital project, they get lower wages overall.

According to salary explorer, here are the average monthly salaries UX designers get in the MENA region:

In the graphic chart below, we notice that the salaries trends among the countries are pretty much the same, but again the differences between the highest to lowest salaries are smaller than in previous cases. Now that the numbers are all set, it’s time to wrap up everything and draw the lines. The average wages in IT are higher in the UAE compared to the rest of the countries in the neighborhood. Yet, Saudi Arabia and Bahrain close to taking the leading position with a 17%-12% difference from the UAE.

On the other hand, Algeria and Egypt provide among the lowest wages for IT specialists in the region, and surprisingly Algeria pays double compared to Egypt for the same services (According to Salary Explorer Data)*

Of course, the MENA region includes 17 countries, but in our research, we took the most different ones as economy model, business performance, IT infrastructure development, and worldwide IT notoriety. 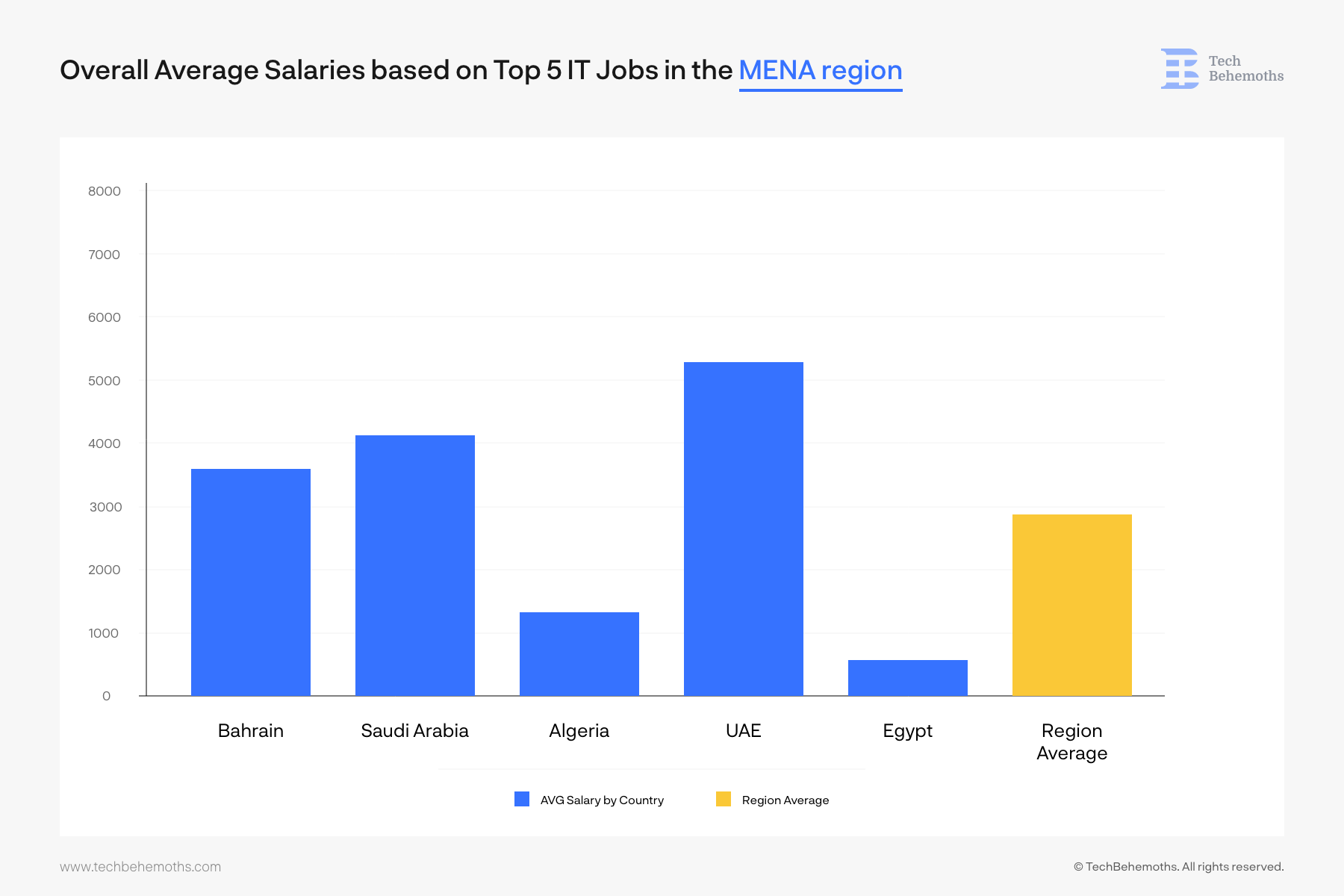 The Middle East IT market is unpredictable when it comes to salaries. However, each country pays its tech specialists fair enough for work volume and market demands. Probably the Egyptian wages in IT are comparably low due to BPO activity in the country.

Nonetheless, the wages in IT remain one of the leading in the region and are constantly growing. This is good news for the young generations mainly because more and more youngsters are attracted by this industry and the digital market.